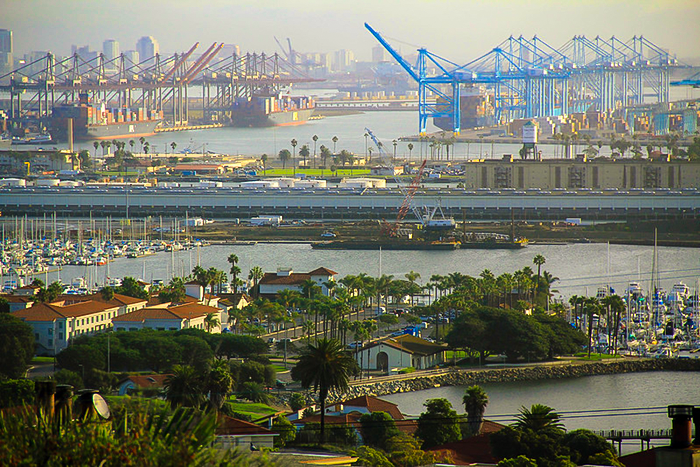 Non-vessel operating common carriers (NVOs) and forwarders say the impact of the coronavirus disease 2019 (COVID-19) on trans-Pacific container trade has been less disruptive than West Coast labor disruptions in 2014 and 2015 and the collapse of Hanjin Shipping in 2016.

But while they’re grappling with a few penalties and other fees, NVOs and forwarders tell JOC.com they’re bracing for a recovery in volume that they help will be more gradual than sharp — i.e., “U-shaped” rather than “V-shaped” — to minimize the congestion in terminals and strain on equipment pools.

The labor disruptions in 2014-15 and Hanjin’s bankruptcy in 2016 caused far greater financial damage in terms of penalties and escalating chassis charges, according to three NVOs, while coronavirus has caused a smaller impact on invoice rates so far. They hope that whenever volumes return they will be able to avoid a repeat of events such as the recent supply chain slowdowns in January 2019 when some chassis pools ran out of equipment.

Coronavirus has forced some US terminal operators to cut hours, as well as place restrictions on the return of empty containers. Some terminals won’t accept returns of certain ocean carrier boxes, while others will only accept if the driver also retrieves an import, known as a dual transaction.

Blank sailings exacerbate the problem because no vessels arrive to take empty boxes back to Asia. The Los Angeles-Long Beach port complex, for example, will experience more than 40 blank sailings in February and March, Gene Seroka, executive director at the Port of Los Angeles, told the DrayTech conference in Long Beach March 5. Without vessel calls to bring imports or take empty boxes and loaded exports to Asia, terminal operators have cut hours to save on labor costs.

A resolution seems to be on the horizon, however, as the 2M Alliance of Maersk Line and Mediterranean Shipping Co. will deploy four mega-ships to Los Angeles and Long Beach this month and next month to take exports and empty containers out of the US. Earlier this week, the 19,000-TEU MSC Oscar called APM Terminals Pier 400 in Los Angeles to pick up outbound export containers and empties.

Truckers hope this will alleviate logistical headaches outlined in a letter sent to the Federal Maritime Commission last week. The Harbor Trucking Association told the federal agency that it’s unreasonable for ocean carriers to penalize cargo owners for detaining equipment if there are no return locations available.

FMC Commissioner Daniel Maffei said it would be unfair to abuse a public health crisis for financial advantage.

“Right now, I believe most ocean carriers and marine terminal operators are acting responsibly and fairly in these challenging conditions,” he said in a statement March 12. “As one industry leader expressed to me, the approach should be to proceed with restraint, common sense, and collaboration. We all should follow that advice.”

Container carriers Ocean Network Express (ONE), APL, Maersk Line, and OOCL have waived detention fees, according to Kevin Bulger, chief operating officer for Apex Maritime Co., which he said is “half the battle.” What remains is the cost of offsite container storage and escalating chassis fees not covered by the ocean carriers.

“We don’t know the full impact because we haven’t received all the invoices yet. That will be coming soon,” Bulger said.

During the Hanjin bankruptcy, cargo owners and trucking companies waited weeks — even months — to return containers because locations were unavailable. Depots were reluctant to accept containers of a defunct ocean carrier who may or may not pay the bill. Chassis were trapped underneath until the trucking company could ground the container.

Sean Daly, director of international services with ROAR Logistics, said during the coronavirus disruption, boxes and chassis have been returned a few days late.

He said the uncertainty around when conditions will return to normal is frustrating, but otherwise this disruption is nowhere near as bad as previous meltdowns on the West Coast.

On a 1 to 10 scale, with 10 representing a major disruption and 1 being a minor inconvenience, all three NVO executives ranked the coronavirus as a 3. The labor strife involving the International Longshore and Warehouse Union (ILWU) and their terminal operator employers in 2014 and 2015 ranked as a 7 or an 8, in their opinion. Hanjin was close to a 10.

Bulger cited the “chassis meltdown in Memphis in January 2019, when containers were not moving for weeks,” as another example of a more disruptive event in terms of supply chain fluidity. “It’s certainly not at the same magnitude as that, but it is a pain because of the extra work for the trucking community,” he said.

Disruptions and cargo delays on the West Coast are relatively common, said Daly, adding that this has forced ROAR to be nimble and build significant contingencies into its shipment planning.

“Every other year we're dealing with something. And so we just need to make sure that we're prepared to mitigate it. And so it's definitely shifted our strategy over the last few years, but it's worked out to our benefit,” he said.

All three NVOs agreed the disruption seems to be easing and that the situation should normalize soon. The unanswered questions are when exactly, and how intense will be the recovery? Will it cause the kind of congestion Rooney alluded to?

“The thought has been that as China ramps back up, they can only push out so much cargo with restrictions on equipment, raw materials. There are only so many hours in the week. The volume swing may be more U-shaped than V-shaped, or gradual versus sharp,” said Patrick Maher, executive vice president of Gulf Winds International, a Texas-based drayage, transloading, and warehousing provider.

Shippers may be hoping for a sudden influx of capacity, but supply chains would benefit from a more gradual recovery, as sudden spikes can overwhelm port terminals, intermodal networks, rail yards, and chassis networks. For example, several industry analysts have attributed congestion in December 2018 and January 2019 to how quickly volumes rose and the inability of the supply chain to handle such a sudden burst of cargo.