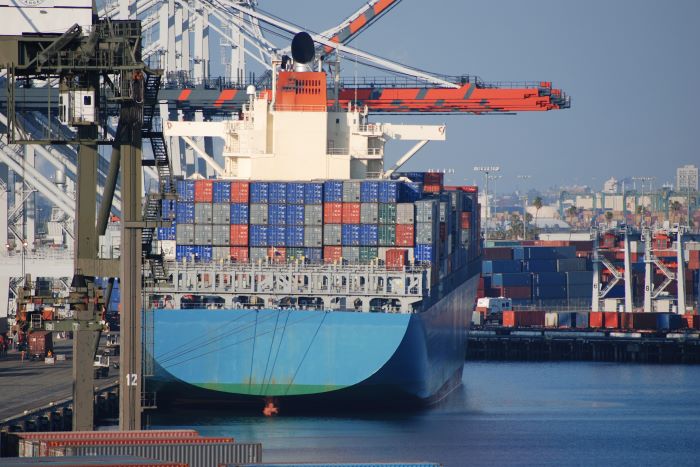 While use of the GE Transportation Port Optimizer is rising at the Port of Los Angeles, some companies remain hesitant to share their data. Photo credit: Shutterstock.com.

After more than three years of development, the GE Transportation Port Optimizer is ramping up usage, but stakeholder skepticism is preventing the collection of enough data to provide true cargo visibility throughout the supply chain in Southern California.

GE Transportation’s goal is the creation of a single window for beneficial cargo owners (BCOs), truckers, and non-vessel-operating common carriers (NVOs) so they will have real-time cargo visibility and predictability across all 12 container terminals in Los Angeles-Long Beach.

But Brian Hill, the company’s senior product manager, said: “We’re not there yet.”

Despite an attempt this past year by the Port of Los Angeles to incentivize carriers to share more data and convince terminal operators, BCOs, equipment providers, and other stakeholders to do the same, there is still a strong belief among some companies in the private sector that their data should remain proprietary because it gives companies that possess it a competitive advantage.

The Port Optimizer, a cloud-based platform, collects data from more than 70 sources on vessel arrivals, container availability, marine terminal operating conditions, gate fluidity, and other logistics factors. It provides a single window through which BCOs, NVOs, and truckers can schedule appointments to take delivery of containers given real-time conditions at the terminals. Beyond providing real-time visibility in shipments, the ultimate goal is predictability.

“We must go beyond just, ‘Where’s my box?’, although that is still the critical question,” Hill said. GE Transportation rolled out 26 new features in 2018 and will do about the same number of releases this year, he said, as the Port Optimizer progresses toward predictive and prescriptive analytics.

The Port Optimizer already shares shipment data provided by carriers and some federal agencies, such as Customs and Border Protection, that allows BCOs to predict when their containers will be ready for pickup as much as 14 days before vessel arrival. At some terminals, BCOs are able to shift plans when exceptions occur.

GE Transportation intends to continue expanding the product by incorporating machine learning for predictive and prescriptive analytics, but greater participation throughout the 12-terminal port complex is needed, he said.

European ports were the first developers of port information portals, but US ports and terminal operators have chosen not to adopt the European model, Hill said. GE Transportation has met with some European ports to view their products, but the Port Optimizer was developed based on numerous meetings with BCOs and harbor truckers around the United States to determine what their needs are, and to tailor a product based on local requirements. More than 50 BCOs have signed up for the Port Optimizer.

A pilot project was launched in 2016 at a single terminal, with the Port of Los Angeles as GE Transportation’s partner. The port also helped fund the pilot. Last year, the Port Optimizer was expanded to all six container terminals in Los Angeles. It has attracted limited participation by Long Beach terminals, although Advent/eModal’s port platform has had a foothold in Long Beach for more than a decade.

There remains a concern among technology providers and some terminal operators that GE Transportation intends to replace their proprietary products as a single information portal for the entire port complex. Hill said that is not the case.

“We’re not a TOS [terminal operating system]. We’re not a TMS [transportation management system]. We will pursue a partnership with any company,” Hill said.

Nevertheless, the dozens of carriers, terminal operators, equipment providers, and other holders of proprietary information are not all on board with the single-window concept, either because they feel they can obtain sufficient data on their own to fill their needs, or because they fear that by sharing their data others will use it for their own purposes. Hill said he constantly attempts to assure potential users their data will be secure. “Data stewardship is critical,” he said.

On the other hand, Hill said each stakeholder has a “great set of data,” and convincing companies to break out of their silos would benefit the entire supply chain. Data sharing is critical today as ports are served by ever-larger vessels with container exchanges well in excess of 10,000 per vessel call. These cargo surges create bottlenecks alongside the vessels, within the yards, and at the gates, directly or indirectly affecting all port users.

This has resulted in what Hill termed an “era of interdependence” among stakeholders at many ports.

As an extreme example, Chris Chase, marketing manager at the Port of Los Angeles, told the annual Footwear Trade Distribution and Customs conference Monday in Long Beach that a Maersk vessel recently discharged and reloaded 100 percent of its containers, generating an exchange of 29,205 TEU in a single vessel call.

“How do you eliminate those bottlenecks? You do all of that through data,” he said.

As the Port Optimizer expands its data points and attracts more users, Hill said information will be shared “computer to computer” through application programming interfaces (APIs) without the need for human intervention. The use of APIs is inline with the natural progression of digital communication, which has gone from paper to electronic data interchange (EDI) to APIs and eventually to blockchain, he said.