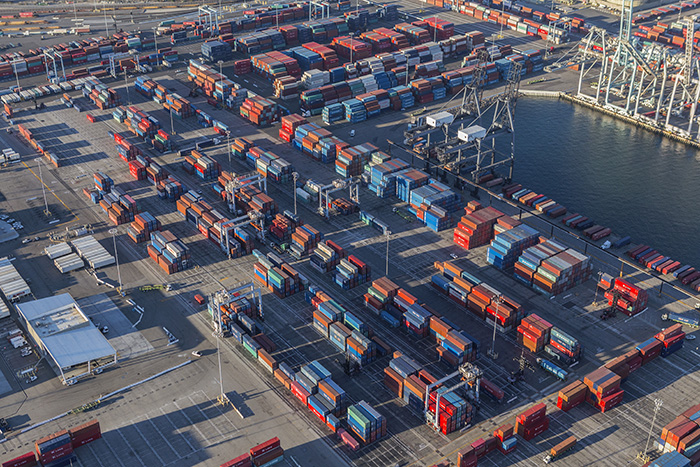 The Port of Long Beach is determining whether to follow the lead of Los Angeles and form a partnership with GE Transportation for its Port Optimizer platform, or stick with an existing port community system, raising questions about how much data the port community needs and how much money users are willing to pay for that data.

These questions are important for all major US container ports as they consider developing information portals to combat congestion problems caused by large vessels of 12,000 TEU capacity and greater, operated by carriers in three vessel-sharing alliances, with dozens of trucking companies and multiple chassis providers operating in an increasingly complex supply chain.

It’s a dilemma for Long Beach because four of its six terminal operator tenants are already using a platform provided by Advent/eModal. They say the eModal port community system is already providing port users with the shipment data they need. eModal has operated its system at East and West coast ports for almost 20 years.

Beneficial cargo owners (BCOs) and transportation companies agree that real-time visibility into the status of containers will help to mitigate congestion at the largest US port complex, which last year handled 17.5 million laden and empty containers. The average container dwell time in Los Angeles-Long Beach in January was 4.3 days, a full day longer than in December, according to the Pacific Merchant Shipping Association, and turn times in January averaged 98 minutes, compared with less than 80 minutes for most of 2018, according to the Harbor Trucking Association (HTA).

Weston LaBar, CEO of the HTA, said Los Angeles-Long Beach is the most complicated US gateway in which to operate. Served by 12 marine terminals, all three ocean carrier alliances, and 1,400 trucking companies, the complex cries out for a “single aggregation point” to accumulate and dispense data on cargo status. However, if trucking companies, which operate on slim margins, are going to sign on, technology providers must present a clear business model that offers value to subscribers, he said. “If you charge a trucker a dollar, you better save him two dollars.”

At many ports, BCOs, truckers, and other service providers lose track of containers once they are discharged from the vessel, so the data points required on individual containers include Customs release status; available trucking appointment slots and whether the appointment can be made via the platform; and any fees due, such as demurrage, and whether they can be paid via the platform.

Los Angeles has been talking to GE Transportation about developing a port information portal for almost four years now, Gene Seroka, the port’s CEO, said Tuesday. Last year, the harbor commission approved an appropriation of $13 million to help pilot the Port Optimizer with two shipping lines, a terminal operator, and a handful of BCOs and trucking companies. In late January, the Port Optimizer was rolled out at all of the six container terminals in Los Angeles, and GE Transportation is adding users steadily, with about 50 BCOs signed up to date, according to David Casey, senior director of port solutions.

Casey said GE Transportation rolled out its “full operation” of the Port Optimizer in late January, so it is too soon for data on the results. He noted, though, that since last year, GE Transportation has produced 22 different software releases based on what the port community asked for, and some truck dispatchers reported they saved two to three hours a day during the pilot stage and that they are receiving the container visibility status they require.

In his presentation to the Long Beach harbor commission Monday, Allen Thomas, chief strategy officer at Advent Intermodal Solutions, urged the board not to form a partnership with GE Transportation the way Los Angeles did. Long Beach should first go through a formal request for proposals, or it risks locking out Advent/eModal and other platform providers, he said.

Thomas noted that eModal has been providing information services at more than a dozen ports on the West and East coasts for almost two decades now. The basic data that BCOs and truckers need, such as container availability, Customs holds, trucker appointments, and fee payments, are processed every day by eModal, he said.

Total Terminals International (TTI) in Long Beach uses eModal, and Daniel Bergman, vice president of operations, said eModal provides the services directly to users. “TTI doesn’t have to do anything,” he said. When a trucker checks on the status of a container, makes an appointment, or pays a demurrage fee, the trucker does so through eModal, Bergman said.

SSA Marine, which is a part owner of eModal, uses the port community system at its three container terminals in Long Beach and at its terminals in Oakland and Seattle, said Ed DeNike, president of SSA Containers. “It’s an immense help,” DeNike said, adding that he does not believe BCOs and truckers could get the seamless services they need at SSA facilities without the eModal platform.

Potential users of the GE Transportation Port Optimizer question how much data they really need to gain visibility to their shipments, how far in advance they need it, and how much they will eventually have to pay for that information. As more software rollouts are made, GE Transportation is positioning the Port Optimizer to offer more data from more sources to more users further out in the supply chain than eModal does. The Port Optimizer is making such offerings because that is what users want. “It was built by the users,” Seroka said. An increasing number of users want specific data sets as early as 10 days to two weeks before a vessel berths in Los Angeles because they need the information to prepare their labor and assets for the arrival of their shipments, he said.

However, non-users of the Port Optimizer are concerned that they will lose control of their data to GE Transportation, saying the contract states that GE Transportation owns the data. They charge that the data can be used for competitive purposes, such as to highlight truck turn-times at a non-Port Optimizer terminal that may be longer than at a terminal that uses the platform.

That was the same argument terminal operators in Los Angeles-Long Beach used more than five years ago to oppose the HTA’s truck mobility data project, said Alex Cherin, executive director of the California Trucking Association’s (CTA’s) Intermodal Conference. The individual terminals at first opposed the project because they feared it would publicly shame some terminals while promoting others simply by publishing truck visit times each month. Six years later, those same terminals use the data as the basis of their collaboration efforts with truckers to improve efficiency for both the terminals and the truckers, Cherin said.

Casey said the fears of GE Transportation using the data it collects for anything other than improving cargo velocity in the harbor are unfounded because the company does not own the data. “GE is a steward of the data. That’s true across all GE platforms,” he said. Seroka added that even though it partnered with GE Transportation to develop and pilot the Port Optimizer, the port is not involved with any information collected. “The port of Los Angeles doesn’t touch the data,” he said.

Who will pay for Port Optimizer services and how the payments will be structured is still under study. Brian Hill, digital solutions director at GE Transportation, told the Western Cargo conference of brokers and forwarders in Palm Springs in October that subscription fees and/or transactional fees were under consideration.

The Long Beach harbor commission has heard presentations on the portal projects at three meetings, and staff continue to meet with GE Transportation and eModal representatives, said Noel Hacegaba, the port’s deputy executive director and chief operating officer. The board has not yet decided if it will partner with one or the other, nor has it decided if Long Beach will appropriate money for an information portal, he said.

“We’re interested in a platform that works and offers operational excellence. Our interest is to see that the container hand-off points become more efficient,” Hacegaba said.

The HTA is not taking sides as to which product wins out. LaBar said GE Transportation and eModal both have good products, and he does not see any reason why they should be mutually exclusive. “We could be in a world where truckers subscribe to one system, or to both,” he said.

However, that scenario would negate the original concept of a single port information portal, said Cherin of the CTA. “Having one common portal is the goal. CTA has been talking about this for three years,” he said.

This is a very interesting

Permalink Submitted by Linda.masondo@y... on Mar 16, 2019 4:14AM EDT
This is a very interesting article and I wish Southern African ports would get access to such portals, it would really help reduce congestion at most of our ports. And hopefully JOC will have similar aticles about Southern African ports.
Port News›US Ports›Port of Long Beach
Port News›Port Productivity
Port News›US Ports›Port of Los Angeles
North America›United States