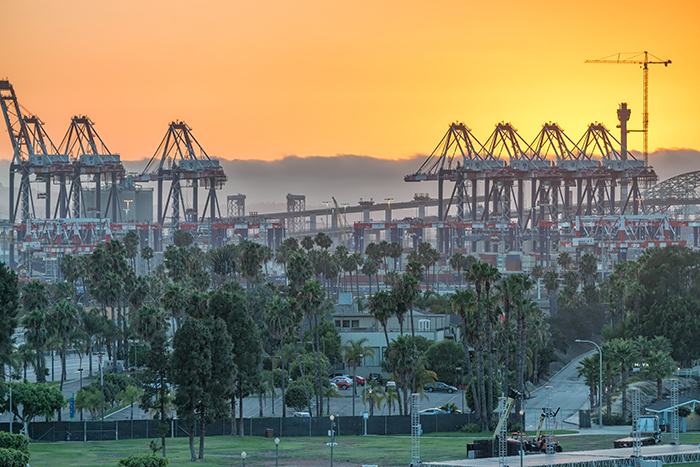 Once complete, the Long Beach Container Terminal (LBCT) will cover about 306 acres and have an annual handling capacity of 3.3 million TEU. Photo credit: Shutterstock.com.

Macquarie Infrastructure Partners has expanded its US footprint beyond the East Coast to the West Coast through the $1.78 billion purchase of Long Beach Container Terminal (LBCT) from Hong Kong's Orient Overseas (International) Limited (OOIL).

OOIL, the parent of ocean carrier OOCL, agreed to sell its Long Beach terminal to the Australian banking and investment group following a Committee on Foreign Investment in the US (CFIUS) review of OOIL's $6.3 billion takeover by China's Cosco Shipping Holdings in 2018. While the terminal sale was not one of the five conditions of the merger going ahead, the disposal was seen as crucial to the US government giving the tacit green light to Cosco's acquisition of OOIL.

Under the terms of the deal, OOCL will enter into a 20-year container stevedore and terminal services agreement to allow its container ships to continue calling at LBCT. LBCT operates the Middle Harbour facility, the first two phases of which opened in 2016. Overall completion of the terminal, which is being built by the Port of Long Beach, is scheduled for 2022, when it will cover about 306 acres and have a capacity to handle 3.3 million TEU annually.

The latter formally committed to divest the LBCT business in a national security agreement signed on July 6 last year between OOIL, Cosco Shipping subsidiary Faulkner Global Holdings, the Department of Homeland Security, and the Department of Justice. US officials were concerned about the dominant position Chinese government-backed Cosco would hold in terms of container throughput and port-handling capacity in California if it was allowed to take ownership of the Long Beach terminal. Cosco holds a 51 percent stake in Pacific Maritime Services, which operates the Pacific Container Terminal in Long Beach, as well as a 100 percent stake in the West Basin Container Terminal in Los Angeles.

The acquisition came five months after OOIL officially kicked off the sale process, which is believed to also have attracted interest from private equity groups KKR & Co. and EQT Partners.

For Macquarie, which has stakes in New Jersey's Maher Terminals at Port Elizabeth and Penn Terminals, buying LBCT gives it port assets on the US West and East coasts.

“We are pleased to acquire LBCT, a premier terminal in the largest port complex in North America, which serves as a gateway for trans-Pacific trade. We are also committed to completing the current expansion of LBCT by 2022, which will significantly increase the capacity of the terminal,” said Karl Kuchel, Macquarie Infrastructure Partners chief executive.

Globally, Macquarie owns stakes in Busan New Port phases 2-3 in South Korea, Fraser Surrey Docks in Vancouver, Canada, and terminals at Nanjing and Tianjin in China. The firm is currently selling the Halterm terminal at the port of Halifax.