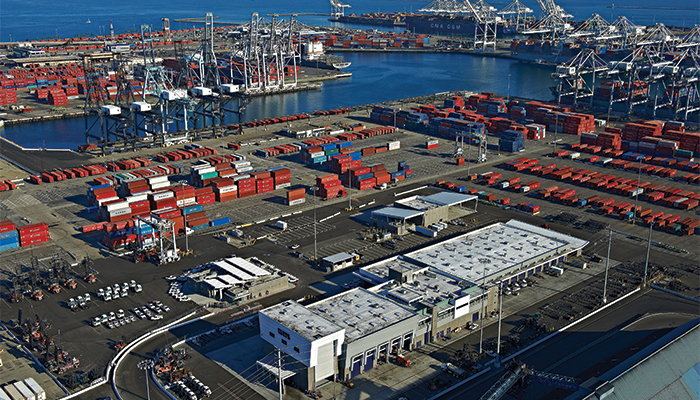 The Port of Long Beach with the PierPass facility in the foreground. Photo credit: PierPass.

Cargo interests and US truckers should know by early April if the PierPass extended-gates program in Los Angeles-Long Beach, now in its 13th year, will be restructured to incorporate a flat fee coupled with trucker appointments.

PierPass has its supporters and detractors, but port users agree that the largest US gateway could not handle 17 million TEU per year without a regular schedule of night and weekend gates. Because many ports also struggle to handle record cargo volumes carried by 10,000 to 14,000 TEU mega-ships, a successful program in Southern California could serve as a template for other ports seeking to establish a cost-effective program of extended gates.

The 12 container terminal operators in Los Angeles-Long Beach are assessing the options contained in a study released in early March by Tioga/WCL Consulting. The report followed months of meetings with terminal operators, truckers, beneficial cargo owners (BCOs), and cargo intermediaries that analyzed the pros and cons of the PierPass off-peak program.

Truckers bear the brunt of delays

Truckers bear the brunt of delays at marine terminals, and they generally agree that the report — which leans toward a lower, flat fee, a portwide trucker appointment regime, and greater BCO participation in container peel-off programs at individual terminals — addresses most of their goals. “It’s much of what we’ve been asking for the past three years,” said Weston LaBar, CEO of the Harbor Trucking Association.

Container terminal operators who are members of the West Coast Marine Terminal Operators Association must make the final decision on how the off-peak program will be restructured because the association’s agreement with the Federal Maritime Commission specifies that the terminal operators can only discuss matters involving rate setting among themselves and not with outside parties such as BCOs and truckers, PierPass president John Cushing said.

Cushing noted that since 2005 the off-peak program has accomplished its major goal of helping the ports handle growing cargo volumes and larger vessels while mitigating congestion on local freeways through a regular schedule of four weeknight gates and one weekend gate. A traffic-mitigation fee of $144.14 per FEU covers about 81 percent of the additional costs terminals face for running five off-peak gates each week, according to the study.

Despite mitigating traffic impacts and allowing the ports to grow without having to build costly new terminals, periods of congestion are common daily. The study found long truck lines at the beginning of the first shift and especially in late afternoon when the first shift ends at 5 p.m. until the second shift begins at 6 p.m. The traffic-mitigation fee that BCOs pay runs through 6 p.m. on weekdays, and it contributes to congestion and trucker delays in two ways, LaBar said. Some truckers enter the terminal as early as 4 p.m. and remain inside until the fee is no longer charged at 6 p.m.

Many truckers simply line up at the terminal gates in the late afternoon and park there for an hour or two until 6 p.m.

A proposal for a flat fee

The study lists a proposal to replace the traffic-mitigation fee that BCOs pay only for peak-period moves with a lower, flat fee that would be charged on all truck moves, day and night. The study did not recommend what the lower flat fee should be. When Oakland International Container Terminal in 2016 established its extended-gates program, it assessed a flat fee of $30 per container whether the containers move during the day or at night.

Mandatory trucker appointments would accompany the flat fee proposal to ensure truck traffic spreads out over 16 hours each day. Under the current arrangement, which disincentivizes peak calls, 42 percent of truck traffic moves during the day shift, when the fee is charged, and 58 percent at night, when the fee is waived, according to the study. Because terminals can only handle a certain number of moves each hour, appointments would be made on a first-come, first-served basis, thereby spreading the available slots throughout the day.

The study floated the concept of a portwide peel-off program in which containers consigned to particular BCOs, normally larger ones capable of aggregating a critical mass, are segregated into their own piles. When truckers serving a particular BCO arrive at the terminal, they proceed immediately to the designated pile and containers are peeled off from the top. This eliminates the need for each trucker to proceed deep into the terminal in search of a specific container.

Although BCOs and truckers said a portwide peel-off program could be cumbersome to manage, they encouraged individual terminals to have their own programs. LaBar said peel-off would be even more effective if the West Coast Marine Terminal Operators Association set a reduced fee, or no fee at all, to participate. Many larger BCOs today pay no traffic-mitigation fee because they keep their warehouse gates open all night and send most of their trucks to the terminals in the off-peak hours, he noted. Under a flat-fee arrangement, they would have no incentive to patronize the night gates, but they would continue to do so if they incurred little or no cost by participating in the peel-off program.

Nine of the 12 terminal operators have trucker appointment systems. Truckers would prefer a single portwide program with standard rules covering all terminals. The technology is available, they say, to enable a portwide trucker appointment program if all parties could agree on the particulars. As appointments become more sophisticated, LaBar said, predictive elements could be added to enable dual transactions for truckers and to help terminals and truckers manage the return of empty containers and loaded containers, which terminals still struggle handling at times.

Cushing said members of the terminal operators’ association will decide on a final model for the restructured off-peak program by late March or early April.