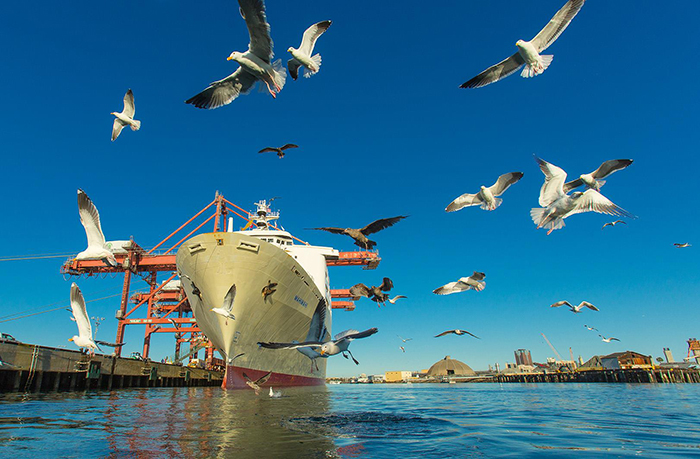 Ships at berth at the Port of Long Beach, such as the one pictured, are able to plug into shore-supplied power, which is known as cold-ironing, as part of the port's pollution reduction efforts.

The congestion that crippled West Coast ports in the first quarter of 2015 temporarily derailed the progress transportation providers and shippers had been making the past decade in reducing pollution at the Port of Long Beach.

However, the good news for beneficial cargo owners and port users is that in the long term, the second largest U.S. port is actually ahead of schedule in achieving its stretch goals for reducing harmful emissions from vessels, harbor craft, cargo-handling equipment, trucks and trains, and the process Long Beach is using is transparent to the port community.

The bad news, if BCOs and carriers need to be reminded, is that environmental progress costs money, so Southern California will continue to be an expensive gateway. Since most major BCOs and carriers have no choice but to call in Los Angeles-Long Beach if they are to be major players in the U.S. trades, they will most likely continue to pay the cost.

According to the port’s 2015 Air Emissions Inventory, congestion at marine terminals was the single biggest factor in Long Beach’s slight retraction in achieving environmental progress last year. The congestion, which was caused by coastwide labor issues, had a cascading impact on the entire supply chain. Vessels spent more time at anchorage and at berth, containers were handled multiple times and truck-idle times increased dramatically, with the result being an increase in harmful diesel emissions.

Over the long term, however, the environmental gains introduced under the Los Angeles-Long Beach Clean Air Action Plan of 2006 will ensure that ocean-going vessels, harbor craft, cargo-handling equipment, trucks and trains will emit fewer emissions even though cargo volumes are expected to continue increasing.

The Long Beach emissions inventory (Los Angeles each year also publishes its inventory) compares emissions to the baseline year of 2005, before the ports’ joint landmark Clean Air Action Plan was implemented. The Long Beach inventory found that total diesel particulate matter emissions in 2015 were 84 percent lower than in 2005. By comparison, 2014 emissions were 85 percent lower. Smog-forming nitrogen oxides and greenhouse gases were down 48 percent and 14 percent, respectively, in 2015 and 2005, compared with 50 percent and 21 percent in 2014.

Long Beach, like all West Coast ports, was gridlocked in the first quarter of 2015 owing to labor slowdowns and employer retaliation during the coastwide longshore contract negotiations. A tentative contract agreement was reached on Feb. 20, 2015, but it took several months for the ports to dig out from the congestion.

Long Beach’s 2015 report attributed the worst emission problems to the fact that dozens of container ships during the period of congestion were forced to wait at anchorage and operate vessel functions from their auxiliary engines. During normal times, most vessels proceed directly to berth. The engines are shut down and the vessels operate from clean shoreside electrical power. Also, there was more intra-terminal shifting of vessels in order to maximize berth utilization at the congested terminals.

The container yards were crammed with boxes beyond their capacity, requiring multiple handling of containers for delivery to truckers. These conditions resulted in additional use of cargo-handling equipment. Also, the cramped yard conditions caused excessive idling of trucks in queues outside the gates and within the terminals last year. The report stated that in 2015 compared with the previous year, truck on-terminal idling times were up 80 percent.

If it were not for the congestion, port-wide emissions would have been lower because of the various pollution-reduction programs implemented over the past decade under the CAAP, such as the clean-trucks plan that bars all pre-2007 model trucks, the Green Flag vessel speed reduction program, regulations requiring vessels at berth to operate from shoreside electrical power and the widespread use of cleaner fuels in the harbor.

Also, tugboats in Long Beach operate with newer engines, most cargo-handling equipment has been replaced with newer models, or retrofitted with cleaner engines, railroads operate newer locomotives, including ultra-low emission switching engines, and overall activities in the harbor are being streamlined through technology and automation.

The Long Beach emissions inventory was conducted by Starcrest Consulting Group and was reviewed by the U.S. Environmental Protection Agency, the California Air Resources Board and the South Coast Air Quality Management District.

Permalink Submitted by cristymesa@yahoo.com on Aug 30, 2016 8:29AM EDT
Federal, State and Local regulators must have a perception that trucking companies and drivers are rolling in the big bucks when in reality they're barely making livable salaries.

Permalink Submitted by cristymesa@yahoo.com on Aug 30, 2016 8:29AM EDT
Federal, State and Local regulators must have a perception that trucking companies and drivers are rolling in the big bucks when in reality they're barely making livable salaries.