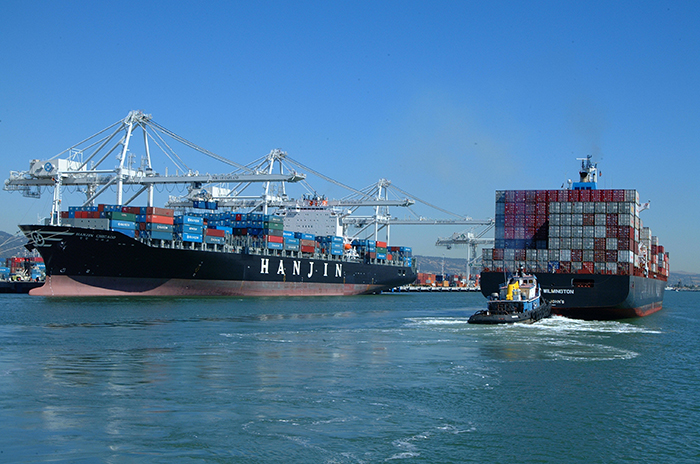 The backlog of empty Hanjin Shipping-leased containers in Southern California that has built up since the carrier declared bankruptcy on Aug. 31 will be reduced by two-thirds next week when Hanjin sends a vessel to Long Beach to pick up about 4,300 empties.

At the same time, the idled chassis upon which the containers were sitting will be released back into service. “The Port of Long Beach recognized the urgency to alleviate the shortage created by the estimated 6,000 Hanjin-leased containers sitting on chassis, which are needed throughout Southern California to move goods in and out of the region,” Lori Ann Guzman, president of the Board of Harbor Commissioners, said Thursday.

The fate of Hanjin-leased containers has proven to be a difficult problem for US ports. Hanjin agreed last month to accept the return of empty containers it owns, but would not accept leased containers because of concerns about who would pay the handling charges. The Port of Long Beach, Total Terminals International, which is 54 percent owned by Hanjin, and the ocean carrier worked together to secure an empty vessel to reposition the Hanjin-leased empty containers.

When the vessel arrives next week, TTI will load the ship at cost and the port authority will waive its fee for gaining access to the port’s terminal. “We feel this is a fair and necessary accommodation to keep goods moving through the ports in Southern California and to ensure our customers are able to remove their containers,” said Noel Hacegaba, Port of Long Beach chief commercial officer.

TTI will receive specific Hanjin-leased empty containers authorized by the leasing companies Triton, Textainer, Seacube, and Florens, the port stated. Delivery instructions can be found at www.ttilgb.com. About 1,000 of the empty containers expected to be removed are already located at the port and another 3,000 “will literally be taken off the street and shipped back to Asia,” Hacegaba said. That means some 4,300 idled chassis will soon be returned to service in Southern California during the peak shipping season, he said.