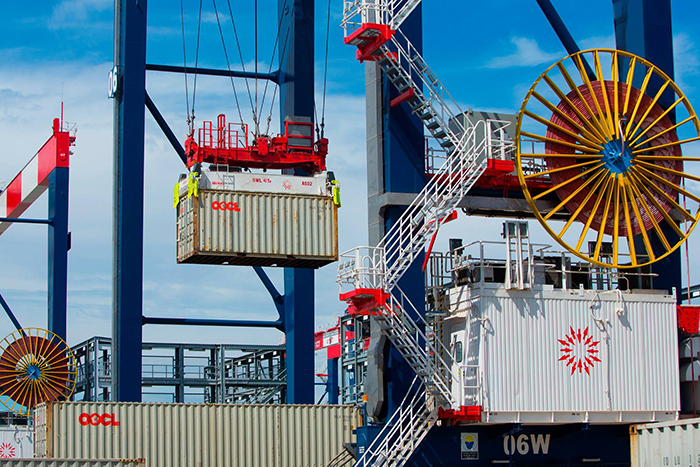 In possibly the strongest pitch yet for the benefits that marine terminal automation can deliver to truckers, the president of Long Beach Container Terminal said visit times at the newly automated facility are less than half the average truck visit time for the 13-terminal Los Angeles-Long Beach port complex as a whole.

Anthony Otto told a meeting of the California Trucking Association in Long Beach last week that the portion of the terminal that has been automated is producing average turn times, from arrival at the pedestal outside the entry gate to the exit gate, of 38 minutes to 40 minutes. By comparison, the truck mobility turn times published each month by the Harbor Trucking Association listed the average turn time in April as 85 minutes.

LBCT, which operates the Middle Harbor terminal in Long Beach, has been rolling out the first phase of its $1.3 billion automation project for the past two months. As of last week, automation of vessel, yard, gate and on-dock rail operations in the first portion of the 342-acre terminal to be upgraded has been completed. The entire automation project is scheduled for completion in 2019.

The key to the improved operations at Middle Harbor terminal is the repositioning of the container stacks from being parallel to the vessel, as in conventional U.S. terminals, to running perpendicular from the vessel to the gate. First of all, this allows the terminal operator to separate the yard tractors that service the vessels from the trucks that enter the facility from the street.

By separating vessel traffic from street traffic, Middle Harbor should not have to randomly close off sections of the terminal during periods of high traffic flow. During the West Coast labor problems from late 2014 to early 2015, one of the most frustrating and time-consuming experiences of truckers was that sections of marine terminals would be unexpectedly closed for hours due to port congestion. At Middle Harbor, “closed areas are completely eliminated. It’s extremely efficient,” Otto said.

Secondly, the repositioned container stacks in the yard extend from the vessel almost to the entry gate. When a truck enters the terminal, the driver backs the truck a short distance to the land side of the container stack, a process that takes about three minutes, Otto said.

Middle Harbor requires that truckers make appointments for picking up containers. Appointments help the terminal operator better manage the flow of traffic into and out of the facility, Otto said. Truckers on both coasts often complain that appointment windows are too narrow, given the vagaries of freeway traffic. The appointment window at Middle Harbor is 30 minutes, but the terminal tacks on an additional 45 minutes before the window and 45 minutes after the window, resulting in a total allowable time for arrival of two hours.

A huge advantage of the automated terminal is that it produces more opportunities for dual transactions than at conventional terminals. In a conventional terminal, containers are segregated in stacks according to inbound, outbound, empties, etc. Truckers usually drop off an export load in one pile and then proceed to another pile to pick up an import load.

At Middle Harbor, the computerized terminal operating system mixes different types of containers in a particular stack in order to enhance efficiency. Therefore, a driver can drop off an export load and pick up an import load from the same stack. “Dual transactions are a good thing, and here they are better than anywhere,” Otto said.

Don't forget about the best

Permalink Submitted by selam@nascent.com on Jun 1, 2016 9:01AM EDT
Don't forget about the best-in-class automated gating system that is letting trucks in and out of the facility in record times!
Port News›US Ports›Port of Long Beach
Port News›Port Productivity
Trucking Logistics›Drayage