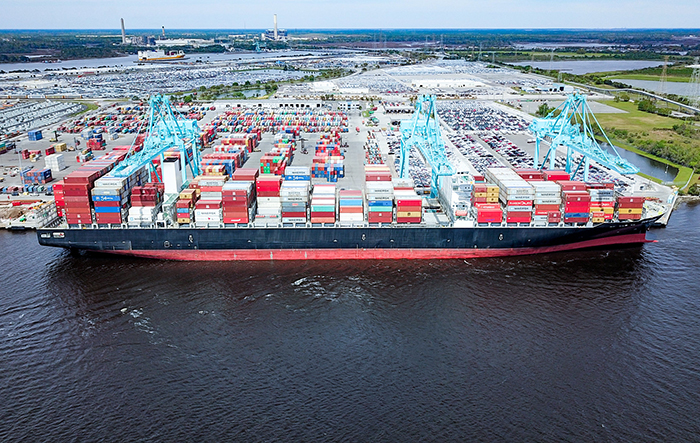 Jacksonville port officials are hopeful more large vessels such as ZIM Cape Sounio (above), an 11,000-TEU vessel, will visit the port with a deeper harbor and turning basin near Blount Island. Photo credit: Jacksonville Port Authority.

Correction: Due to an editing error, an earlier version of this report mistated the number of Asian services that call Jacksonville.

The Jacksonville Port Authority (Jaxport) said CMA CGM’s decision to relocate a weekly trans-Pacific service in May is a small and momentary step back in growing Asian volumes as it implements efforts — anchored by recently announced terminal expansions — to expand Caribbean, Latin American, and European business.

The loss of CMA CGM’s Pacific Express 3 (PEX3) brings Jacksonville’s weekly Asian services to four, but the port authority is confident in future Asian volume growth ahead. Asian imports though Jacksonville in 2018 rose 9.4 percent year over year to 198,009 TEU, accounting for roughly 56 percent of its total inbound volume, according to PIERS, a sister product of JOC.com within IHS Markit. Total Asian imports to the US East Coast climbed 9.3 percent to more than 5.3 million TEU last year.

Kristen DeMarco, chief commercial officer at Jaxport, said the port is encouraged by SSA Marine signing a 25-year lease that also includes an expansion of the Blount Island Marine Terminal to a total of 80 acres and a $28 million investment towards a harbor dredging project.

SSA’s infusion brings the total investment in the dredging project to $353.1 million, including $100 million in federal funding, $167.3 million from the state of Florida, and $57.7 million in port authority funds. The total price tag to deepen the port’s main harbor to 47 feet stands at $484 million, as of today, Apr. 2, 2019.

The port authority believes that in the long run, these positive steps will translate into more business from Asia, Europe, and the Americas. Jacksonville-based ocean carrier Crowley unveiled two liquefied natural gas vessels in March as part of its ambitious plans to increase volume with Puerto Rico, Honduras, Guatemala, Panama, and Costa Rica.

“Our ships are fast enough now that once we get to Puerto Rico, we can use that as a jumping off spot for the rest of the Caribbean,” said Steve Collar, Crowley senior vice president of logistics. “We can connect the cargo all the way down to Trinidad, the British Virgin Islands, wherever a customer wants to go in the Caribbean. Once we get it to San Juan, we can get it there quickly.”

In addition to Central America and the Carribean, the port believes organic growth will come from the west coast of South America.

Besides SSA building a larger container terminal, the dredging project is the critical cog in attracting new Asian business to Jacksonville.

Two of the three contracts for the project have been awarded, and work is under way. The Dutra Group is halfway complete and Great Lakes Dredging, which began work last November, is due to finish in late 2020, according to the port authority, which is also now saying the projected 2025 completion date could be pushed up to late 2023.

The port plans to deepen the 13-mile channel to 47 feet and is prioritizing the first 11 miles, right up to the Dames Point Bridge. The bridge is as prohibitive as the lack of water depth for the port to regularly handle more post-Panamax vessels. TraPac operates a terminal focused on Asian cargo on the other side of the bridge.

Jaxport and TraPac in 2017 were discussing the possiblity of moving the terminal to Blount Island. But a plan in which Trapac would operate a single terminal with SSA appears to have fallen apart. Jaxport said it is in talks with TraPac on next steps and that all options are being considered.

Even if a vessel calls on Blount Island, it has to sail under the bridge and turn around near the TraPac facility, the only container terminal west of the bridge, before heading back to SSA. The bridge is only 175 feet high, though, which creates problems similar to those faced by the Port of New York and New Jersey prior to the raising of the Bayonne Bridge from 151 feet to 215 feet.

The dredging project will include building a new turning basin close to Blount Island to allow vessels to call the SSA terminal without traveling under the bridge. The largest vessel so far to clear under the bridge had a capacity of 11,000 TEU, but Zim Integrated Shipping Services will send an 11,800-TEU ship to Jacksonville later this month. With a deeper harbor and new turning basin, DeMarco said the port will be able to handle calls from vessels as large as 13,000 TEU.

Jaxport sees potential in serving shippers not just in northern and central Florida but also farther into the interior. CSX Transportation and Norfolk Southern Railway offer three-day service to Chicago and two-day service to Atlanta, which involves a dray of up to 20 miles within Jacksonville.

After surpassing the halfway mark a year ago, the port of Savannah is set to complete its own $976 million deepening project, which will increase harbor depth from 42 feet to 47 feet, in early 2022. Savannah dwarfs Jacksonville in terms of trade with Asia, with 1.4 million TEU of imports from Asia in 2018 and 18 weekly trans-Pacific carrier services.

Permalink Submitted by gekalhagen@gmail.com on Apr 3, 2019 4:47PM EDT
P3's are always a sign of future opportunity when the risk is balanced and investments are mutual. The bridge issue will be one to watch as i believe the stated cost to raise the Bayonne bridge was $1.6 Billion Congratulations to both SSA and Jacksonville Port Authority on this opportunity.
Port News›US Ports›Port of Jacksonville
North America›United States
North America›United States›Florida