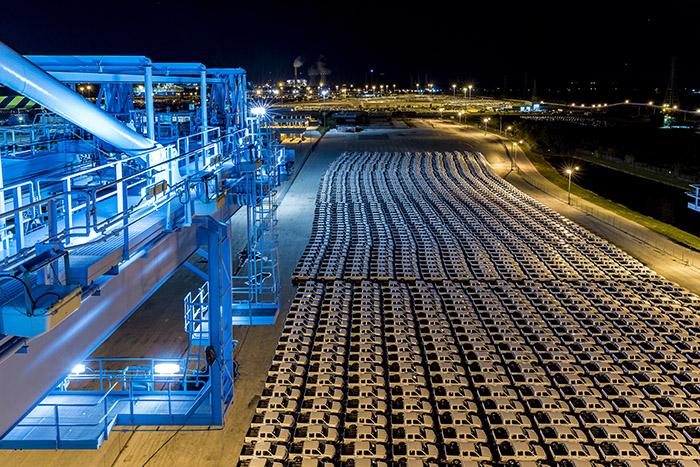 The Port of Jacksonville said it will develop a 100-acre automotive processing facility at its Dames Point Terminal, next to a container terminal whose current tenant plans to move to a site on a deeper channel being dredged farther down the St. Johns River.

The port said it is in negotiations with an unnamed potential operator for the new Dames Point auto terminal, which will be developed in phases over the next two to three years. The first phase is scheduled to open in late 2018.

Jacksonville’s vehicle-handling capacity now is centered at the Blount Island terminal. The port ranked second to Baltimore in US vehicle imports and exports in 2016, with 652,265 vehicles, according to Finished Vehicle Logistics. During Jacksonville’s 2017 fiscal year, which ended Sept. 30, the port handled 693,000 units.

The new Dames Point terminal will increase the port’s auto-processing capacity by 25 percent. It will have direct waterside access and be less than a mile from interstate highways 95 and 10, and has the potential for direct rail access, port officials said.

“The steady growth of our auto business speaks volumes about our efficiencies,” said Roy Schleicher, the port’s executive vice president and chief commercial officer. “We are committed to supporting our auto partners with the tools they require to continue to expand their businesses in Jacksonville.”

The new terminal will be adjacent to a container terminal that handles ships in the port’s Asian services. TraPac, the terminal operator, is slated eventually to move to Blount Island in order to be on a part of the river channel that is being deepened to 47 feet from the current 42 feet. The deepening project will not extend to Dames Point. No schedule has been set for the move.

Jacksonville’s planned development of the Dames Point auto terminal follows the Georgia Ports Authority’s recent announcement of an expansion in vehicle-handling capacity at the Port of Brunswick, about 60 miles north of Jacksonville. Brunswick was a close third to Jacksonville in Finished Vehicle Logistics’ latest annual rankings, with 631,713 units in 2016.

Georgia officials say the planned expansion at Brunswick will increase the port’s annual vehicle capacity to 1.4 million units from the current 800,000 units.