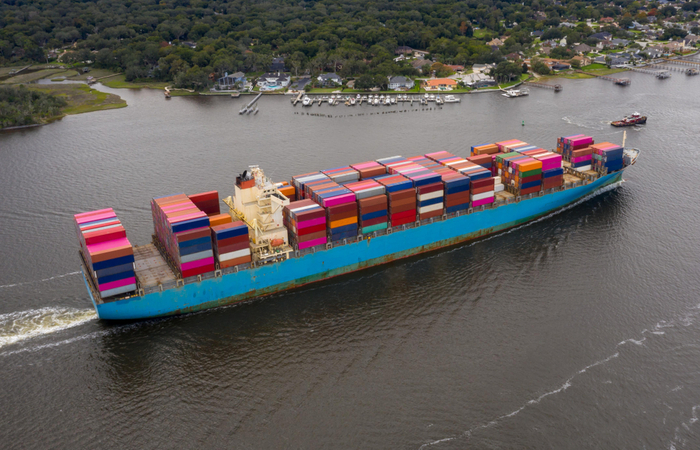 The project to dredge 11 miles of the Jacksonville Harbor will increase the depth to 47 feet in a stretch leading to the Blount Island Marine Terminal. Photo credit: Shutterstock.com.

The Port of Jacksonville has secured $93 million in federal funding to help pay for the $484 million project to deepen its harbor to handle post-Panamax vessels.

The US Army Corps of Engineers awarded $57.5 million to the project, which will deepen an 11-mile stretch of the harbor leading to the Blount Island Marine Terminal to 47 feet, in the 2020 allocation of its annual Army Corps Work plan, released Monday. That same day, President Donald Trump allocated the project $35.4 million as part of his 2021 budget proposal, according to Chelsea Kavanagh, spokesperson for the Jacksonville Port Authority (JAXPORT).

Kavanagh, in an email to JOC.com, said the two awards for Jacksonville Harbor, which complete the federal government’s commitment to the project, mean the port now has about $394 million for the work. That leaves it $90 million short for a project port officials hope will be finished by 2023.

JAXPORT CEO Eric Green, in a statement announcing the awards, said the port has never before received funds from the budget proposal of any president, adding the award “speaks volumes about the significance of this project to the Southeast US and the nation.”

The dredge project will enable the port to handle the 14,000 TEU vessels that can pass through the expanded Panama Canal. JAXPORT's limit at present is 13,000 TEU, although it has yet to handle a vessel beyond 12,000 TEU. The funding will help pay to dredge the first 11 miles of the project, which affects one of the port’s main container terminals, the SSA Marine Jacksonville Container Terminal in Blount Island. Another section is under evaluation, covering miles 11 to 13, which would affect the TraPac facility at the Dames Point Marine Terminal if completed.

The $93 million awarded Monday will pay for the third contract of the project, which involves dredging the harbor channel from mile eight to mile 11, thus extending to SSA Marine’s terminal at Blount Island, Kavanagh said. The Florida Department of Transportation awarded the project $35.3 million in September to help pay for the second contract, which entailed work from the third mile to the eighth mile.

Once completed, the project will give SSA terminal in Blount Island a vessel turning basin and the ability to handle two post-Panamax vessels simultaneously. Currently, large vessels have to go toward TraPac to turn and head back to Blount Island.

JAXPORT officials believe the dredging project is necessary to keep the port competitive with neighbors to the north — Savannah, Georgia, is currently dredging to 47 feet, while Charleston, South Carolina, is dredging to 52 feet.

Savannah received $34.6 million Tuesday for its dredge project from infrastructure funds announced by the US Department of Transportation (USDOT), and an additional $93.6 million from Trump’s fiscal year 2021 budget. The South Carolina Ports Authority will get $20 million from the USDOT for its berth improvements, the agency said Tuesday.

The commitments so far to the Jacksonville Harbor project include $193 million from the federal government, $116 million from the Florida Department of Transportation, and $58 million from JAXPORT. A public-private partnership contribution with SSA Atlantic will provide another $28 million.

JAXPORT also received $13.3 million Monday from the Army Corps for dredging and maintenance work unrelated to the channel deepening project.