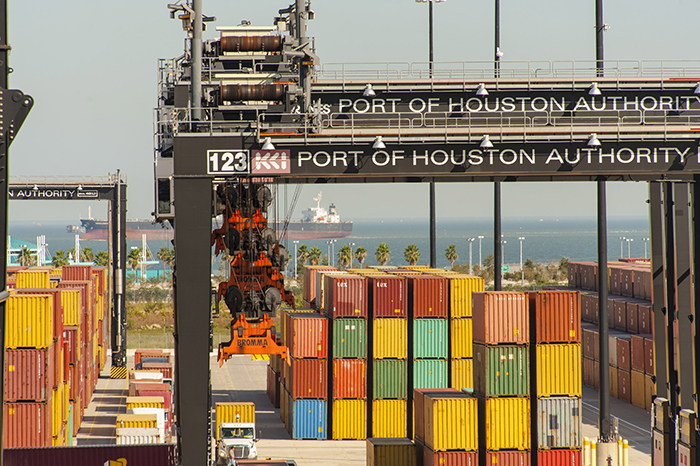 U.S. Gulf ports’ container traffic started strong in 2015, with more than a little help from slowdowns and congestion that hobbled West Coast ports and made shippers look for alternatives.

Houston’s first-quarter container volume jumped 11 percent to 433,030 20-foot-equivalent units of loaded imports and exports, as carriers added calls by extra vessels to deliver imports that couldn’t get through the gridlocked West Coast.

Gulf Coast container import volume during the first quarter rose an extraordinary 21 percent year-over-year, according to PIERS, a sister product of The Journal of Commerce within IHS Maritime & Trade.

Most of this increase was at Houston, which annually handles about two-thirds of containers moving through Gulf ports. Houston’s first-quarter imports soared nearly 30 percent year-over-year. New Orleans and Mobile posted 25 percent increases. The Gulf’s overall market share of U.S. containerized imports increased to 6.3 percent from 5.3 percent in the first quarter of 2014.

Much of the surge in diverted cargo is expected to return to normal West Coast routings now that the International Longshore and Warehouse Union contract has been ratified and cargo backlogs are clearing.

But Houston officials hope to retain some of that additional business, which would come atop what already is steady growth in volume. Last year, the port’s loaded-container volume rose 4.5 percent to nearly 1.6 million TEUs. Including empty boxes, the port handled 1.95 million TEUs.

Gulf ports’ share of U.S. containerized imports has risen steadily from 4.7 percent in 2010 to 5.4 percent last year, according to PIERS. Reasons include population growth in the region, strength in manufacturing sectors such as the automotive industry, and a desire among many cargo owners to diversify their port options to avoid being caught short as many were during the recent West Coast delays.

Houston plans more than $1 billion in capital spending during the next five years to expand facilities to prepare for increased import traffic and exports driven primarily by the region’s burgeoning petrochemical industry. Port officials expect a surge in exports of plastic resins and other petrochemical products when new plants in the area open during the next two to three years.

The port in May took delivery of four super-post-Panamax cranes for the Barbours Cut container terminal. Barbours Cut opened in the early 1970s, was built out in the 1990s, and now is undergoing a $700 million makeover that will result in a rebuilt terminal that will handle increased volume and larger ships.

The new electric-powered cranes are designed to lift and lower a loaded container at twice the speed of cranes currently in use at the terminal. The new cranes stand 289 feet high and have a lift height of 204 feet. They were installed on a new 1,300-foot berth strengthened to support the 1,505-ton cranes.

Other Barbours Cut improvements include rail projects and redevelopment of yard space to add container-stacking capacity.

A phased build-out continues at Houston’s Bayport terminal, which opened in 2007. About half of Bayport’s container-handling area has been developed. Current work includes extension of the current 3,300-foot quay to 4,000 feet and the addition of 25 acres and three cranes to the nine super-post-Panamax cranes already in operation.

Work is winding down on dredging the 40-foot Bayport and Barbours Cut channels to 45 feet to match the depth on the Houston Ship Channel, and widening them to accommodate larger vessels. To avoid waiting several years for federal appropriations, the port advanced $80 million of its own funds for the project.

New Orleans benefited from higher volume by carriers led by Mediterranean Shipping Co. and Hapag-Lloyd, and from Chiquita banana imports that until recently moved through nearby Gulfport, Mississippi.

Chiquita moved its mid-Gulf operations to New Orleans after signing a vessel-sharing agreement with MSC. The move is expected to add 60,000 to 78,000 TEUs a year to New Orleans’ volume, which would amount to a 15 percent increase in the port’s total container traffic.

New Orleans is building an intermodal rail terminal next to the port’s Napoleon Avenue Container Terminal. The $21 million project will provide a 10,000-foot track and five acres of heavy-duty paving. Completion is scheduled for next February.

Chiquita’s departure from Gulfport caused the Mississippi port’s first-quarter container volume to dip 10 percent to 87,420 TEUs. Chiquita had been the port’s largest customer since shifting from New Orleans in the early 1970s, when the company was known as United Brands.

Gulfport recently signed a 30-year contract extension with Dole Fresh Fruit, another longtime banana importer, and has been seeking new business to offset the loss of Chiquita.

The port is in the midst of a major expansion on 84 reclaimed acres after being devastated by Hurricane Katrina a decade ago. The expansion includes rebuilding of wharves, development of a loop track for more efficient rail service, expanding facilities for trucks and cargo, and a $32 million investment in three post-Panamax container cranes capable of spanning 18 rows of containers.

The port’s channel has been restored to its authorized 36-foot depth after silting in to 32 feet. An Army Corps of Engineers study is expected to be completed this year on the environmental impact of deepening the channel to as much as 47 feet, a job that would require a multiyear process of congressional authorization and funding.

First-quarter volume edged up 2 percent year-over-year at the Port of Mobile. The port is working toward the next phase of expansion of its container terminal, which opened in 2008 and is operated by APM Terminals. The Alabama State Port Authority paid $25 million to acquire a 35-acre dockside tract for future expansion of the terminal and a 63-acre industrial site a half-mile from the harbor

The 35-acre site fronts the port’s 45-foot-deep shipping channel and will be set aside for future expansion of the container terminal. The site had been used for coal storage. The port’s existing container terminal covers 90 acres. Site preparation is under way for expansion onto 45 adjacent acres on the opposite side of the terminal from the newly acquired property.

The expansion will increase the terminal’s annual throughput capacity to 1 million TEUs. The off-dock site will be used for warehousing, distribution and light manufacturing. The site is next to an intermodal container transfer facility that is under construction and scheduled to open by the end of this year.