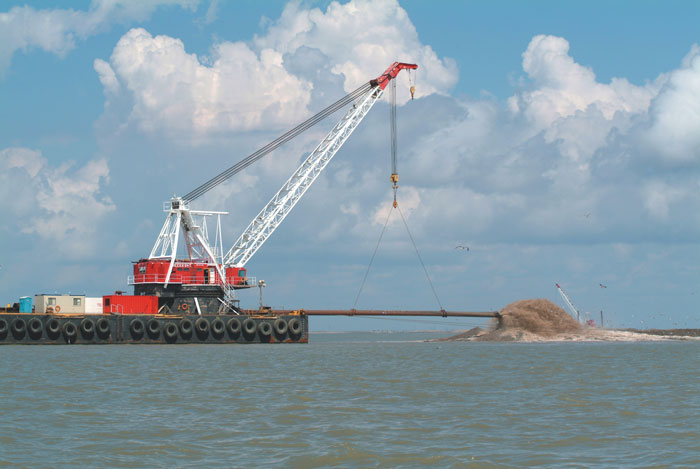 As the Panama Canal marks its centennial this year, the Port of Houston is celebrating the 100th anniversary of the opening of the Houston Ship Channel.

And with an eye toward the 2016 expansion of the Panama Canal, Houston and other Gulf of Mexico ports are investing to expand their capacity to handle the larger ships that will transit the canal’s new locks.

At Houston, work is expected to be completed this year to deepen the 40-foot channel to the Barbours Cut container terminal to match the 45-foot depth of the Houston Ship Channel. The channel to the port’s Bayport terminal will undergo similar deepening scheduled for completion next summer.

The dredging projects are part of the $283 million the Port of Houston Authority has earmarked in capital spending this year for continuing development at Bayport and modernization at the older Barbours Cut terminal.

The port has completed a 1,300-foot wharf at Barbours Cut and has ordered super-post-Panamax cranes set to arrive during the first quarter of 2015. Other Barbours Cut improvements include rail projects and redevelopment of yard space to add container-stacking capacity.

Bayport is being built out in phases. Current work includes extension of the current 3,300-foot quay to 4,000 feet and the addition of 25 acres and three cranes.

Houston port officials expect little difficulty attracting cargo to support the expanded terminals. The fourth-largest U.S. city sits amid the nation’s largest petrochemical complex, which is undergoing rapid expansion unleashed by the shale energy boom. Much of the production of new and expanded petrochemical plants in the region will be exported in containers.

The port’s capital spending this year also includes $26 million for concrete repair, wharf rehabilitation and other projects at the port’s general cargo and bulk terminals in the Turning Basin area on the Houston Ship Channel. Those docks handle much of the port’s steel and other breakbulk cargoes.

Other Texas ports also are expanding. Port Freeport, about 45 miles southwest of Houston, this year took delivery of two post-Panamax cranes and began work on a locally funded widening of a channel bend that currently restricts ships to 820-foot maximum length. After the work is done, the 45-foot channel will handle Panamax ships of up to 965 feet.

To the east at New Orleans, the port is building an intermodal rail terminal next to the Napoleon Avenue Container Terminal. The $21 million project will provide a 10,000-foot track and five acres of heavy-duty paving. Completion is scheduled for February 2016.

New Orleans scored a coup this year when Chiquita announced it would shift its banana imports to the port from nearby Gulfport, Mississippi, when the company enters a vessel-sharing agreement with Mediterranean Shipping Co. The move next year is expected to add 60,000 to 78,000 TEUs a year to New Orleans’ volume, which would amount to a 15 percent increase in the port’s total container traffic.

The announcement was a blow to Gulfport, where Chiquita represents 30 percent of the port’s volume. Chiquita had been the port’s largest customer since shifting from New Orleans in the early 1970s, when the company was known as United Brands.

Gulfport is in the midst of a major expansion after being devastated nine years ago by Hurricane Katrina’s 24-foot storm surge. A controversial plan to raise the port by 15 feet has been scrapped, but development is proceeding on 84 reclaimed acres.

The port’s expansion includes rebuilding of wharves, development of a loop track for more efficient rail service port, and expanding facilities for trucks and cargo. The port plans to spend $32 million on three post-Panamax container cranes capable of spanning 18 rows of containers.

Dredging began this year to restore Gulfport’s channel, which had silted in to 32 feet, to its authorized 36-foot depth. Daniels said the Army Corps of Engineers is expected next year to complete an environmental impact study of deepening the channel to between 36 and 47 feet. The work, however, still would require congressional authorization and funding, a process that typically takes years.

Meanwhile, Gulfport is pursuing other business. Days after Chiquita’s announcement, port officials approved a lease with McDermott Inc. for a dockside pipe fabrication plant that will begin operations in the first quarter of 2016 and employ about 100 workers.

“While we are losing Chiquita, and that’s certainly difficult, the number of jobs created by just the pipe production will be significantly higher than the ones we’ve lost,” said Jonathan Daniels, executive director of the Mississippi State Port Authority.