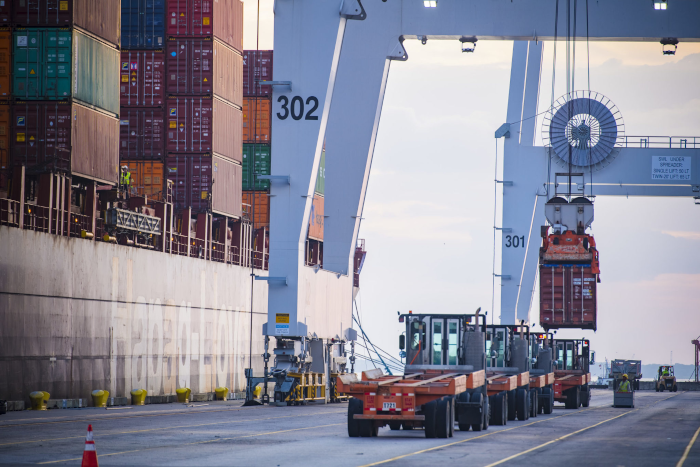 The ports of Houston (pictured), Mobile, and New Orleans handled close to 90 percent of cargo that passed through the Gulf Coast in 2019. Photo credit: Port of Houston Authority.

After cargo volumes through US Gulf Coast ports grew at the fastest pace in four years in 2019, the ports must now deal with the challenge of maintaining growth in the face of headwinds from the coronavirus disease 2019 (COVID-19).

Container volumes through the Gulf Coast increased 12 percent to 3.65 million loaded TEU in 2019, according to data from PIERS, a sister company of JOC.com within IHS Markit. That outpaced both the East Coast, where port volumes grew 2 percent compared with 2018, and the West Coast, where throughput fell 1.9 percent.

The growth was fueled by the rising number of Asian services coming into the Gulf Coast and an increase in exports from the extensive resin manufacturing sector in the region. This year, however, ports across the US have seen downward pressure on cargo volumes as blank sailings by ocean carriers have been followed by a drop off in consumer demand as the country has gone into lockdown to fight the coronavirus, which also is expected to reduce cargo volumes.

If that wasn’t enough, IHS Markit expects US resin exports to fall about 9 percent in 2020 as a result of the recent collapse in oil prices triggered by a coronavirus-related drop in demand that was exacerbated by a since-resolved production dispute between Russia and Saudi Arabia. US resins are made with low-cost shale gas produced in the Gulf region, and the recent drop in oil prices has brought down the cost of foreign-made resins made by offshore producers whose production method uses oil instead of gas.

Officials at the Port of Houston Authority (POHA) say they are cautiously optimistic that the port’s reputation for efficiency and its diverse portfolio of ocean carriers' services will enable it to continue to grow cargo volumes despite those demand headwinds.

That optimism was bolstered by Port of Houston volumes that grew 11 percent year over year to 773,087 TEU in the first quarter of 2020, despite an 11 percent decline in March, according to POHA. The port experienced seven blank sailings on Asian services in March, and is expecting at least two in April or May. By comparison, Global Port Tracker, which is published monthly by the National Retail Federation (NRF) and Hackett Associates, projects total US imports in the first half of 2020 will decline 15.1 percent from the same period last year.

As in previous years, the ports of Houston, New Orleans, and Mobile handled close to 90 percent of the total volume moving through the Gulf Coast in 2019, and all three saw total volumes grow at a faster clip in 2019 than in the previous year. Houston and Mobile are on the route of a new Asia service introduced by the 2M Alliance in August that linked the cost to Xiamen, Yantian, and Busan via the Panama Canal.

Cargo throughput in Houston grew 11.1 percent to 2.48 million loaded TEU in 2019, slightly faster than 10.2 percent year-over-year volume growth seen in 2018. Exports, up 18.9 percent, drove the increase, but imports through the port increased 4.4 percent as well.

Despite Houston’s steady growth, its share of the Gulf Coast market dipped slightly to 67.89 percent in 2019 from 68.3 percent the year before. That drop stemmed in part from gains at the Port of Mobile, which saw its market share increase to 9.33 percent from 8.3 percent in 2018.

The volume of cargo handled by Mobile surged 25.9 percent in 2019 to 340,279 loaded TEU, following a 7.5 percent jump in 2018, according to PIERS. Imports through the port increased 43.2 percent, while exports were up 6.1 percent. That echoes the split in New Orleans, where imports grew at twice the rate of exports in 2019, but is the opposite of Houston, where exports grew far more rapidly than imports.

The growth stemmed from a combination of factors, including an increase in shipment of consumer goods through the port, said Judith Adams, spokesperson for Alabama State Port Authority. In addition, services from Asia and Europe increased their slot allocation for shippers moving goods through Mobile, and Asian services increasing vessel sizes, she said.

Although Mobile experienced seven blank sailings in March, the port volumes were about the same as in March 2019, and port officials don’t anticipate a downturn in 2020, Adams said. “As we get back to some level of normalcy in the Asia trades, we think we’ll finish the year out with gains,” she said.

Cargo volume through New Orleans increased 7.5 percent to 436,897 loaded TEU last year compared with 2018, driven in part by the addition of a call in New Orleans to a 2M Alliance weekly service linking China, Hong Kong, South Korea, and Singapore, said Jessica Ragusa, spokesperson for the Port of New Orleans. That compared with a 4.4 percent increase in total cargo in 2018, PIERS figures show. Even as cargo growth accelerated, however, the port’s share of the Gulf Coast market slipped from 12.5 percent in 2018 to 12 percent.

“On the import side, we saw some big increases in coffee and other agricultural imports as well as food-grade import petrochemicals,” Ragusa said.

As the three busiest ports on the Gulf Coast increased cargo volumes and their combined market share, the three carriers with the largest share of the coastal volumes also consolidated their position.

Maersk Line handled the most cargo to and from the Gulf Coast, although its 12.9 percent increase in volume to 812,208 loaded TEU still left its market share essentially flat — 22.3 percent versus 22.1 percent in 2018 — because other carriers saw larger volume gains, PIERS data showed.

CMA CGM/APL saw the most cargo growth among the top carriers in the trade, increasing its total volume through Gulf Coast ports 22.7 percent to 611,955 loaded TEU for the year and increasing its market share from 15.3 percent to 16.8 percent in the process.

An 18.2 percent jump in volumes, to 774,711 loaded TEU, also drove an increase in Gulf Coast market share for Mediterranean Shipping Co., which saw its share of the market tick up from 20.1 percent to 21.2 percent, the figures show.

Global Shipping Outlook: A Sneak Peek at 2021
Port Performance North America: Managing Cargo Flow During a Pandemic — and Beyond
END_OF_DOCUMENT_TOKEN_TO_BE_REPLACED