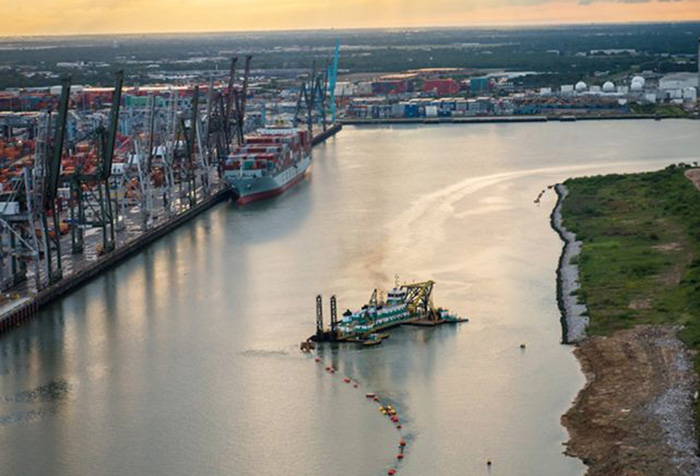 The completion of dredging work will make it easier to export plastic resins through Houston.

Port Houston has completed a channel-deepening project that will allow heavier loading of ships with containers of heavy cargoes such as synthetic resins.

Executive director Roger Guenther said dredging of the port’s Bayport terminal had been completed, and that the US Army Corps of Engineers will maintain the channel to a depth of 48.5 feet, which will allow vessel drafts of 45 feet.

The channel to the port’s Barbours Cut terminal already has been deepened to match the 45-foot vessel drafts permitted on the Houston Ship Channel. Deeper channels effectively increase the number of heavy containers that can be stowed aboard a ship — an increasingly important consideration for cargoes such as resins.

Houston is at the center of a petrochemical manufacturing boom created by low-cost natural gas feedstocks. Annual US exports of synthetic resins are expected to rise by 500,000 or more TEU within the next few years.

Port Houston hopes to maintain or expand its current 45 percent share of US polyethylene and polypropylene resin exports but will need additional vessel capacity that the 45-foot channel drafts will provide. Volumes of such resin exports have fallen 31.4 percent year-over-year in the first four months of the year, according to data from PIERS, a sister division of JOC.com within IHS Markit. Resins made up 4.4 percent of Houston’s export volumes in the same period.

The port is in the midst of a $1 billion expansion and renovation program at Barbours Cut and Bayport, which together handle two-thirds of US Gulf container volume.

Guenther said Barbours Cut recently handled 4,198 container lifts on a single call, a record for the port, on a call by the Cosco Boston, which operates in one of the port’s three weekly Panama Canal services from Asia. The port’s previous record for lifts on a single vessel at the port was 4,153 on the Maersk Atlanta at Bayport in March.

Houston has posted sharp increases in container volume this year following the addition in 2016 of two all-water Asian services by the 2M Alliance of Maersk Line and Mediterranean Shipping Co., and by Cosco China Shipping.

Including empty boxes, January-through-May volume was 1,023,159 TEU, up 14.6 percent from a year earlier, according to Port Houston statistics.