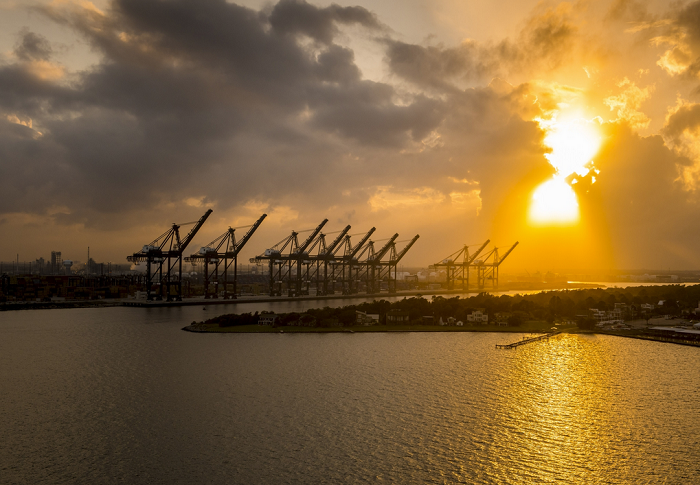 With the long-awaited boom in US production of synthetic resins expected to finally materialize this year, shippers are urging carriers to add more services from the Gulf to Asia. But will ocean carriers respond? (Above: the Port of Houston.) Photo credit: Port of Houston.


Asia has become the main driver of the US Gulf’s container shipping growth during the last decade, with volume jumping more than 25 percent last year. The big question: How much more can the market grow?

Ships on the three Asia-to-Gulf container services via the Panama Canal are running near capacity. Importers have diversified their port gateways by using Gulf ports in supply chains to serve the region’s growing population. Exports, already strong, are being boosted by growth in shipments of synthetic resins.

With the long-awaited boom in US production of synthetic resins expected to finally materialize this year, shippers are urging carriers to add more services from the Gulf, where the resin production is centered, to Asia, where much of the exports are destined.

Carriers are willing but cautious. They note that resins are a backhaul commodity that provides container lines with lower rates than most import containers, which are primarily filled with consumer goods. Export commodities such as resins also tend to be heavier than imports, which means fewer containers can be stowed aboard an outbound vessel.

Shippers also have questioned the availability of empty containers for resin exports. Operators of the Gulf’s existing Asian container services note that they also have multiple Gulf services. Carriers say these services can be used to reposition empty boxes to the Gulf — if they can generate enough revenue for a profitable round trip.

“We have to do the math, and the math has to make sense,” Howard Finkel, executive vice president and chief operating officer at Cosco Container Lines America, said at a recent Port Houston symposium on resin exports.

Shippers and ports say rising import volumes from Asia support demand for more or higher-capacity Gulf services. The Gulf Coast’s share of containerized imports from Asia rose to 6.6 percent from 5.87 percent in 2016 and 4.7 percent in 2005, when Houston landed its first all-water container service from Asia.

Houston, which handles more than two-thirds of the Gulf’s container volume, had a 53-to-47 ratio of loaded import TEU to loaded exports last year. This ratio, a reversal of historic patterns, reflected a 20 percent year-over-year increase in Houston’s total imports in 2017.

Imports were up 17.4 percent last year at the Port of Mobile, mainly because of two new Asian calls that began in mid-2016. Mobile’s Asian imports will rise further with Wal-Mart’s opening of a 2.6-million-square-foot distribution center near the port this year.

In 2005, Wal-Mart’s opening of a similar distribution center at Houston induced CMA CGM to launch the first, all-water Panama Canal service from Asia to the Gulf. Other retailers followed Wal-Mart in setting up import DCs in the Houston area, leading Cosco Shipping and the 2M alliance of Maersk Line and Mediterranean Shipping Co. to add Panama Canal services to Houston and Mobile in 2016.

CMA CGM upped the ante on its all-water Asian service to the Gulf last year when it replaced the Panamax vessels in its PEX-3 eastbound round-the-world service with post-Panamax ships of about 6,000-TEU capacity. The French carrier also added a New Orleans call on the service, on which Cosco shares capacity through the Ocean Alliance.

Except for the PEX-3, and for trans-Atlantic services that use 6,500-TEU vessels, container ships that regularly call at Gulf ports are still Panamax or smaller, although Houston last year handled nearly 20 “extra loaders” with capacities of up to 8,500 TEU.

Although the impact of the Panama Canal’s 2015 expansion on Gulf container trade has been muted, ports in the region have factored the expanded canal’s wider locks into their long-term plans. Several ports, including Houston, New Orleans, Mobile, Freeport, Gulfport, and Port Tampa Bay, have installed or are planning to purchase post-Panamax cranes, and are in various stages of approval or financing of deeper or wider channels.

But while Asian services through the canal represent the fastest-growing Gulf market sector, most of the region’s container volume still comes from more traditional routes to and from Latin America, North Europe, and the Mediterranean.

Gulf exports to Northeast Asia rose 20.5 percent year over year through November to 201,458 TEU — a 34,225-TEU gain that represented the largest volume increase of any export trade. Exports to Southeast Asia jumped 33.9 percent, to 61,314 TEU.

Import-export volume in most other trades, including South and Central America, was relatively flat, a reflection of economic trends and the nature of the trade, which includes several services that specialize in imports of bananas and other fruits that show little year-to-year fluctuation.

However, these niche trades remain busy, with new services and port calls added during the last two years by carriers including CMA CGM, Seaboard Marine, SeaLand, Linea Peninsular, and World Direct Shipping, which this month added a call at the Port of Pensacola, Florida, to an existing service between Port Manatee, Florida, and Coatzacoalcos, Mexico.

There will be larger vessels

Permalink Submitted by ferrullig@minds... on Feb 12, 2018 12:03PM EST
There will be larger vessels cascaded down, as CMA has recently done with nearly 6000 teu ships for the service via the Suez, with a call in New Orleans. As the Amazon and Wal Mart warehouses are opened in Mobile, that will get larger ships for the Houston then Mobile calls but Amazon and Wal Mart will have over 1000 teus a call on them, so not available at Houston. The vessel capacity relates to Houston and the Gulf is governed by imports, not exports. You can't justify a service based on $700. export loads, stated pretty empahatically

To finish above - stated

Permalink Submitted by ferrullig@minds... on Feb 12, 2018 12:09PM EST
To finish above - stated emphatically by Howard Finkel of Cosco at the Petrochemical Conference in December 2016. If the shippers are willing to return to the $1600-1800. they were paying three years ago, that would get the carriers attention and likely more capacity and equipment. That is unless the carriers are willing to continue to subsidize US exports to large degree - which for the most part is what they've done for decades.