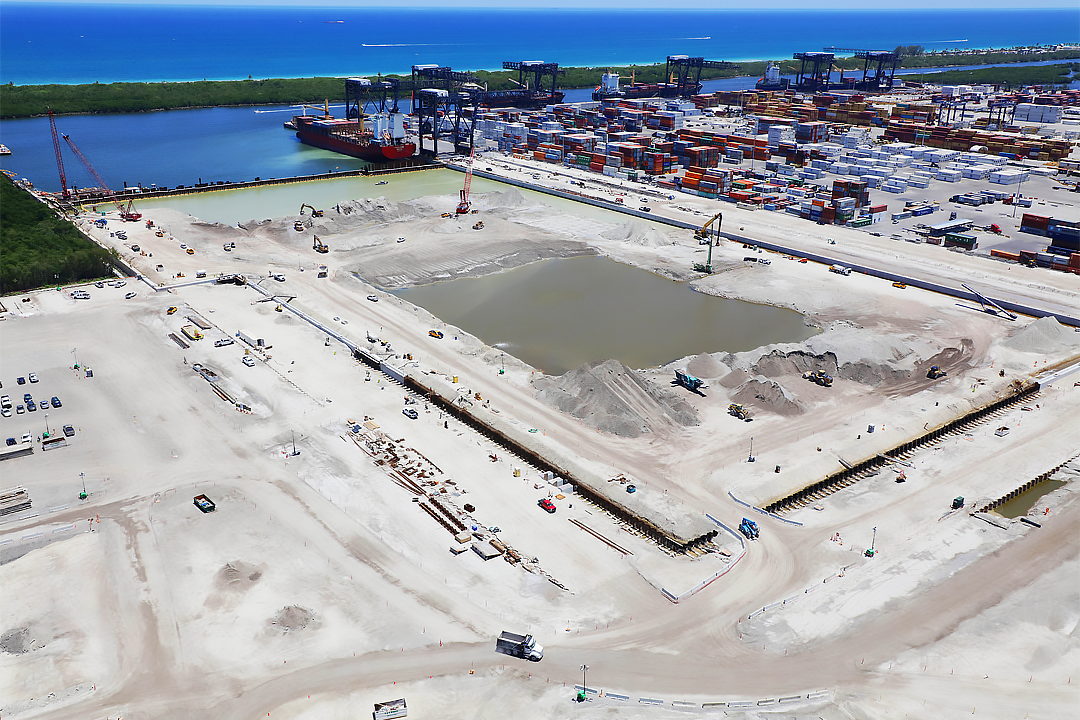 Port Everglades has embarked on a number of projects to be capable of handling 8,000 to 10,000 TEU vessels more regularly on the Latin American and European trade lanes. Photo credit: Port Everglades.

Port Everglades says it needs additional federal and state funding for infrastructure improvements so it can handle the larger vessels north-south carriers are plying on the trade lanes the port depends on.

The US Army Corp of Engineers in February awarded $29.1 million toward the construction of a new facility at the US Coast Guard Station at Everglades, which is part of a $437 million project to widen the inner harbor and dredge to 48 feet, which could be completed by 2026. But President Donald Trump did not include Port Everglades in his fiscal year 2021 budget, so the port authority will once again lobby the Corps to fund the $235 million federal share.

“Historically what we've been told is that once there's an initial investment in a project, the likelihood of getting additional funding is much higher,” Glenn Wiltshire, interim CEO of Port Everglades, told JOC.com.

Wiltshire assumed the interim role in March 2019 after the death of Steven Cernak. Jonathan Daniels will take over Wiltshire’s duties overseeing these upgrades after being named new CEO on May 20. Daniels has been the executive director of Gulfport, Mississippi, since 2013.

Daniels primary job will be to grow trade, which requires Port Everglades to remove the impediments blocking the handling of full vessels, multiple vessels, and two-way traffic in the channel. The necessary improvements include longer berth space and wider turning basins and channels.

Those upgrades are critically important for the 8,000 to 10,000 TEU vessels ocean carriers would like to send into Everglades on their European routes. The average vessel size calling the port now is only 4,500 TEU, due in part to the infrastructure limitations, the Port Everglades Authority said. Most of the European vessels are just under 1,000 feet long, with a beam of 130 to 140 feet. They have to come in lightly loaded given the 42-foot inner channel depth and because the ship-to-shore cranes cannot lift heavy containers or boxes stacked too far out on the larger vessels.

Terminal operators ask larger vessels to anchor outside the harbor when there is a cruise ship present because there isn’t enough space to navigate the two side-by-side.

“Those larger ships are well aware of these restrictions, but it adds a complication and adds a cost,” Wiltshire said. “So we want to remove those impediments.”

The attempt to win additional funding for these infrastructure projects comes at a difficult time for the port. First quarter laden volume was down 3 percent year over year, according to PIERS, a sister product of JOC.com within IHS Markit. The port authority hasn’t released April numbers, but port officials expect a double-digit decline.

Volume in 2019 dropped nearly 12 percent year over year, reaching a four-year low with 724,208 laden TEU, according to PIERS.

Everglades’ first quarter is in line with other US Southeast and mid-Atlantic ports struggling through the COVID-19 pandemic and resultant recession.

Charleston was the only port with growth in the first quarter, up just 0.6 percent versus the same quarter a year ago, according to PIERS. Volume fell 5.5 percent in Savannah, 5.1 percent in Virginia, 9.9 percent in Jacksonville, and 2.2 percent in Miami.

Port authorities are closely examining their expenditures and cutting costs to survive the turbulent US economy. Nevertheless, Port Everglades wants the infusion of federal and state dollars to continue.

Evergreen Marine Corp. last month launched a transshipment route through Port Everglades, with stops in Mexico and Panama. The two countries accounted for a combined 35,000 TEU in 2019, or about 5 percent of the port’s annual volume, according to PIERS. That followed Sealand Marine launching the Hispaniola service in July 2019 connecting to the Dominican Republic and Haiti, and Crowley Maritime starting a similar service in May 2018.

These new services, however, are on the north-south Latin American routes, which can handle less than 2,000 TEU in some cases. The larger vessels are coming from Europe. Germany is Everglades’ top European trading partner, representing approximately 18,000 TEU, or 2.5 percent of its volume in 2019.

“Ultimately our goal is to handle larger ships in the east-west trade, Europe to here. It’s what we mainly get from CMA CGM, Hamburg Sud, Hapag-Lloyd, Maersk, and Zim,” Wiltshire said.

Relocating the US Coast Guard station is the critical first step to handling larger vessels on the inner channel. Currently, when a large cruise ship is docked in Port Everglades, a vessel in the 8,000 to 10,000 TEU range cannot enter or exit the port because of the location of the existing station. Demolishing the current building will allow the port to add 250 feet of width when complete in 2023, a necessary first step to deepen the harbor from 42 to 48 feet at mean low tide.

The landside also needs to be improved through capital investments. Wiltshire said there must be more berth space to handle larger vessels or fit multiple smaller vessels simultaneously.

Berths 31 and 32 are a combined 2,000 feet and can handle Maersk, Mediterranean Shipping Co., or ZIM Container Line vessels. Berth 30 is only 900 feet long, however, not long enough for Florida International Terminals to handle Hamburg Sud, Hapag-Lloyd, and CMA CGM vessels in the 8,000- to 10,000-TEU range.

It causes a difficult juggling act of berth assignments when one of these vessels arrives.

“By lengthening Berth 30, we could handle a larger vessel that is 1,000 feet long, and also two 600- foot vessels at once, which we can’t do today,” Wiltshire said.

Port Everglades currently has seven cranes, two in Berth 30 and five between Berths 31, 32, and 33a. The port authority has three cranes on order from ZPMC. These Chinese-made ship-to-shore cranes will be placed in Berth 31 before the end of this year. If Port Everglades exercises an option to buy three more, they would be placed on Berth 30.

Wiltshire said the cranes are necessary because the current equipment cannot reach wide or high enough on the 8,000 to 10,000 TEU vessels to grab all the containers.

“If the ship is carrying 18 or 19 containers wide, they cannot have boxes stowed on the last three tiers or else we can’t reach them without maneuvering the vessel. Our current cranes are also only 151 feet, so they can only reach 1 over 6, meaning we can lift one box only if the containers are stacked up to six high,” Wiltshire said.

The three cranes that were ordered would be able to lift one box over a stack eight boxes high and go 22 containers wide, eliminating virtually all the restrictions on the vessels regularly visiting Everglades.