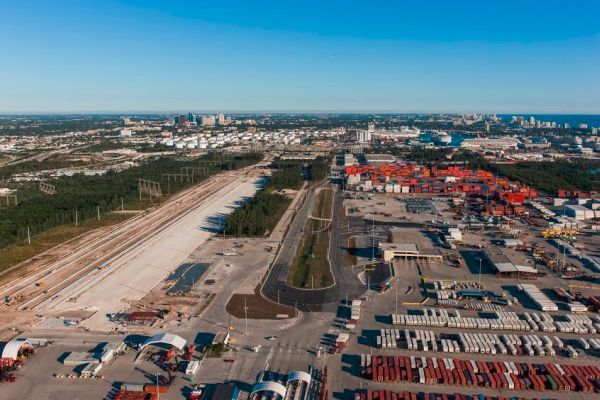 Port Everglades’ new intermodal transfer facility is up and running, and officials are hoping it will keep the Florida port competitive with other destinations in the Southeast.

Florida East Coast Railways’ Intermodal Container Transfer Facility opened yesterday with a ribbon-cutting ceremony and tours for the public. The $72 million project was a public-private partnership between Broward County, the state of Florida and FEC. County Mayor Barbara Sharief called the facility an “important link” to the port’s future.

With FEC’s connections to Class I railroads CSX and Norfolk Southern, rail service to 70 percent of the U.S. population can be completed within four days, the railroad said.

“The [intermodal facility] ensures that Port Everglades remains competitive with other U.S. East Coast gateways and, most importantly, it will give our port a cost and time-to-market advantage over many of these gateways, thereby putting more and more South Florida residents to work as a result of the additional business opportunities it will generate,” said Port Everglades Director Steve Cernak in a press release.

Broward County’s board of commissioners purchased the land for this facility 17 years ago. The 43-acre intermodal hub increases FEC’s annual capacity from 100,000 lifts to 450,000 lifts, and the state is also hoping it will decrease congestion on the area’s roads as well. Before this week, containers were drayed to off-port rail terminals.

“The new ICTF is a huge win for the port,” said Florida Department of Transportation Assistant Secretary Richard Biter. “The project will enhance the port's competitiveness and will provide savings on a per container basis by shifting cargo from truck to rail.”

FEC said the new facility will allow the company to build 9,000-foot unit trains within the facility without blocking any city streets, and will allow cargo to move through Port Everglades to Atlanta and Charlotte, North Carolina, in two days. Nashville and Memphis, Tennessee, can be reached in three days.

The following video from Port Everglades shows a glimpse of the ribbon-cutting ceremony:

Earlier this year, the Florida legislature approved $576,000 for project preconstruction engineering and design for a future expansion project at Port Everglades. The state’s five-year port plan shows the port adding up to five new berths that will be able to accommodate larger vessels. The port was allocated $589 million in the plan, money that would also cover an expansion to Terminal 4, along with the installation of cranes to help unload post-Panamax ships.