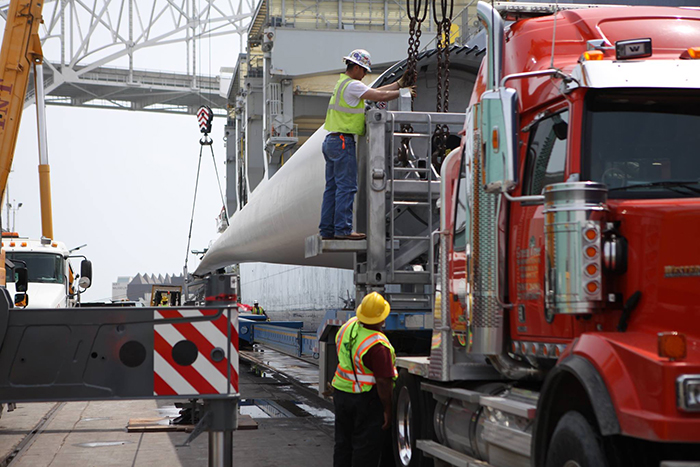 Under LaRue, the Corpus Christi port was transformed into one that focuses on shippers of energy-related bulk, breakbulk, and project cargoes. Photo credit: Shutterstock.

Sean Strawbridge will become CEO of the Port of Corpus Christi, Texas, on Jan. 1, succeeding John LaRue, who refocused the port into a specialist handler of wind power components and other energy cargoes.

Strawbridge, the port’s chief operating officer since 2016, is a former managing director of operations and trade development at the Port of Long Beach. LaRue, who has headed the Corpus Christi port for 23 years, will stay on as an adviser until he retires in June 2019.

Under LaRue, the port refocused its efforts on shippers of energy-related bulk, breakbulk, and project cargoes instead of containers and developed niches in sectors such as wind energy. Corpus Christi expects to handle more than 3,000 wind turbine components this year, a record for the port.

This week port commissioners voted to add 25 acres of open storage for wind energy cargo and other breakbulk shipments. The new storage will be added in two phases. A 10 acre laydown yard is scheduled to be opened by the end of the first quarter of 2018. An additional 15 acre laydown yard will be opened a few months later.

Jarl Pedersen, the port’s chief commercial officer, said the additional laydown space will help Corpus Christi handle increasingly large components that the wind energy industry is using in its structures. Blades used for on-shore installation can be as long as 60 meters (197 feet).

Corpus Christi annually is among the top US ports for windmill blades, tower sections, and nacelles, or hubs. The port said its wind-energy volume this year will surpass its totals of 2,875 pieces last year and 2,603 in 2015.

Most of the port’s wind energy component shipments are shipped by rail to the interior of Texas, which ranks first in the United States in wind energy capacity, and to other states as distant as Oregon.

During recent years, Corpus Christi has concentrated on energy-related cargoes including crude oil, refined petroleum products, and petrochemicals, wind turbine components, and construction materials to support more than $50 billion in industrial projects under way in the area.

Those projects include a $10 billion ethane cracker that ExxonMobil announced this year, and a $13 billion natural gas liquefaction plant that Cheniere Energy plans to open in 2020.

Global Shipping Outlook: A Sneak Peek at 2021
Port Performance North America: Managing Cargo Flow During a Pandemic — and Beyond
END_OF_DOCUMENT_TOKEN_TO_BE_REPLACED