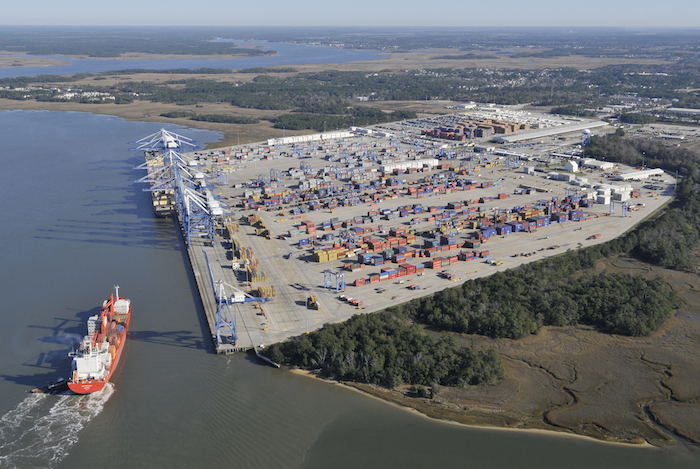 Wando Welch terminal in the Port of Charleston.

The Port of Charleston took a step closer to dredging its 45-foot-deep ship channel to as much as 52 feet after gaining the Army Corps of Engineers’ tentative approval of the project’s draft environmental impact statement.

The corps’ EIS sets in motion a process that within five years could provide Charleston, South Carolina, with the East Coast’s deepest channel, said James Newsome, CEO of the South Carolina Ports Authority.

“It’s an exciting day, a significant development for our port,” Newsome told JOC.com. He said the project will enable the port to handle “neo-Panamax” ships with capacities of up to 13,000-14,000 20-foot-equivalent units. The largest ships at Charleston now are 9,500 TEUs.

The EIS will be followed by a 45-day comment period and a pre-construction engineering and design review required for a corps chief’s report, which typically takes about a year. The next step would be congressional authorization, followed by dredging.

If all goes well, Charleston’s deepening project could be completed by 2019, and the channel to the port’s main Wando Welch container terminal could be deepened by 2018, Newsome said. He praised the corps for speedy action on the project, the first to receive a draft EIS under simplified procedures set out in last year’s Water Resources Reform and Development Act.

The corps studied the economics of providing channels of either 50 or 52 feet to Wando Welch and to a container terminal being built at the former Charleston Navy Base. Both options would provide a 48-foot channel to the port’s North Charleston terminal, which has an bridge clearance limitation of 156 to 160 feet.

Newsome noted that a 21 percent contingency factor is built into the estimates. He said the port authority hopes to use the pre-construction design and engineering phase to find ways to narrow the cost gap between the two channel depths.

South Carolina has set aside $300 million in state funds to pay the port’s share of the project. Newsome said the 52-foot depth “provides the most national economic benefit,” and that the Southeast needs a port with a channel deep to handle the region’s exports on larger ships. Export containers tend to be heavier than imports, which are dominated by lighter-weight consumer goods.

Virginia, Baltimore and Miami have 50-foot channels, and New York-New Jersey is close to completing its dredging to 50 feet. In the South Atlantic, the Port of Savannah plans soon to begin a $706 million project to deepen its 42-foot channel to 47 feet. 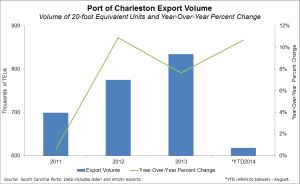 Newsome said exports comprise 48 percent of Charleston’s containerized cargo, and that exports of are expected to grow more rapidly than imports during the next five years. According to the port, export volume at Charleston in 2013 grew 7.7 percent from 2012 volume. Through August 2014, export volume totaled 617,957 TEUs, up 10.7 percent from the corresponding period in 2013.

The channel deepening would provide a 944-foot-wide channel that would allow passage of two neo-Panamax ships without tug assistance. The channel would be extended to 54-foot depth for three miles into the Atlantic.

How to Improve OTIF: 15 Tips for On Time and In Full Delivery
END_OF_DOCUMENT_TOKEN_TO_BE_REPLACED