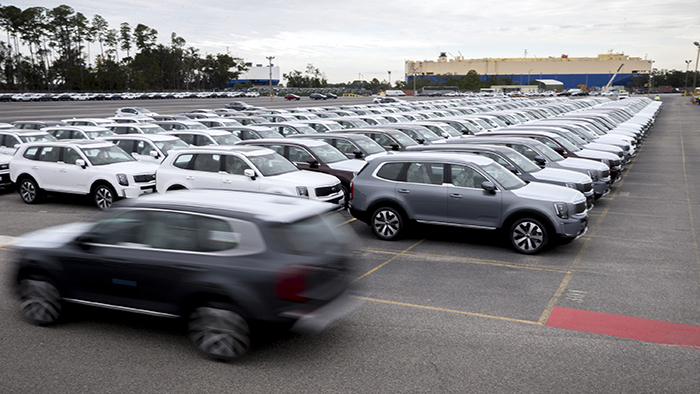 Kia's first Telluride sports utility vehicles (SUVs) were loaded for export to the Arabian peninsula onboard the roll-on/roll-off (ro-ro) vessel Glovis Sirius at the Port of Brunswick in late February.

Manufactured by Kia Motors Manufacturing Georgia (KMMG) in West Point, Georgia, the vehicles will be processed by International Auto Processing at Brunswick. Jimmy Allgood, Georgia Ports Authority (GPA) board chairman, said in a statement the port is playing an expanded role for KMMG, as GPA already handles imported components for manufacturing and will be exporting approximately 3,000 Kia Tellurides annually. Processing at Brunswick will include inspection, washing, applying wrap guard, installing tow hooks, and adjusting tire pressures.

All told, GPA moved more than 600,000 automotive units through the Port of Brunswick in 2018, according to the port. Nine ro-ro carriers call the GPA’s automotive facilities at Colonels Island, at the Port of Brunswick, while approximately 35 container services make weekly calls at the nearby Port of Savannah, also managed by GPA.

Kia has been manufacturing automobiles in West Point since 2009, producing more than 2.6 million vehicles, according to the company’s website. The facility has an annual capacity of 340,00 vehicles, building Sorento compact SUVs and Optima sedans in addition to Tellurides. About 90 percent of the cars built at West Point go to US dealerships.

Kia is a subsidiary of Seoul, Korea-based global conglomerate Hyundai Motor Group, which also includes Hyundai, the world’s third-largest automaker by volume, but the group’s sales and earnings have been adversely affected by growing trade protectionism and slowing growth in China and the US, as reported by Reuters.

As a result, the conglomerate is being restructured, according to a New Year’s address to employees given by Euisun Chung, who is expected to succeed his father as head of the group. The car maker faces further headwinds due to missing out on a surge in SUV popularity in the US and fumbling a US vehicle recall. The group expects to sell 7.6 million Hyundais and Kias in 2019, a 3 percent increase from 7.4 millions vehicles sold last year. That number came in below the company’s stated goal of 7.55 million vehicles, making it the fourth consecutive year in which Hyundai missed its annual sales goal, according to Reuters.