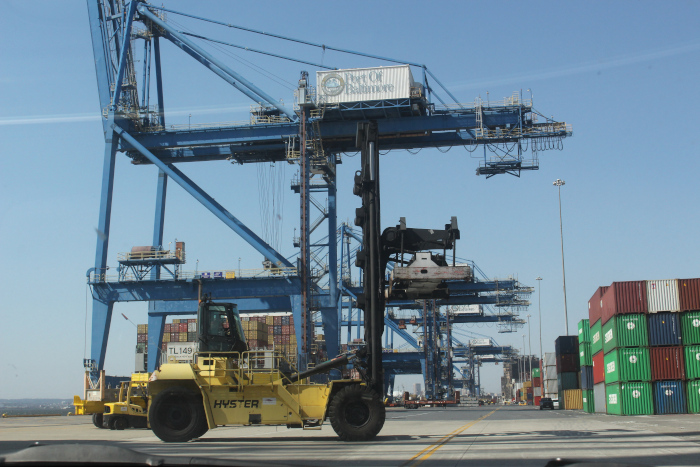 Older, polluting drayage trucks and equipment at the Port of Baltimore will be replaced with newer, cleaner versions with the help of federal funds. Photo credit: Hugh R. Morley.

A $1.8 million grant award to the Port of Baltimore, announced Monday by the US Environmental Protection Agency (EPA), will enable the port to replace 44 older dray trucks and four other pieces of cargo-handling equipment.

The funds will be used in the port’s Diesel Emissions Reduction Act (DERA) program that replaces older diesel-powered equipment with newer versions of the same equipment, the Maryland Port Administration (MPA) said in a statement. The cargo-handling equipment to be replaced includes forklifts, yard tractors, and other heavy cargo machinery, the MPA said.

DERA funds, which are administered by the EPA through its Clean Diesel Program, aim to reduce the amount of particulate matter, nitrogen oxides, and carbon monoxide in the air. The program helps ports around the country that are trying to strike a balance between environmental responsibility on one hand, and cost control and cargo efficiency on the other.

The issue is particularly salient at urban ports, such as the Port of New York and New Jersey, which received a $2 million EPA grant to remove 150 aging and polluting trucks from the port in February

The MPA also operates its own program to reduce air pollution at Baltimore, the Diesel Equipment Upgrade Program. The 11-year-old program has replaced more than 200 drayage trucks and 110 pieces of cargo-handling equipment, repowered 10 marine engines, and retrofitted 16 locomotive engines, the agency said.

“Through initiatives like our Diesel Equipment Upgrade Program and EPA’s Clean Diesel Program, we have reduced pollutants in the air around the port by more than 10,000 tons in the past 12 years,” said David Thomas, acting executive director of the MPA.