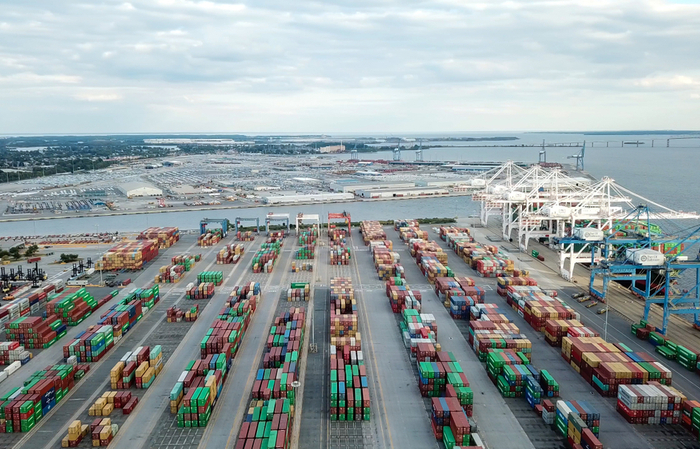 The Seagirt Marine Terminal is closing on two days and reducing gate hours due to cargo volume declines resulting from the coronavirus. Photo credit: Shutterstock.com.

The Port of Baltimore’s sole container terminal was closed Thursday and will close again March 17 in response to the decline in cargo volumes triggered by the coronavirus disease 2019 (COVID-19), the Maryland Port Administration (MPA) said Friday.

The move by Seagirt Marine Terminal, which is operated by Ports America Chesapeake, follows the company’s decision to cut the terminal’s gate hours to 7 a.m. to 4:45 p.m. from March 3, from the previous operating hours of 6 a.m. to 5 p.m. The MPA, in announcing the new gate hours, attributed the cut to “disruptions in the global supply chain” due to the coronavirus. Scher said the port is aware of one blank sailing so far, which will take place in March.

The March 17 closure will take place on a labor holiday that is optional depending on the business, according to a statement by Richard Scher, spokesperson for the MPA. The holiday is a joint celebration of St. Patrick’s Day and the birthday of Thomas William "Teddy" Gleason, former president of the International Longshoremen’s Association, which is part of the coastwide master contract. The statement said the other marine terminals in the port that handle non-containerized cargo will operate as normal.

The terminal closure echoes the strategy at the ports of Long Beach and Los Angeles, the US ports most heavily reliant on imports from China and, therefore, most affected by the fallout from the coronavirus. Marine terminal operators there have canceled dozens of shifts due to the drop in cargo volumes.

The Port of Baltimore is served by the 2M and the Ocean alliances, both of which operate services to China that stop at the port, Scher said, adding about 30 percent of Baltimore’s containerized imports come from China. Imports from Asia through Baltimore increased 4 percent year over year to 262,574 loaded TEU in 2019, making it the 10th-busiest port in the US by volume of imports from Asia, according to PIERS, a sister product of JOC.com within IHS Markit.

Baltimore’s total throughput of containerized cargo increased 10 percent to 65,665 loaded TEU in January, compared with the same month in 2019, MPA figures show. Scher said the volume increased again in February. He said the port is “expecting a decline” beginning in March, but did not know by how much. The port handled 822,899 loaded TEU in 2019, up 11.3 percent from 2018, the MPA figures show.