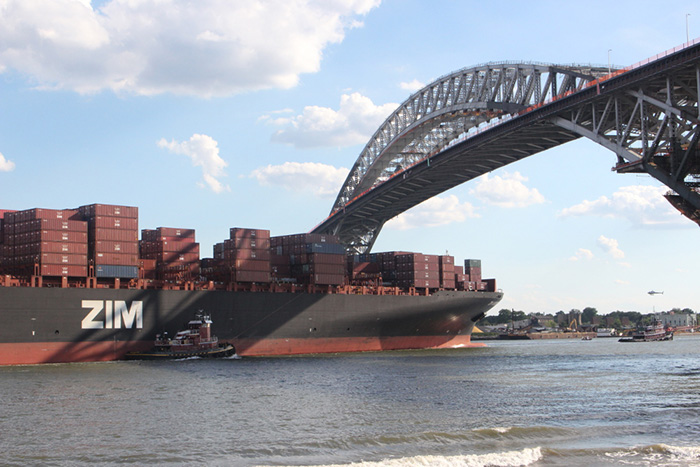 The Zim Antwerp passing under the Bayonne Bridge Monday, one of the first six ships of more than 10,000 TEU to pass under the bridge to the Port of New York and New Jersey.

The creation of a port-wide vessel traffic controller at the New York-New Jersey gateway is being discussed by Port of New York and New Jersey as way to mitigate or even prevent backups and delays of mega-ships up to 18,000 TEU.

In the wake of the arrival of the first 10,000-TEU ships this month under the newly raised Bayonne Bridge, a group of port users — among them representatives of the US Coast Guard, the Port Authority of New York and New Jersey, carriers, pilots, and tug companies — is looking at what agency is best placed to handle the task.

A Maersk representative, who said a key issue is which ships are allowed to enter the port first if there are several waiting, said what’s needed is something similar to an air-traffic controller in an airport.

Since New Jersey officials announced on June 8 that the Bayonne Bridge, with its air draft raised from 151 feet to 215 feet, was open to larger ships, six vessels of slightly more than 10,000 TEU — which could not have gone under the bridge in the past — have successfully done so. Ships need to pass under the bridge to get to three of the port’s four main terminals. Before the elevation project, most ships of more than 9,500 TEU couldn’t go under the bridge, or get to the three terminals, leaving only one terminal, GCT Bayonne, able to handle them.

The size of ships passing under the bridge is now expected to steadily increase, with the arrival of the first 14,000-TEU ship anticipated for the fall. Larger ships will require greater coordination and communication between the many parties involved in the port, according to the findings of an electronic simulation program conducted for the past year by pilots and others.

That’s in large part owing to relative narrowness of the Kill Van Kull, through which ships must pass to get to the three terminals, and the precision needed to ensure that vessel that the ship gets into the berth on schedule, with the logistical and human resources ready to service it quickly, and gets out on time.

Big ships, for example, will take longer to get into the port because they will have to go more slowly through the main entry channel to three of the main terminals, the simulations showed. The ships’ arrivals and departures will have be to be carefully scheduled because — unlike at present — they won’t be able to pass another large ship in the channel.

The ships’ far greater size, and the effect of the current on the handling and control of the vessel, means they will have to arrive an hour on either side of slack water — high or low tide — requiring more exactitude in the timing of arrivals and departures than in the past, the simulation showed.

Doug Morgante, senior director of government relations for Maersk, said it is clear that the port needs a central body to coordinate the different players involved in the arrival of a mega ship. He likened it to a port version of an air traffic controller. Maersk operated five of the six big ships that sailed under the Bayonne Bridge since it was raised but could not have gotten under the bridge in the past.

“If you have got four vessels lined up to come in, who prioritizes those vessels?” said Morgante. “What’s the fairest way to get the vessels in and back out? There doesn’t seem to be anyone governing that at the moment.

“So we need solutions from an operations perspective for efficiency purposes,” he said. “It’s one thing to be able to get under the bridge and that is certainly better now. But we need to be efficient.”

George Goldman, CEO of Zim USA, whose 10,000-TEU Zim Antwerp sailed under the bridge on Monday, also said it is clear that some sort of central coordinator will be needed in the future.

“As these vessels get larger and larger, it becomes more and more important,” he said, adding that the port is destined to get busier, and more congested. “Now is just the beginning.”

Beth Rooney, assistant director of the Port Authority of New York and New Jersey’s port division, said the group of stakeholders —  Vessel Coordination Work Group — will likely discuss the issue Thursday in the latest in a series of meetings looking at issues raised by the arrival of mega ships at Port Authority facilities. The Vessel Coordination Work Group was convened by the port authority to help implement the recommendations of the Deep Draft Committee.

The group has recognized the need for a controller type entity to coordinate the ships’ entries for a while, but no decision has yet been made on whether an existing agency, or a new one, would be best to take on the responsibility, Rooney said. At present, she added, there is no imminent need.

“It’s when we start having four, five, eight ships a day of a certain size or larger” that a controller will be needed, she said, adding that only two mega-ships per slack water — or eight a day — will be allowed in the channel to start with. “And we are nowhere near that tipping point. So we are ahead of the curve and working through these issues.”

Authorities are mulling the issue as competition among East Coast ports is expected to increase, in part because the raising of the Bayonne Bridge, coupled with the opening of the expanded Panama Canal, is expected to bring more, larger vessels to the coast.

The Port of New York and New Jersey is already struggling to hold onto its share of the coastal market — the port’s share of loaded TEU fell from 33.5 percent in 2010 to 29 percent in 2016 — and the port has invested heavily to prepare for the raising of the bridge. Port terminal operators have spent about $2 billion on upgrades and the Port Authority of New York and New Jersey and federal government have spent $4.7 billion on dredging, rail access, and other projects, including $1.6 billion toward raising the Bayonne Bridge.

The Port Authority has said “coordination and communication” will be key in the handling of mega-ships, because of the limitations of the Kill Van Kull. The need was highlighted in a list of recommendations put out by the Deep Draft Committee of the port’s Harbor Operations and Navigation Safety Committee, which were based on the outcome of the electronic simulation.

One recommendation said that ships must have confirmation that their route into the berth, and the berth itself, are clear before they leave Ambrose Channel, the point at which ships arrive before the enter the New York Harbor headed for the port.

Rooney said at present, the US Coast Guard, which has a Vessel Traffic Offices division in Fort Wadsworth, Staten Island, manages the safety of navigation and the movement of vessel traffic. However, the Coast Guard doesn’t get involved in deciding which ships should go in first because it doesn’t have the authority, she said, adding that in the past that decision making wasn’t needed because ships were smaller, so there were fewer channel limitations.

Jim Walker, director of navigation policy and legislation for the American Association of Port Authorities said most ports address “these traffic issues through the coordinated efforts of three key positions” — a harbor master, port pilots, and the coast guard.