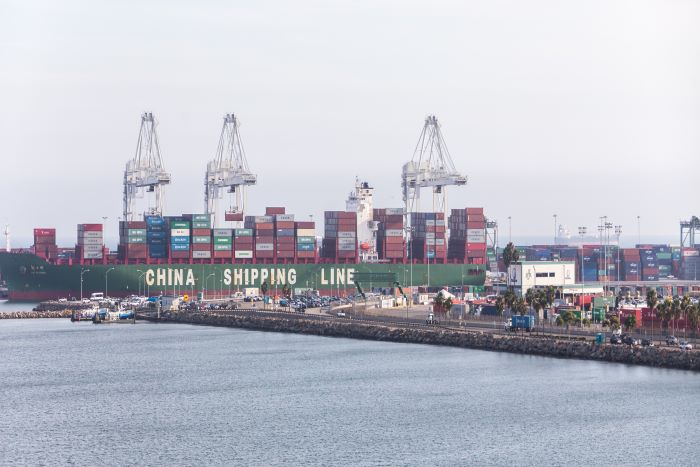 A study projected that a new fee meant to subsidize the purchase of clean trucks in the ports of Los Angeles-Long Beach could result in the diversion of 3.5 million TEU by 2035. Photo credit: Shutterstock.com.

A proposed fee meant to subsidize the purchase of clean trucks in the ports of Los Angeles and Long Beach could cause further cargo diversion from gateways, according to the Pacific Merchant Shipping Association (PMSA), which says a study on the economic viability of the fee requires significantly more analysis before it is implemented by the ports.

PMSA, which represents West Coast shipping lines and terminal operators in legislative matters, filed comments last week on the Clean Truck Fund Rate that port commissions are scheduled to vote on in the coming  months and implement by the end of this year.

The ports of Los Angeles and Long Beach are considering a fee of between $5 and $70 per TEU, with the proceeds to be used to subsidize the purchase of near-zero emission (alternative fuel) and zero-emission (battery or plug-in electric) trucks. Beneficial cargo owners (BCOs) would pay the fee, whether it’s passed onto them by drayage companies or they’re charged directly. Zero- and near-zero-emission trucks would be exempt from the fee.

In comments filed on the draft economic study for the Clean Truck Fund Rate that the ports released in December, PMSA said the fees under consideration “will have a profound impact on the competitiveness of the San Pedro Bay gateway.”

The study projected the fees could result in the diversion of 3.5 million TEU by 2035, which is the target year in the Los Angeles-Long Beach Clean Air Action Plan for achieving a harbor drayage fleet of zero-emission trucks. However, PMSA said the estimate “grossly understated” the potential loss of cargo.

PMSA noted that between 2006 and 2019, the Los Angeles-Long Beach port complex increased its container volume by only 8 percent, or a compound annual growth rate of 0.57 percent. By contrast, Savannah grew 113 percent, for a CAGR of 5.99 percent, and New York-New Jersey grew its volume 41 percent, or a CAGR of 2.9 percent.

Among its several concerns with the study, PMSA said it did not consider the impact the fees would have on low-value export commodities that can be priced out of global markets by even slight cost increases in the transportation supply chain.

When the draft report was released in December, the ports solicited comments from the transportation community, including BCOs and truckers. At the time, the ports emphasized that they want to develop a plan that will help the drayage industry transition to cleaner trucks, while at the same time avoiding a loss of discretionary cargo to other ports.

“We want to understand what setting the rate will do to our competitiveness,” Rick Cameron, deputy executive director of planning and development at the Port of Long Beach, told JOC.com in December. “We are not taking this lightly. We are taking it seriously.”

PMSA also said the question of whether the fee should be assessed to the drayage companies, which would presumably pass it on to their BCO customers, or directly on the BCOs, must be resolved. “Does anyone believe that truckers and cargo owners have either (1) the same pricing power or (2) the same ability to avoid fees?” it asked.

Although the study performed by Davies Transportation Consulting analyzed a fee of between $5 and $70 per TEU, the draft report concluded that a fee of $35 to $50 per TEU would produce enough revenue to adequately subsidize drayage operators that purchase cleaner trucks. A new diesel truck costs about $125,000. Near-zero emission trucks today cost about $250,000, and battery or plug-in electric trucks cost as much as $320,000 each, according to the report, although the cost of the zero- and near-zero emission trucks is expected to fall as they are produced in commercial quantities.