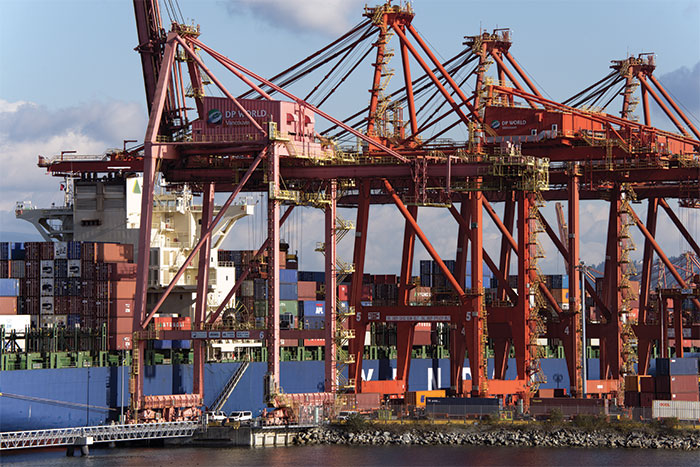 Port Metro Vancouver, the DP World terminal of which is pictured, is running up against its capacity limitations, which could provide an opening for its U.S. rivals Seattle and Tacoma to the south.

Cargo volumes currently may be lackluster, but ports in the U.S. and Canadian Pacific Northwest are planning feverishly for the larger cargo surges they know will occur in the coming years from big ships operated by powerful carrier alliances.

“It’s obvious there will be increased consolidation with bigger container exchanges from fewer ships coming at us faster,” said Peter Xotta, vice president of planning and operations at the Vancouver Fraser Port Authority in British Columbia. “It’s impacting all North American ports. We’re no different,” he said.

The Canadian Pacific Northwest ports of Vancouver and Prince Rupert had a strong year in 2015, partly because of the diversion of cargo from U.S. West Coast ports as a result of labor disruptions, although cargo flows this year are returning to normal. Total laden containers in Port Metro Vancouver last year increased 2.5 percent from 2014, according to PIERS, a sister product of JOC within IHS Markit. However, total laden containers moving through Vancouver in January through May this year declined 4.3 percent year-over-year, according to numbers posted on the port’s website.

Prince Rupert, about 500 miles to the north, experienced strong growth in 2015, with total laden container volumes increasing 14.3 percent, according to PIERS. In January through May this year, Prince Rupert’s laden container volume grew 2 percent from the same period last year, according to the port’s website. Prince Rupert, with direct intermodal rail service to Chicago by the Canadian National Railway, ships about two-thirds of its container traffic to or from the U.S.

Because much of the U.S. cargo that was diverted last year has returned to Seattle-Tacoma, Prince Rupert is concentrating on expanding its export base, especially export cargoes from Canada, port spokesman Kris Schumacher said. Total laden imports in January through May are up 1 percent, while exports increased 3 percent.

Seattle and Tacoma, which formed the Northwest Seaport Alliance last year to better position the gateway to compete with ports to the south and north, fared better in 2015 than the California ports. According to PIERS, total laden container volume in Seattle-Tacoma in 2015 increased 1.3 percent, while Los Angeles experienced a decline of 7.4 percent and Long Beach, a drop of 1.1 percent.

Although all U.S. West Coast ports were hit by work slowdowns by the International Longshore and Warehouse Union, and employer retaliation by the Pacific Maritime Association, during coastwide contract negotiations, the Northwest Seaport Alliance received a boost when cargo was diverted from Portland, Oregon, because of a local labor dispute. At this time, the Oregon port has no weekly container services. Seattle-Tacoma continues to hold on to the market share it regained this year, with laden imports up 1.1 percent and exports 12.2 percent higher in the first six months, compared with the first half of 2015.

Mega-ships challenge ports on both sides of the border

Regardless of the ebb and flow of container volumes, shipping lines are determined to increase the size of vessels calling in the Pacific Northwest in order to benefit from the low per-unit slot costs afforded by big ships. All of the ports in their trans-Pacific services receive weekly calls with vessels in the range of 6,000 to 8,000 twenty-foot-equivalent units. Seattle earlier this year received a test call from the 18,000-TEU CMA CGM Benjamin Franklin, demonstrating that it could handle the largest vessel ever to call in North America.

To handle the mega-ships, the ports have a two-pronged strategy. They are building more marine terminal and inland infrastructure connectors so they don’t get shut out by carriers because of insufficient capacity. Those are multiyear projects, though, so the ports are also focusing on improving operational efficiencies in order to accommodate the cargo surges that are present today. “I don’t think we can just buy our way out of these challenges,” Xotta said.

Seattle-Tacoma has been focusing on raising its level of service for some time now, given the gateway’s heavy reliance upon intermodal services to destinations in the Midwest and the East. The Operations Center is a team of supply chain specialists that concentrates on every aspect of the port’s supply chain, including vessel, marine terminal, labor, rail and truck operations, said John Wolfe, CEO of the Northwest Seaport Alliance.

The Operations Center works in real-time to ensure the gateway’s operational needs are satisfied daily, and it also accumulates data and processes the information to develop strategies that will prevent congestion from developing, he said.

The Executive Advisory Council is a more recent creation, with 40 to 50 leaders from throughout the port-related transportation community, Wolfe said. The group is divided into teams that focus on specific areas of the port. They keep scorecards of key performance indicators such as crane productivity, gate times and rail productivity, and they meet periodically to analyze the metrics.

The Northwest Seaport Alliance places a strong emphasis on customer service because of the unique challenges it faces in its own backyard, Wolfe said. Los Angeles-Long Beach, for example, is more concerned about the potential loss of business to East Coast ports from the newly expanded Panama Canal, but Seattle-Tacoma competes directly with Vancouver and Prince Rupert in the same region for a specific but important market — Chicago.

Although the Northwest Seaport Alliance and the Canadian ports have excellent rail service to the Chicago hub, the Canadian National and Canadian Pacific railroads price their services to Chicago more aggressively than do the BNSF and Union Pacific railroads through Seattle-Tacoma. In the Federal Maritime Commission’s fourth annual update on containerized cargo moving through Canadian and Mexican ports, Commissioner Richard Lidinsky said, “The FMC has found that Prince Rupert holds a cost advantage over West Coast ports, which could be in the range of $250 to $400 per FEU (40-foot container unit) to Chicago via rail.”

“This means we have doubled down on service delivery,” Wolfe said. “We focus on consistent, reliable service so we can plan the flow of cargo for our stakeholders.”

The Canadian ports have the same philosophy. Prince Rupert’s unique operating model has raised service to a new level. The port has a single terminal, with intermodal rail on dock. Almost all of the cargo moves via intermodal rail to the eastern half of North America. CN Railway has two inbound and two outbound trains each day, seven days a week. The port’s operating model is to rapidly unload vessels, transfer the containers to rail with as little dwell time as possible, and reverse the process for export loads, Schumacher said.

Vancouver, with four container terminals, operates with a mix of truck and rail cargo, so gate operations are crucial to the delivery of service. Furthermore, Vancouver has an especially vocal harbor drayage community. The drivers in past years have engaged in crippling work stoppages to protest working conditions and wages. As a result, the port authority has worked with the terminal operators and truckers to develop programs such as mandatory trucker appointments and a regular schedule of extended gates.

Vancouver, with an average 40-minute truck visit time, is a leader among West Coast ports that generally shoot for 60 minutes as their goal. “Wait times are a non-issue,” Xotta said.

Nevertheless, Vancouver is engaged in a ground-breaking endeavor to develop a single portal through which the trucking community can communicate in real time with all of the port’s container terminals. Xotta said he is confident the single portal will be completed by the end of 2016 and rolled out next year. It would become the first such portal at a North American port, and a boon to productivity.

Big ships, with their huge cargo discharges, have strained the marine terminal and inland transportation infrastructure of all of the ports in the region. The ports are therefore investing hundreds of millions of dollars over the next 15 years to ensure that capacity remains ahead of demand. It will be a close call, however. This is especially true in Vancouver.

The port’s current annual capacity is listed as 3.7 million TEUs, and last year the port handled about 3.1 million TEUs. Xotta said the port community’s emphasis on marine terminal, gate and rail efficiency will keep the cargo moving even as it approaches the design capacity of existing facilities. At the same time, Vancouver is working with its terminal operators in the Inner Harbor to expand their capacity while longer-term projects are developed.

A redevelopment project is underway at the Centerm facility to increase the capacity of the terminal by two-thirds, Xotta said. The project is out for consultation with the stakeholders and larger community. If the environmental prerequisites are approved on schedule, construction could begin next year, with completion of the project by 2019.

The Deltaport Terminal, Road and Rail Improvement Project is unfolding in four different areas of the facility to improve cargo handling and truck mobility, and streamline the transfer of intermodal containers to trains and Vancouver’s largest container terminal. The projects are in various stages of design and construction and will eventually expand the capacity of Deltaport to 2.4 million TEUs from its current 1.8 million TEUs.

Longer term, Vancouver is in the early stages of planning for the new, three-berth Terminal 2 project at Roberts Bank. The facility will have an annual capacity of 2.4 million TEUs, and the target date for completion is the mid-2020s.

Prince Rupert is progressing smoothly with the first of two projects to expand its Fairview Container Terminal. The project at the north end of the terminal is scheduled for completion in the third quarter of 2017, or possibly a month or so earlier than that, Schumacher said. The north expansion will increase the port’s annual capacity to 1.3 million TEUs from the current 850,000 TEUs. A possible expansion of the terminal to the south is being studied, and if the project moves forward, it will give Prince Rupert a total capacity of about 2.4 million TEUs.

The Northwest Seaport Alliance is working through its strategic planning process to reconfigure, combine or repurpose the nine existing terminals that are split between Seattle and Tacoma. In the Central Peninsula (Tacoma), the Husky terminal is being rebuilt and modernized to accommodate vessels as large as 18,000 TEUs.

In the North Harbor (Seattle), the former APL Terminal 5 has been shut down and the business moved over to Terminal 18. The SSA Marine-operated Terminal 18 earlier this year successfully handled the 18,000-TEU Benjamin Franklin on its test run to Seattle. Wolfe said design work on Terminal 5 is about 90 percent complete, and construction on what is now a vacant facility could begin later this year. When completed, the terminal will be able to handle two 18,000-TEU ships simultaneously, he said.

The past two years in the Pacific Northwest have been unusually eventful, with the Canadian ports growing at a faster clip than Seattle-Tacoma, and Portland losing its container business. Now it appears that the reset button has been pushed and the Northwest Seaport Alliance is regaining much of the business that was diverted to the Canadian ports in 2014 and 2015.

Wolfe said it is difficult to measure how much cargo was lost last year and how much has returned, but the trade appears to be back to its normal trade flow. Also, he noted, Seattle-Tacoma is increasing its natural trade flow because of rapid development of industrial warehouse and transload facilities in proximity to the harbor, which will increase the gateway’s captive cargo base.

Because the Northwest Seaport Alliance’s hinterland is through the Upper Midwest to Chicago, Wolfe doesn’t expect much if any loss of market share to services through the expanded Panama Canal. Given the transit time advantage of about two weeks to the U.S. interior versus the canal routing, Seattle-Tacoma will maintain its market share through continued improvements in service delivery and by working closely with the BNSF and UP railroads to expand their intermodal capacity along the Northern Corridor, Wolfe said.

CN looks to break up KCS-CP merger with rival bid