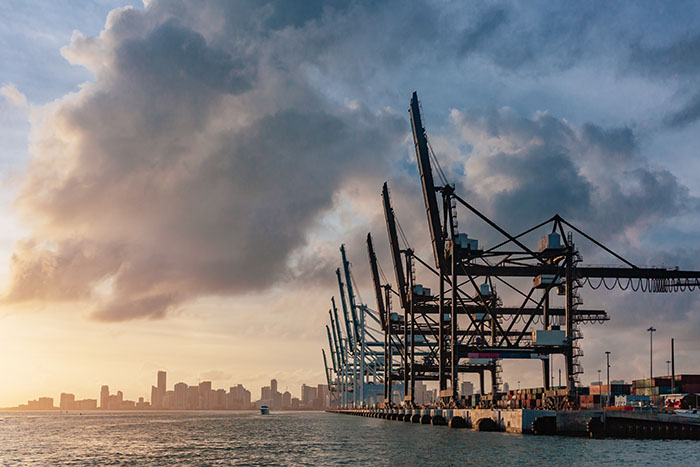 Total container imports across the eight busiest container ports in the US Southeast jumped 8.6 percent year over year in October 2020. Photo credit: Shutterstock.com.

In the US Southeast, 2021 is expected to be a busy year for port authorities after volumes quickly rebounded from the lows seen in the early days of the COVID-19 pandemic.

Port officials tell JOC.com upwards of $850 million in capital expenditures across the region will be focused on allowing terminals to handle multiple vessels of 14,000 TEU and above simultaneously, including the completion of dredging projects, rail yards, and berth improvements and placing new ship-to-shore cranes into service, as well as the opening of a new terminal at one port. That combined capex covers fiscal year 2021 budgets, which run from July 1, 2020, to June 30, 2021.

Work to improve the shipper experience from the vessel discharge to the loading on trucks and trains to leave the port will be addressed in the capital expenditures, particularly in the three major hubs: Charleston, South Carolina; Norfolk, Virginia; and Savannah, Georgia.

Port authorities have reason to be optimistic heading into 2021, because cargo volumes have quickly recovered from last spring. Volume tumbled in the spring and early summer during the pandemic, down between 10 percent and 25 percent year over year across the Southeast. Volume recovered by November, however, as laden imports were up year over year in every Southeast port except for Wilmington, NC, and Jacksonville, Fla., according to PIERS, a sister product of JOC.com within IHS Markit.

In October, total laden imports across the eight busiest container ports in the region — Baltimore, Charleston, Everglades, Jacksonville, Miami, Norfolk, Savannah, and Wilmington — rose a combined 8.6 percent compared with the same month in 2019. Even after travel restrictions were lifted, consumers were nervous about going to crowded tourist destinations, so they purchased products to improve their home life, such as furniture and other home improvement goods.

By contrast, total laden imports across the same ports were down 19.2 percent year over year in May, according to PIERS.

Laden exports have improved but not as quickly as imports. Exports across the eight ports plunged 21 percent year over year in April but were down only 1 percent in September, according to PIERS. Port authorities in Georgia and South Carolina are confident the export numbers will climb in 2021 as new resin packaging plants become fully operational. Ocean carriers appear to be repositioning containers as quickly as possible, favoring empty boxes back to Asia and Europe than full loads.

Whether the upward volume trend will continue, however, will depend on three variables. First, will trade with China and South Korea grow or shrink in 2021? Nearly 55 percent of all imports into the Southeast are from Asia, about 43 percent from Northeast Asia, and 10 to 12 percent from Southeast Asia.

Second, will there be a rise in consumer demand for polypropylene from polyethylene plastics — generally referred to as “resins” — abroad in 2021 to supply work for new factories online in South Carolina and Georgia?

Third, will the Southeast ports be able to complete critical infrastructure upgrades to handle large container ships on time?

In Norfolk, two ship-to-shore cranes are undergoing testing and should be put into service sometime in January, according to the Virginia Port Authority (VPA). Once the cranes are operational, Norfolk International Terminals (NIT) and Virginia International Gateway (VIG) will each have 15 ship-to-shore cranes capable of handling up to 19,000 TEU, enough to service three vessels simultaneously in each terminal.

This marks the end of a four-year, $1.5 billion renovation at NIT and VIG, except for a multiyear project to increase the size of NIT’s railyard, which houses Norfolk Southern Railway and the Norfolk & Portsmouth Belt Line Railroad, a short-line railroad.

VPA officials say they will focus their attention on securing approval and funding to deepen the Norfolk harbor from 50 feet to 55 feet and widen the Thimble Shoals Channel to 1,400 feet. The latter is required to allow larger container ships to turn and pass one another side by side without shutting down all marine traffic.

In Charleston, the opening of the Hugh K. Leatherman terminal in March will mark a major milestone for the port. The facility will have one berth capable of handling ships up to 19,000 TEU and a capacity of 700,000 TEU annually. The five ship-to-shore cranes to handle the vessels arrived in October and November 2020. The port’s existing Wando Welch Terminal can handle three 15,000 TEU vessels simultaneously, but not a 19,000-TEU vessel.

The South Carolina Ports Authority is also hopeful a dredging project to deepen the Charleston Harbor to 52 feet will be complete in late 2021, although the US Army Corps of Engineers projects a completion date of 2022. With the final two contracts having been awarded in September 2020 and the Virginia dredging project at least three years away from completion, the Charleston Harbor will become the deepest on the East Coast, at least for the time being.

Both Charleston and Savannah should see a boost in export volume in 2021 thanks to new resin packaging plants that began operating in 2020. A&R Logistics opened its 615,000-square-foot Moncks Corner, SC, plant in September and a similarly sized facility in Effingham County, Ga., in November. A&R Logistics expects the factories will contribute 50,000 TEU in exports per year to each port, or 100,000 TEU combined. Separately, Frontier Logistics opened a 550,000-square-foot facility on the former North Charleston Naval Base, which will provide the Port of Charleston even more exports in 2021.

Savannah will also have a deeper harbor within the next 12 months to handle the largest vessels. The inner harbor will be deepened to 49 feet in late 2021. While it won’t completely eliminate tidal restrictions for vessels over 14,000 TEU during low tides, the Georgia Ports Authority (GPA) has said it will make such a situation rare.

Service into the US interior from Savannah will also get a boost when the port’s Mega Rail Terminal is complete in late 2021. Approximately 75 percent of the work is complete, with the remaining portion involving the CSX Transportation yard, according to GPA. With nearly 25 miles of track, the Mega Rail terminal will be able to accommodate six 10,000-foot trains arriving or departing simultaneously across eighteen working tracks between Norfolk Southern Railway and CSX.

Griff Lynch, CEO of the GPA, said shippers moving containers to the Mid-South and Midwest will benefit from a “1, 2, 3” strategy: one day to get containers from ship to rail, two days on the rail to any destination (except possibly Chicago), and cargo picked up and delivered to the beneficial cargo owner (BCO) upon arrival at destination on the third day.

Port Everglades will put three new “low-profile” ship-to-shore cranes into operation in January, which extend out rather than up, because of nearby Fort Lauderdale–Hollywood International Airport.

In Jacksonville, work to renovate a second 700-foot berth in SSA Marine’s Blount Island Marine Terminal will be completed late in the year to allow two ships to be handled simultaneously. It will not be long enough, however, to handle two post-Panamax container ships. Work will continue to dredge Jacksonville’s harbor to 47 feet to Blount Island and Port Everglades’ harbor to 48 feet, but both projects will take several more years to complete.