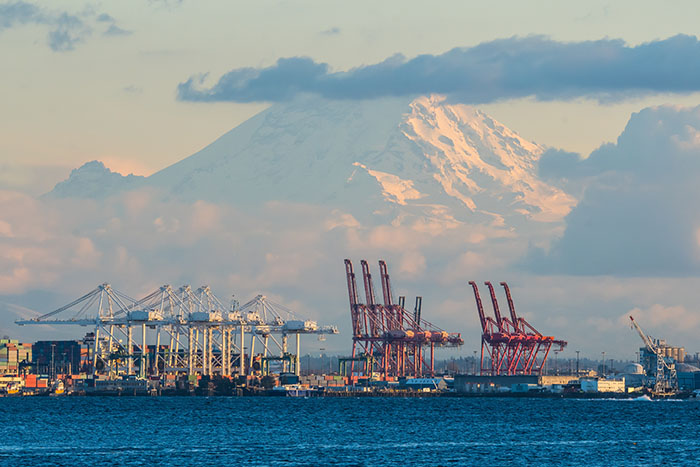 The Northwest Seaport Alliance (NWSA) ports of Seattle (pictured) and Tacoma handled 36.7 percent of imports moving through the Pacific Northwest in the first 10 months of 2020, down from 38.8 percent in 2015. Photo credit: Shutterstock.com.

The Port of Oakland and the Northwest Seaport Alliance (NWSA) of Seattle and Tacoma will spend 2021 locked in a battle for market share of US imports from Asia on two fronts: with the British Columbia ports of Vancouver and Prince Rupert, and with US East and Gulf Coast ports.

The eastbound trans-Pacific is the largest and most competitive trade for North American ports. All US West Coast ports have a transit time advantage of 10 days to two weeks over East and Gulf coast ports in competing for time-sensitive merchandise. However, they are at a cost disadvantage due to higher intermodal rail rates to the US interior.

East and Gulf coast ports have direct access to imports from China, Japan, Taiwan, and South Korea via the Panama and Suez canals. Although transit times are longer than via West Coast gateways, the all-inclusive freight cost, including truck or rail service to population centers throughout the eastern half of the country, provides a clear advantage to East and Gulf coast ports.

Oakland fared better than the Seattle-Tacoma gateway when US imports exploded in the second half of 2020 due to the routing of Pacific Southwest services. The Northern California port experienced a steady increase in imports from Asia beginning in July. US retailers concentrated much of their imports from Asia through the ports of Los Angeles and Long Beach in the second half of the year. Trans-Pacific services to the Pacific Southwest call Los Angeles–Long Beach first and then stop in Oakland before returning to Asia.

US imports from Asia in Oakland increased 9.5 percent in July through October compared with the same months in 2019, according to PIERS, a sister product of JOC.com within IHS Markit.

In contrast to Oakland’s growing imports, US imports from Asia moving through the NWSA declined 2.5 percent in July through October compared with the same months in 2019. That reflects the increasing competition from Vancouver and Prince Rupert for imports destined for Chicago and the upper Midwest.

That competition will only intensify in the coming years, according to a study released in September by the Seattle-area consulting firm Mercator. The study, which covered all West Coast ports, concluded that the British Columbia ports have a “route-cost advantage” of US $400 to $500 per container over US West Coast ports in serving core markets in the Midwest. Vancouver and Prince Rupert have direct intermodal service to Chicago via the Canadian National and Canadian Pacific railroads.

Mercator described the route-cost advantage of the British Columbia ports as a combination of lower marine terminal-to-rail transfer costs, port charges, and lower intermodal rates to Chicago. Also, shipments through the Canadian ports do not incur the federal harbor maintenance fees charged on imports through US ports.

Seattle and Tacoma since 2015 have lost market share to the British Columbia ports, especially Prince Rupert, and that trend will continue in the coming years as the Canadian ports increase their capacity through expansion projects scheduled for completion in 2022–23, according to Mercator.

The NWSA handled 34.2 percent of the laden imports that moved through the North American Pacific Northwest region of Seattle, Tacoma, Vancouver, and Prince Rupert in the first 10 months of 2020. That is down from 39.5 percent in 2015, according to PIERS and data from the British Columbia ports. Vancouver’s share of the region’s imports has grown slightly, from 47.2 percent in 2015 to 48.2 percent last year, while Prince Rupert’s share increased from 13.3 percent from 17.5 percent in 2015.

The Canadian ports say that the route cost advantages they have over the US West Coast ports are not the only reason for their increasing market share. The British Columbia ports offer a total package of efficiencies including shorter transit times from North Asia as well as efficient transfer of containers from vessel to rail, port officials say.

However, the ports of Vancouver and Prince Rupert are operating at 80 to 85 percent of capacity, so they have little buffer to handle containers when events in Canada’s interior compromise intermodal rail service. That scenario played out last year when protestors blocked rail lines over a proposed gas line through indigenous territory, and rail equipment and service issues pushed congestion and delays back to the ports of Vancouver and Prince Rupert. Because Seattle or Tacoma are often called by the same vessels, they can capitalize on attracting shipments to the US interior when Vancouver or Prince Rupert experience congestion.

The NWSA has a three-pronged strategy to protect its market share in competition with the British Columbia ports and US East Coast ports. That strategy involves infrastructure expansion to increase terminal capacity, process improvements to improve cargo efficiency, and intermodal enhancements to extend the gateway’s reach into the US interior.