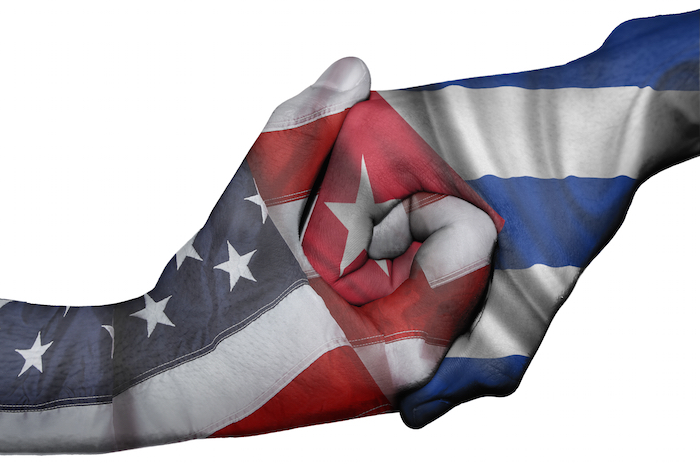 Amid weeds and willows on the Mississippi River levee at Belle Chasse, Louisiana, a curving row of weathered wooden pilings bears silent evidence to the once-thriving trade between U.S. Gulf ports and Cuba.

The long-abandoned site on the river’s west bank, 20 miles downstream from New Orleans, is the remnant of a rail ramp that Seatrain Line used to load railcars on ships that shuttled between the Gulf and Cuba from the 1920s to the 1950s.

Cuba was the Port of New Orleans’ top trading partner before the Castro takeover and the U.S. trade embargo in 1961. The island nation also was an important market for other Gulf ports such as Mobile and Tampa.

That trade abruptly ceased with the embargo, and has been largely off-limits for more than a half century. The door cracked open slightly in 2001, when the U.S. permitted U.S. companies to export agricultural commodities for humanitarian reasons.

Now President Obama’s proposal to restore U.S.-Cuba diplomatic trade relations has kindled interest in increased shipments between the nations, and is raising hopes among Gulf ports and shippers that a new market could develop almost in their front yard.

“It’s a big step in the right direction,” said James K. Lyons, CEO at the Alabama State Port Authority at Mobile, which is only 2 1/2 days sailing time from Havana.

Port Tampa Bay sees itself as “a natural gateway to Cuba when ties are re-established, particularly in view of our historical ties and short transit time of 15 hours,” CEO Paul Anderson said.

Gary LaGrange, CEO of the Port of New Orleans, said his port is following developments closely and is eager to take advantage of opportunities in Cuba. But he and other port officials are keeping their excitement in check for now. “We’re not dancing yet,” LaGrange said. “Congress still has to remove the embargo, and I don’t know the likelihood of that. But we see a lot of hope and possibility for the future, if and when the embargo is dropped.”

Few expect Congress will act soon to overturn the broad embargo, including the 1996 Helms-Burton Act, which codified many sanctions introduced over decades. U.S. companies still must jump through financial hoops that competitors from other nations don’t face.

Under Treasury Department rules, even permitted U.S. agricultural exports have had to be paid up front in cash, through third-party financial institutions. The restrictions on direct financing continue to limit the volume of trade to and from the island.

“That’s been a big impediment,” said business consultant William Gotimer Jr., former co-CEO of Trailer Bridge, which operates between the U.S. mainland and Puerto Rico and the Dominican Republic. “Removing the restrictions on banking and mechanisms for payment will make it much easier to conduct trade.”

Obama followed up his December announcement of plans to end the embargo with a series of steps that included easing of restrictions to allow increased export of building materials and U.S. telecommunications and other technological goods to Cuba.

Agricultural and medical supplies already were allowed, but only with a specific license and on a cash-in-advance basis. Now, specific licenses are not required, and a cash payment will be due only when goods arrive at a Cuban port. But trade volumes will be limited until U.S. financing is on par with that of other nations.

When Aliport, Cuba’s state purchasing agency, has the choice of buying Vietnamese rice with 180 to 360 days of credit and financing or U.S. rice on cash terms, “they’re going to go with the guys that give them credit,” said Ricky Kunz, vice president of trade development and marketing at the Port of Houston.

Limited volumes of U.S. goods have been shipped directly to Cuba since December 2001, when the Cold War-era U.S. trade embargo was revised to permit U.S. companies to export agricultural commodities to the island for humanitarian reasons. U.S. imports from Cuba remain banned.

Even with the current limitations, there is a modest volume of U.S. exports to Cuba. Crowley has regular liner service from Port Everglades, and several operators, including New Orleans-based Dan-Gulf and Crimson Shipping in Mobile, serve the island with chartered vessels. Many of the shipments are poultry products.

When the Cuban market opens, it will be different from what it was before 1961, LaGrange said. In its heyday, trade between New Orleans and Cuba was dominated by sugar and coffee.

Development of post-embargo trade in consumer goods to Cuba will have to await development of a middle class, LaGrange said. He foresees trade growth along the lines of many developing countries, starting with labor-intensive production such as apparel.

Roger Guenther, executive director at the Port of Houston, said his port has worked for years with the Texas-Cuba Trade Alliance, and will be ready when the embargo is lifted. “We think Houston is a natural gateway for trade with Cuba when that opportunity presents itself,” he said. “They need a lot of products that we have.”

Canada Trade and Shipping Outlook
TPM22: What We Learned — Container Shipping in the Crosshairs
Managing E-Commerce From Order to Delivery and Beyond
END_OF_DOCUMENT_TOKEN_TO_BE_REPLACED