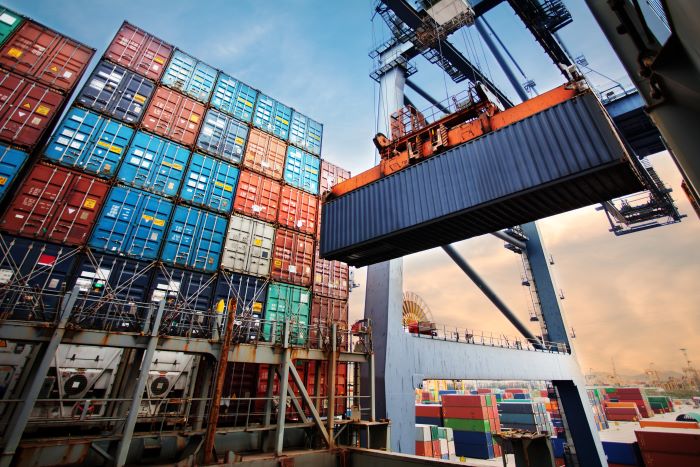 Although November imports were up, the National Retail Federation expects December volumes will drop, in part due to new tariffs taking effect in mid-December. Photo credit: Shutterstock.com.

Editor's Note: An earlier version of this story inaccurately stated November forecasts as actual container volume, due to a mistake in a Global Port Tracker release.

Container volumes at a dozen major United States ports will spike to their highest level since August as retailers front-loaded imports to beat the next round of US tariffs against China due to take effect Dec. 15, according to estimates provided Monday by the National Retail Federation (NRF).

November volumes are forcecast to jump to 1.95 million TEU, up 3.7 percent from 1.88 million TEU in October and an 8 percent year-over-year gain, NRF said in its Global Port Tracker report, as compiled by Hackett Associates.

“At this point, holiday merchandise is already in the country, so the direct impact of new tariffs won’t be seen until the season is over,” Jonathan Gold, NRF’s vice president for supply chain and customs policy, said in a statement. “Nonetheless, tariffs are bad for both consumer and business confidence, and we hope that the December tariffs will be canceled or postponed as a sign of good faith.”

President Donald Trump in early October said the United States and Chain had reached agreement on “phase one” of a new trade deal. But the deal has yet to be signed and Trump last week mused that he might wait until the 2020 elections are over before agreeing to full trade deal with Beijing. The NRF has been an outspoken critic of the Trump administration’s trade policies, specifically import tariffs on Chinese goods.

“We need a deal with China as soon as possible so we can bring an end to the trade war that has put a drag on the US economy for far too long,” Gold said.

A 15 percent tariff on an additional $160 billion in Chinese imports, including footwear and apparel, is scheduled to take effect Dec. 15.

NRF forecasts December container volumes will drop to 1.79 million TEU “because of the new tariffs and the usual falloff in imports as the holiday season winds down.” The December projection would be an 8.9 percent decline from December 2018, when retailers rushed imports to beat tariffs that were due to take effect Jan. 1, 2019, but subsequently delayed. January 2020 volumes are projected to be 1.87 million TEU, down 1.2 percent from January 2019.

“The US consumer has shrugged off the slowdown in the economy,” Hackett Associates founder Ben Hackett said in the statement. “Even though growth has slowed, low unemployment and higher wages have helped bolster purchases and, thereby, imports for consumer goods.”

Still, Hackett said the 20-month US-China trade war is “one of the factors that is impacting our forward-looking models as we continue to show slower long-term growth in import volumes.”

NRF said full-year 2019 volumes are expected to see a record 21.9 million TEU, which would marginally best the 21.8 million TEU from last year.

November import data from PIERS, a sister company of JOC.com within IHS Markit, will be published next week.