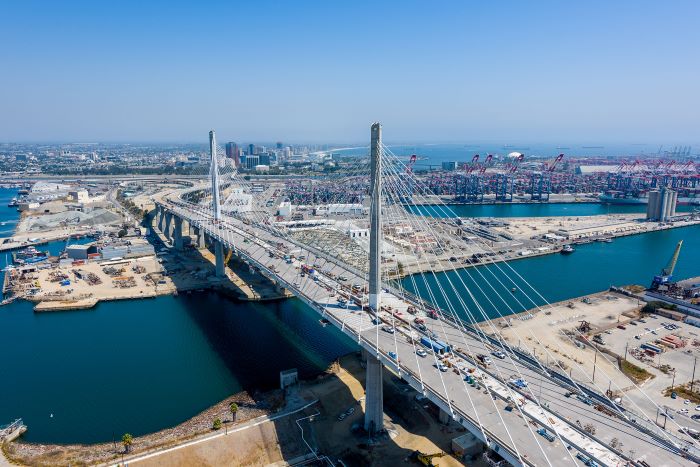 Completion of the new Gerald Desmond Bridge, which has been under construction since 2013, should result in an immediate improvement in truck flow at the ports of Long Beach and Los Angeles. Photo credit: Port of Long Beach.

Traffic will begin to flow Monday on the new Gerald Desmond Bridge in Long Beach, the first of several infrastructure projects scheduled for completion over the next few years that will increase cargo velocity and capacity in Southern California.

Completion of the $1.47 billion bridge, which has been under construction since 2013, should result in an immediate improvement in truck flow at the ports of Long Beach and Los Angeles as the port complex continues to handle record import volumes this fall.

“This will be big, in my opinion,” said Alan McCorkle, president and CEO of Yusen Terminals in Los Angeles. “It should reduce transits by 10-15 minutes each way.”

Simply clearing the construction equipment from the area under the bridge and from the roadways leading to the bridge will produce an immediate improvement in truck velocity, said Ed DeNike, president of SSA Containers, which operates three terminals in Long Beach. “It absolutely will have an impact,” he said.

The new bridge will replace the aging Gerald Desmond Bridge, which handles about 15 percent of US imported containers, according to the port. The new span, similar to the bridge it replaces, links the ports of Long Beach and Los Angeles with roads and freeways that serve about 1.8 billion square feet of industrial warehouse space in the region. It also serves the rail ramps that link the Union Pacific and BNSF networks to the eastern half of the country. Long Beach estimated that about 68,000 vehicles, including 35,000 trucks, transit the bridge daily.

US imports from Asia increased rapidly in late June and accelerated through September as the economy continued to rebound from the lockdowns put in place in the early days of the coronavirus disease 2019 (COVID-19) outbreak. Asian imports in the Los Angeles-Long Beach port complex in August increased 22.2 percent over August 2019, according to PIERS, a JOC.com sister company within IHS Markit. McCorkle said September numbers could be even higher when they are published later this month.

The US import surge should continue through October, and possibly until February 2021 when factories in Asia close for a week or two for the Lunar New Year, according to non-vessel-operating common carriers (NVOs) and liner executives. The 12 container terminal operators in Los Angeles-Long Beach have struggled with congestion as import containers backed up on the docks. Shortages of chassis, truck capacity and longshore labor needed to operate yard equipment have resulted in increased container dwell times on the docks.

“Most of the skilled shortages are tophandlers decking imports from the crane and feeding exports to the cranes,” McCorkle said.

SSA Marine has been especially affected by chassis shortages because of its operating model, which is based upon draying import containers to a near-dock storage yard as soon as they are discharged from the vessel.

“We’re to the point where we can’t work the ship properly because of the shortage of chassis,” DeNike said.

A part of a larger port investment

The new Gerald Desmond bridge is the first of several projects to be completed in Long Beach’s $4.5 billion capital investment program that will run to mid-decade. In addition to enhancing truck flow and cargo velocity, the bridge, with a height of 205 feet, will provide sufficient clearance for the 14,000-plus TEU capacity vessels that frequently call in Southern California to access terminals in the port’s inner harbor.

The third and final phase of the Long Beach Container Terminal (LBCT) expansion project, which will take the automated terminal to a build-out capacity of 3.5 million TEU a year, is scheduled for completion next year. LBCT consistently reports among the fastest truck turn times in the port complex of about 35 minutes, according to the Harbor Trucking Association.

Long Beach is scheduled in the next two years to add a second berth at the International Transportation Services terminal to accommodate two 14,000 TEU vessels simultaneously. The $870 million Pier B rail storage and staging port facility will reduce truck congestion in the harbor when it is completed by mid-decade, with each double-stack train replacing as many as 750 truck trips that would be required to move intermodal containers, according to the port.