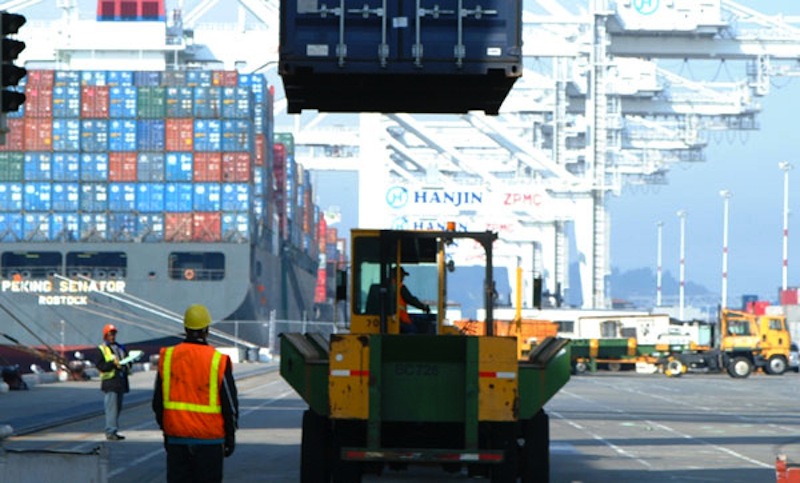 LONG BEACH, California — Critics of the five-year contract ratified in May by the International Longshore and Warehouse Union and the Pacific Maritime Association say the benefits were weighted heavily in favor of the union, but PMA President Jim McKenna says that wasn’t the case at all.

Citing measures to stop fraud in medical payments, a rebuilt arbitration system that should remove subjectivity in day-to-day rulings, an improved chassis-inspection protocol and prevention of “jurisdictional creep,” McKenna said the newcontract, which expires on July 1, 2019, is good for employers, workers, truckers and cargo interests that ship through West Coast ports.

In short, much of what’s in the new contract will promote efficiency at West Coast ports, and “there’s a lot not in there” that would have hurt productivity, he said.

Consider the so-called Cadillac tax in the Affordable Health-Care Act. The ILWU said it achieved its goal of “maintenance of benefits,” and that’s accurate, McKenna said. Employers, not the workers, will pay the tax that takes effect on Jan. 1, 2018, on medical plans that are paid 100 percent by the employers. The PMA’s exposure on the Cadillac tax will be about $180 million a year.

The PMA, however, is working with the ILWU to reduce fraud, and the effort is weeding out unethical doctors, surgery centers and chiropractors that provide services to longshoremen. The PMA has refused to pay a “staggering number of bills” and in the process eliminated about $250 million in fraudulent payments, McKenna said.

“The union is good with all of this,” he added, and the ILWU worked with employers to eliminate practices in which unethical medical practitioners overcharge longshoremen or charge for medical services that are never performed. This is especially true in the Los Angeles-Long Beach harbor community, which McKenna said is the “fraud capital of the United States” when it comes to medical abuse.

The bottom line, he said, is that the significant and permanent reduction in medical fraud will come close to covering the PMA’s absorption of the Cadillac tax in Obamacare, and may cover it completely.

The arbitration of union-management disagreements that occur hundreds of times during the life of a contract will look much different. For years, the ILWU nominated, and the PMA approved, the area arbitrators in Los Angeles-Long Beach and Seattle-Tacoma. The PMA nominated, and the ILWU approved, the area arbitrators in Oakland and Portland, Oregon. Considering that Southern California and the Puget Sound ports handle about 85 percent of the containerized cargo on the West Coast, it could be argued that the ILWU had the advantage in achieving favorable rulings.

If either side objects to the ruling, the complete three-person panel, including the neutral arbitrator, will handle the objection the next day. This process should prevent lengthy, costly work stoppages over minor disputes, McKenna said. When the full panel is asked to step in, the cases will likely involve policy-type issues with larger implications, such as manning requirements and the use of technology, he said. Furthermore, any decisions that are challenged even after the panels rule will be elevated to the coast arbitrator for a final ruling.

The new arbitration process and the new contract in general preserve the provisions of the ground-breaking 2002 and 2008 contracts that allow employers to use, at their discretion and without the ILWU being able to stop them, computer technology for the free flow of information and automated cargo-handling machines to modernize West Coast port operations.

During the negotiations the ILWU sought a number of provisions that would have significantly expanded the union’s jurisdiction or would have resulted in unnecessary manning and guarantees of payment for hours of work during which the longshoremen weren’t working. None of those provisions made it into the contract, McKenna said.

The controversial provision in the new contract granting authority to ILWU mechanics to inspect and if necessary repair trucker-leased chassis has risen to the forefront on the West Coast, and has implications for East Coast ports where the International Longshoremen’s Association has jurisdiction. McKenna said a closer look at the chassis-inspection provision shows it should greatly improve turn times for truckers.

In the past, ILWU mechanics would engage in a 10-point inspection of chassis before they left the terminals. During those inspections, the driver had to get out of the cab and the mechanic often would crawl under the chassis to check it out. Under the new contract, the driver remains in the cab and the ILWU mechanic does only a walk-around visual eight-point inspection of the chassis. McKenna said the new process should reduce from an average of six minutes to only one minute the time it takes to inspect each chassis.

Wake me when the ILWU