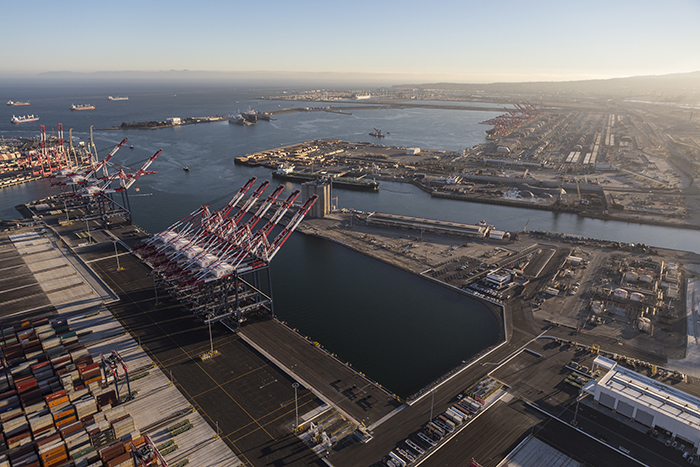 Cooperation is key to handling the ever-growing complexity of global supply chains and the operations they entail.

With plenty of terminal capacity, the ability of Los Angeles and Long Beach to efficiently handle the import surges coming their way from the new carrier alliances being launched on April 1 will depend upon the ability of everyone from marine terminals to beneficial cargo owners (BCOs) to synchronize their operations.

“There is ample crane and berth capacity,” Steven Rothberg, partner in Mercator International, told the annual Pulse of the Ports conference Wednesday in Long Beach. However, when the alliances on Saturday launch more than 20 weekly strings of vessels with an average capacity of about 9,000 twenty-foot-equivalent units (TEUs) to Los Angeles-Long Beach, they will encounter a complex port environment that will spread the vessel calls out over 13 container terminals and several modes of transport, he said.

When these vessel strings begin arriving in Southern California in mid-April, all sectors of the transportation supply chain, BCOs, shipping lines, terminal operators, intermodal equipment providers, truckers, and railroads, must be prepared to pre-plan and coordinate their supply-chain activities at a heightened level, he said.

Rothberg’s comments came as the three alliances — 2M, Ocean, and THE Alliance — were releasing details of the new vessel deployments that will begin to leave Asian ports on Saturday. This development marks the first time that global vessel-sharing alliances will begin operations on the same day, so all ports are in for a shock. However, Rothberg said Los Angeles-Long Beach, with 13 container terminals handling more than 15 million TEUs per year, will face challenges unmatched at other gateways.

The complexity of terminal operations in Southern California is compounded by the presence of four non-alliance lines. In addition to the three alliances, which account for more than 90 percent of vessel capacity in the trans-Pacific, the independent carriers all have weekly services, some with smaller vessels, but in the case of the new entrant SM Line, which replaced the bankrupt Hanjin Shipping, former Hanjin vessels of 6,600-TEU capacity will be deployed to Long Beach.

The Ocean Alliance of CMA CGM, Cosco Shipping, Evergreen, Line and Orient Overseas Container Line will operate nine weekly services from Asia to Los Angeles-Long Beach, and the vessel strings will call at two terminals in each of the ports, Rothberg said.

The 2M Alliance of Maersk Line and Mediterranean Shipping Co., with Hyundai Merchant Marine sharing space on those vessels, will have five weekly services spread out over terminals in both ports.The 2M Alliance is “opting for scale over sailing frequency,” with most of the ships of 10,000- to 15,000-TEU capacity, he said.

Ports such as Los Angeles and Long Beach have learned in recent years that handling vessels of this size, which generate container exchanges of 10,000 or greater during each vessel call, requires an aggressive marshalling of labor, equipment, truck and rail capacity each week, and therefore is more challenging than having twice as many vessel calls each week with ships that are one-half the size. The marine terminal therefore becomes a “source  of concern,” but it doesn’t mean there has to be congestion, Rothberg said.

Los Angeles and Long Beach, which two years ago established joint supply-chain optimization task forces to address issues of congestion, gate times, equipment availability and so forth, are registering improvements. For example, monthly truck visit times at many of the terminals as reported by the Harbor Trucking Association are gradually improving, said Alex Cherin, executive director of the intermodal conference of the California Trucking Association. Cherin attributed the improvements to “unprecedented collaboration” the past year among all of the port stakeholders. He added that a port productivity effort launched by the Federal Maritime Commission and a summit sponsored by the 13 terminal operators to explore options for improving the efficiency of the PierPass extended-gates operation, are likewise producing results.

Yes, and at some point in