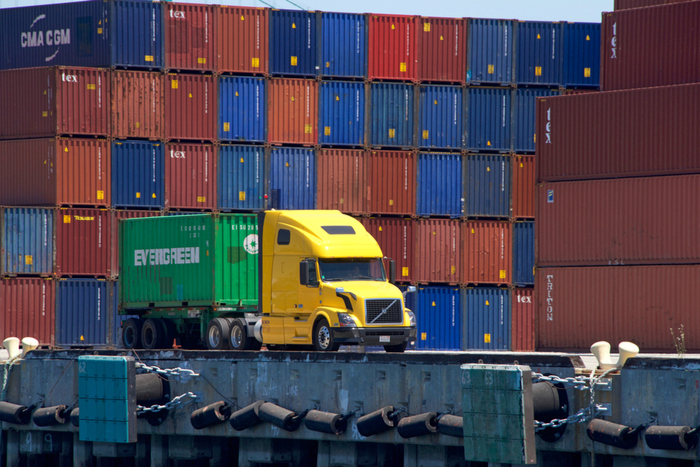 The ports of LA-LB expect to begin levying the $10 per TEU clean truck fund rate by the end of 2020. Photo credit: Shutterstock.com.

The ports of Los Angeles and Long Beach have pledged to work together to ensure that a new $10 per TEU clean-truck fee does not tempt cargo owners to divert shipments away from the largest North American container gateway, costing truckers business.

The ports expect to begin levying the fee, which they call the “clean truck fund rate” (CTF Rate), by the end of 2020. According to port staff, the CTF Rate is expected to generate $90 million in revenue during the first full year of collection. Proceeds from the fee, to be paid by beneficial cargo owners (BCOs), will be used to subsidize the purchase  of zero- and near-zero-emission vehicles by truckers.

“We got one swing at this, and it better be a good one,” Seroka said.

The port directors told the DrayTech meeting, which was sponsored by the Harbor Trucking Association, the ports will continue to emphasize to regulatory agencies and elected officials the importance of balancing the clean-air goals in the ports’ updated Clean Air Action Plan (CAAP) with the commercial realities of international commerce.

“We need (truckers) to amplify our voice,” Seroka said.

In addition to representing the needs of BCOs and truckers before the regulatory agencies, the ports are taking a united approach to fostering operational efficiencies through their joint port optimization task force. The effort to increase cargo velocity is intended to increase efficiency and thereby reduce costs in the gateway.

The ports are encouraging wider use of trucker appointments so terminals can better manage gate flow, and Seroka noted they are facilitating data sharing among importers, exporters, and truckers to foster more container matchbacks in the harbor.

In contrasting the ports’ efforts today with what they did when the clean-truck component of the CAAP was developed in 2006, Cordero noted that the ports have included truckers in the planning process for the CTF Rate from the beginning in order to ensure that the fee collection mechanism and other operational changes associated with the new fee do not increase turn times in the harbor.

Retailers already pushing back on fee

BCOs, not truckers, will pay the fee, Cordero noted. However, Seroka said retailers have made it clear that because of the pending fee, they will divert some traffic from Los Angeles-Long Beach, if for no other reason than to make a statement.

“Retailers have told us directly we will lose cargo,” Seroka said. Retailers will divert some shipments to other ports “just because they can,” he said.

According to a port document that accompanied the announcement of the harbor commissions’ adoption of the CTF Rate on Monday, the Southern California port complex’s share of US imports from Asia has dropped to 44.3 percent, from 55.7 percent in 2003.

With adoption of the $10-per-TEU CTF Rate on Monday, the next order of business for the port commissions will be to go out with a request for proposals to develop a collection mechanism and related software. The ports must also decide on a date when collections will begin. Near-zero and zero-emission trucks will be exempt from the fee.

Most of the trucker subsidies initially will go to purchasers of near-zero emission trucks, and when zero-emission trucks are judged to be commercially available, the subsidies will likely be confined to the purchase of electric and battery-powered vehicles, according to port staff.

LA-LB — the largest US port complex that handled more than 17 million TEU in 2019 — must comply with the mandate in the updated 2017 Clean Air Action Plan to achieve a zero-emission truck fleet by 2035. The mayors of the two cities have also confirmed they support that goal.

Given the high cost of near-zero — mostly natural gas-powered — and zero-emission trucks, the ports have determined that subsidies of about $100,000 per near-zero emission truck will be needed in the short term. The subsidies will have to be much higher when zero-emission battery-powered or electric trucks become commercially feasible for truckers, many of whom are owner-operators, to be able to afford the trucks.

The port directors said there are 17,000 drayage operators in the region, with about 7,000 of those considered to be frequent callers at the ports. The truckers today can purchase a used clean-diesel truck that meets the CAAP’s current standards for about $40,000. A new clean-diesel truck costs about $125,000, according to trucking company executives.

However, because the updated CAAP seeks to eliminate diesel trucks completely, new truck purchases will have to be natural-gas-powered trucks, at more than $200,000 each. Zero-emission trucks are being tested in drayage use, although they are not yet commercially feasible for large-scale purchases. Zero-emission trucks are expected to cost more than $300,000 each, according to manufacturers.

Even with large subsidies generated by the CTF Rate revenue, additional funding will be needed in the form of grants, the port directors said. Cordero and Seroka pledged to encourage the California Air Resources Board, the South Coast Air Quality Management District, and other state and federal agencies to develop grant programs for the purchase of near-zero and zero-emission trucks.

Rick Cameron, deputy executive director for planning and development at the Port of Long Beach, agreed that port-generated subsidies will not be sufficient if truckers are to afford the next generation of clean trucks. “It can’t be only the ports,” he said

Cameron noted that in addition to government grants for truck purchases, a regional effort will be required to develop a fueling infrastructure to serve the 1.8 billion square feet of industrial and distribution space in Southern California, with many warehouses located 60-100 miles from the ports. “We made that clear in the 2017 CAAP update,” he said.

It is still uncertain as to when zero-emission trucks will be commercially available.The ports believe that will happen around 2023-25, said Heather Tomley, managing director of planning and environmental affairs at the Port of Long Beach. Initially, most of the subsidies will be provided to truckers who purchase trucks powered by natural gas.

Also, infrastructure for fueling natural gas and electric trucks must be established in Southern California. Natural gas pumps are stationed at some trucking companies, and commercial natural gas fueling stations are scattered throughout the region. An extensive network of natural gas and eventually electric charging stations is needed, the ports said.

The ports are considering a “high-level summit” of truck manufacturers, truckers, BCOs, regulatory agencies and other stakeholders to provide guidance as to “what is available and when,” Cameron said.