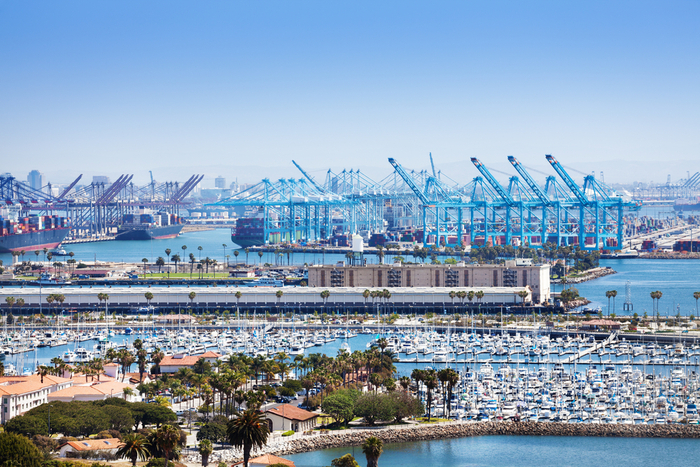 Aiming to reverse a 22 percent loss in market share over the past 18 years, the neighboring ports of Los Angeles and Long Beach have signed a memorandum of understanding (MOU) pledging to work together on programs designed to increase cargo velocity and security in the largest US port complex.

“In today’s competitive environment, where cargo owners have more choices, the ports of Long Beach and Los Angeles are stronger when working together, collaborating with all of our labor, industry, environmental, and community stakeholders,” said Bonnie Lowenthal, president of the Long Beach Harbor Commission.

Los Angeles-Long Beach competes primarily with ports along the US East and Gulf coasts for import cargo from Asia. The volume of the port complex’s laden imports from Asia last year fell 5.8 percent from 2018, while its market share of US imports from Asia declined to 23.2 percent, from 23.9 percent in 2018 and 24.5 percent in 2015, according to PIERS, a JOC.com sister company within IHS Markit.

When total US imports and exports on all trade lanes are measured, Los Angeles-Long Beach has lost 22 percent market share since 2002, according to Gene Seroka, executive director of the Port of Los Angeles. The bleed of cargo from the US West Coast began following the contentious contract negotiations that year between the Pacific Maritime Association and the International Longshore and Warehouse Union, which involved a 10-day shutdown of the ports.

More recently, though, Los Angeles and Long Beach have focused on the use of data sharing among all stakeholders to identify productivity issues at marine terminals. The MOU will address those productivity issues directly as the ports collaborate on cargo transfer predictability, digital connectivity, and using metrics to uncover areas where delays occur. In today’s digital age, the ports are encouraging their stakeholders to share data through information portals.

Although they are two independent port authorities, Los Angeles and Long Beach have been collaborating since development of the Alameda Corridor in the mid-1990s, which enhanced the movement of intermodal trains from the harbor to the transcontinental rail network. Other examples of collaboration include the ports’ joint Clean Air Action Plan of 2006 and clean-trucks program in 2007.

The ports intend to move beyond those efforts to cooperate on productivity-enhancing measures in the modern digital era. Their first step will be to establish a work plan that will prioritize efforts, create work groups, and define objectives for each of the areas outlined in the MOU. Those efforts will include participation from terminal operators, labor, the drayage industry, railroads, shipping lines, and beneficial cargo owners (BCOs).

By including industry stakeholders in the effort, “both ports and our stakeholders will be better prepared for the challenges ahead,” said Jaime Lee, president of the Los Angeles Harbor Commission.