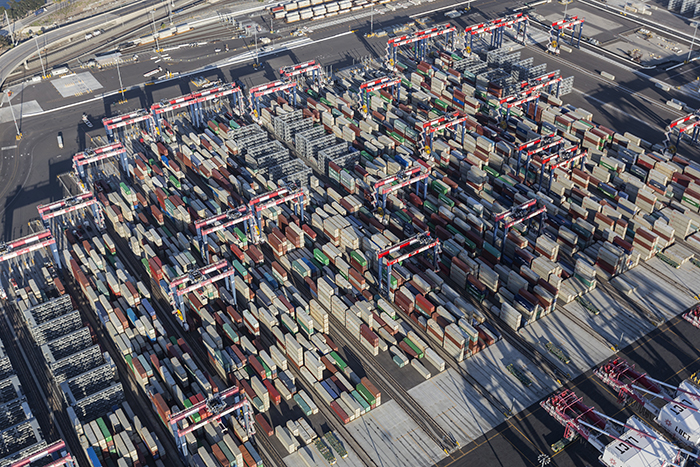 Imports at the ports of Los Angeles and Long Beach increased 9.3 percent year over year in September, 16.6 percent in October, 8.4 percent in November, 21.8 percent in December, and 4.8 percent in January, according to PIERS. Photo credit: Shutterstock.com.

Truck turn times, container dwell times, and chassis availability are steadily improving in the ports of Los Angeles and Long Beach, but a surplus of empty containers awaiting return to Asia remains a drag on productivity at the largest US port complex.

“Imports are down. Our dwell time is less than three days, but the empty level is still very high,” Daniel Bergman, vice president of Long Beach operations at Total Terminals International, told JOC.com this week.

Los Angeles-Long Beach suffered through truck visit times of 90 minutes or longer and container dwell times in excess of four days in late 2018 and early 2019, when retailers and manufacturers front-loaded imports to escape threatened Trump administration tariffs of 25 percent on imports from China. By comparison, truck turn times were consistently below 80 minutes and container dwell times were less than three days during the spring and early summer months last year.

The tariff deadline was delayed from Jan. 1 to March 1 and has yet to take effect as negotiations in the US-China trade war continue. Meanwhile, the import surge dissipated in February, with US containerized imports from China declining 6.9 percent compared with February 2018, according to PIERS, a JOC.com sister product within IHS Markit. With the drop in imports, truck visit times at the 12 container terminals in Los Angeles-Long Beach have steadily improved, according to the Harbor Trucking Association. The average turn time in March was 83 minutes, down from 98 minutes in January and 90 minutes in February.

Container dwell time surged to 4.32 days in January but dropped in February to 3.2 days, according to the Pacific Merchant Shipping Association (PMSA). Terminal operators view dwell times above three days as an indicator of congestion. As containers sit for days at the terminals, they generate multiple moves within the facilities, contributing to congestion and increasing terminal operators’ costs. The PMSA dwell time numbers for March have yet to be released, but anecdotally, individual terminal operators are reporting dwells of less than three days.

The main cause of congestion in Los Angeles-Long Beach was an especially strong peak season last summer and early autumn, and unusually robust imports in November and December, which are usually slow months. Imports increased 9.3 percent year over year in September, 16.6 percent in October, 8.4 percent in November, 21.8 percent in December, and 4.8 percent in January, according to PIERS.

In order to handle the surging imports, carriers in the trans-Pacific deployed several dozen extra-loaders, vessels not associated with a regular liner service. However, many of the extra-loaders “didn’t stick around to pick up empties,” Bergman said. Terminal operators responded by rationing the return of empty containers, which reduced congestion within the terminals but caused empties to pile up at warehouses and truckers’ yards. The problem was compounded in February and March, when carriers blanked more than 30 sailings because imports from Asia plummeted during the post-Lunar New Year lull.

Terminal operators say vessel arrivals in April are back on schedule. “The vessel pro formas have returned to normal,” said John Ochs, senior director of regulatory affairs at APM Terminals in Los Angeles. “There is a slight excess of empties at APM,” he added, while noting that truck turn times and chassis availability have improved.

Chassis availability has returned to normal throughout the harbor, said Ron Joseph, executive vice president and chief operating officer at Direct ChassisLink, Inc. (DCLI). The Pool of Pools website maintained by the three major equipment providers in Southern California — DCLI, Flexi-Van Leasing, and TRAC Intermodal — lists a total of 41,000 chassis this week spread out over the 12 container terminals. That’s 124 percent of the amount requested, Joseph said. The street dwell time for chassis currently stands at 4.3 days, down from an average of 5.7 days in March and a high of seven days earlier this year, he said.

However, terminal operators and chassis providers continue to struggle with chassis dislocations, with terminals fluctuating between having too many chassis on some days and not enough on other days. The problem, according to both equipment providers and terminal operators, is that under the carriers’ vessel-sharing alliances, loaded import containers often enter through one terminal, but the container and chassis are returned to a different terminal after the container has been unloaded at a local warehouse. According to the Pool of Pools website, of the 185,803 chassis trips in early April, 100,557 of the chassis were returned to a terminal other than where the inbound container/chassis trip originated. “This changes literally ship by ship and shift by shift,” Ochs said.

The improved metrics for truck turn times, container dwell times, and chassis availability are corroborated by logistics providers in Southern California. “That’s what we’ve seen,” said Scott Weiss, vice president of  business development at Port Logistics Group. Weiss said he checked with three other trucking and warehouse providers, all of whom confirmed that the congestion problems were generally dissipating.

“It’s time to take a breath, catch up and prepare for the next wave of volume,” he said. The next spike in imports will occur around mid-May with the beginning of the back-to-school shipments. “That will be the next acid test,” Weiss said.