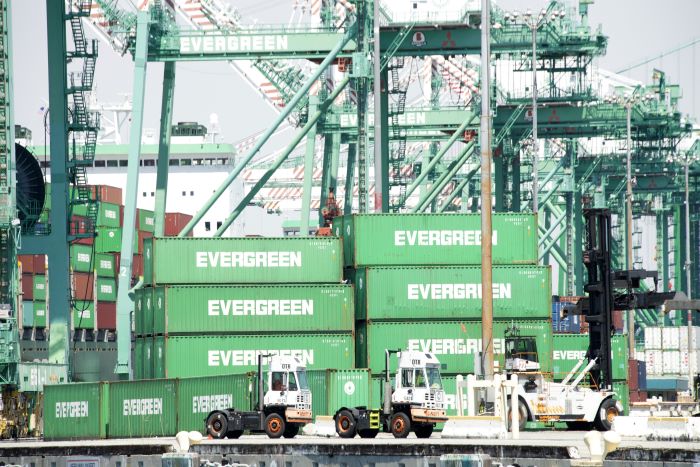 The move toward zero-emission trucks is an important step for other North American ports that are also being pressured by local regulators to reduce harmful diesel emissions. Photo credit: Shutterstock.com.

The ports of Los Angeles and Long Beach are weighing the implications of implementing a new fee ranging between $5 to $70 per TEU on loaded containers, the proceeds of which would be used to help subsidize the purchase of near-zero emission trucks by drayage operators.

While port officials are sensitive to the added costs to beneficial cargo owners (BCOs), they want to ensure the fee won’t cause significant cargo diversion should shippers shift product to other ports to avoid the new LA-LB charge.

A much-anticipated draft economic analysis released this week by the ports suggested the most prudent approach is to begin with the lowest possible fee needed to subsidize initial purchases of near-zero emission (NZE) trucks, rather than start too high and create permanent damage. The new fee would be known as the clean truck fund (CTF) rate.

“A low CTF rate that is shown to have no competitive impact on the ports could safely be incrementally raised,” the report stated. “Conversely, it may be impossible to undo the damage of a CTF rate that is initially set too high.”

The analysis concluded that a fee of $35 to $50 per TEU would generate enough revenue to adequately subsidize drayage operators so they can afford to purchase NZE trucks, and eventually zero-emission (ZE) battery and plug-in electric trucks when they become commercially available.

NZE trucks certified by the California Air Resources Board (CARB) will be exempt from the fee; only BCOs who contract with drayage operators with non-compliant trucks will pay the fee.

The ports will receive comments on the fee and its impacts from the industry in January. The respective harbor commissions will decide what the clean truck rate will be later in the year; it would take effect around the end of 2020.

“We want to understand what setting the rate will do to our competitiveness,” Rick Cameron, deputy executive director of planning and development at the Port of Long Beach, told JOC.com. “We are not taking this lightly. We are taking it very seriously.”

Southern California’s push for near-zero and, eventually, zero-emission trucks is an important development for North American ports that are being pressured by regulators to reduce harmful diesel emissions from port operations. Just as an earlier fee in 2009-11 charged on dirty-diesel trucks began a national move by other gateways to transition away from high-polluting diesel trucks, this latest initiative is expected to shift the drayage industry toward alternative fuel and electric trucks.

The ports anticipate that truckers looking to replace aging vehicles will be incentivized by a large subsidy to immediately transition to near-zero emission trucks. According to the ports’ joint draft report released Tuesday, most truckers would be unable to afford NZE vehicles unless they receive a subsidy. NZE trucks — most likely those that operate on alternative fuels such as liquefied natural gas — cost about $250,000 each, compared with about $125,000 for a diesel truck, according to the report.

Zero-emission battery and plug-in electrical trucks capable of performing duty cycles in the harbor environment are being tested right now. They cost about $320,000 each, according to the report. The ports’ joint Clean Air Action Plan (CAAP), which was updated in 2017, calls for zero-emission trucks by 2035.

“Newer trucks, especially NZE and ZE technology trucks, will only be competitive with the incumbent fleet if their purchase is subsidized,” the report stated.

In order to encourage manufacturers to price their trucks competitively, the ports are attempting to generate a critical mass of new NZE and eventually ZE trucks by subsidizing drayage operators so they can order larger volumes of trucks. “We want to be a market maker,” Gene Seroka, executive director of the Port of Los Angeles, told the Harbor Transportation Club Thursday.

The ports are requesting that comments from stakeholders on the Clean Truck Rate Draft Economic Study be submitted in writing by Jan. 31, 2020. Cameron said the ports in the coming month will hold a series of meetings in order to solicit comments from BCOs, truckers, and other stakeholders to learn how adoption of near-zero emission requirements, and the fees attached to non-compliant trucks, would impact their operations. In the case of BCOs, the ports want to learn about the likelihood of cargo diversion once the fees are implemented.

Interviews with port users revealed an overriding concern that any increase in the cost of operating in Los Angeles-Long Beach could lead to further diversion of discretionary cargo to competing ports on the East and Gulf coasts and Western Canada. The Los Angeles-Long Beach share of US imports from the Pacific Rim has declined from 55.7 percent in 2003 to 44.3 percent in 2018, according to the report.

Before the ports can begin subsidizing the purchase of NZE trucks, they must wait for CARB to define exactly what a near-zero emission truck is. Cameron said that could happen by April.

“There is no definition of near-zero emission trucks. This is a blind spot for truckers,” said Weston LaBar, CEO of the Harbor Trucking Association.

“There are a ton of questions,” said Jonathan Gold, vice president of supply chain and customs policy at the National Retail Federation. “More consultation with the industry is needed.”

The ports know that the 2006 CAAP significantly reduced truck emissions, and subsidies granted to truckers in 2009-2011 were effective in expediting the adoption of cleaner diesel vehicles. The original clean-truck program required the use of 2007 or newer model engines and included subsidies that were partially funded by a fee of $35 per TEU on non-compliant trucks beginning in 2009. Two years later, the entire drayage fleet in Southern California had been converted to the cleanest trucks available at the time.

According to the ports’ 2018 emissions inventories, truck emissions from the baseline year of 2005 have been reduced by 97 percent for diesel particulate matter, 78 percent for nitrogen oxides, and 92 percent for sulfur oxides.

However, today’s trucking environment is much different than 10 years ago when truckers simply shifted from old trucks burning dirty diesel fuel to more efficient newer-model trucks burning cleaner diesel. Furthermore, drayage operators at that time had access to hundreds of cleaner 2007-model vehicles from long-haul truckers on the used market. The used trucks were snapped up by drayage operators for prices as low as $2,000 to $3,000 each. Most NZE and ZE trucks today must be purchased new.

Another complicating factor these days is that drayage companies are no longer purchasing new trucks and leasing them to owner-operator drivers as they did 10 years ago. The Teamsters union, which has been trying to organize drivers in Southern California and in the Port of New York-New Jersey, has used the lease arrangements to build their case that owner-operators who lease trucks from drayage companies should be classified as employee drivers, which would make it possible for the drivers to be unionized.

The draft economic report also highlights the increasingly competitive environment West Coast ports have faced since the widening of the Panama Canal in 2016, and the shifting production from China to Southeast Asia due to the United States-China trade war, and how these developments favor East and Gulf coast ports.

Any additional costs of doing business in California can have a serious impact on exporters of lower-value commodities, such as agricultural products. Peter Friedmann, executive director of the Agriculture Transportation Coalition, said the ports should focus on the cumulative impact of new clean-truck fees, the high costs of shipping agricultural products by rail to the West Coast, and other charges in Los Angeles-Long Beach, such as the PierPass traffic mitigation fees.

Gold noted that although fees may start out relatively small, they usually increase over time to meet increased expenses. “Any fee builds and grows. Where’s the oversight in this plan?” he said.