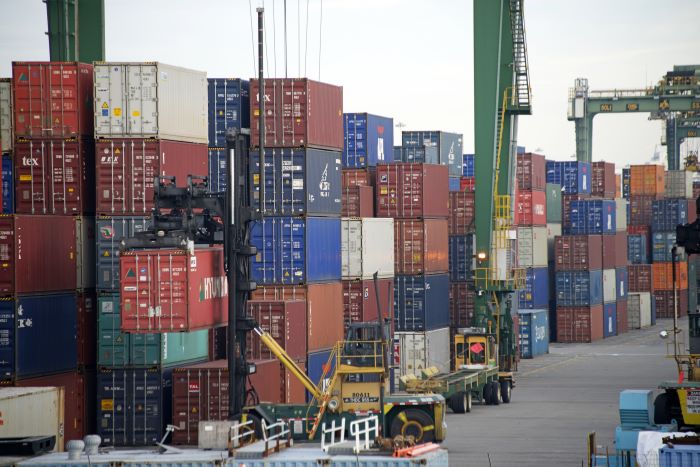 Truck turn times at the Port of Oakland have increased over the past two months, fueled by growing import volumes. Photo credit: Shutterstock.com.

The import surge that produced chassis shortages, declining productivity at warehouses, and elevated gate times in Southern California over the past month is spawning similar problems in Oakland, according to drayage operators.

Truckers report spot shortages of chassis at marine terminals there as chassis dwell times increase at local warehouses. Productivity at warehouses and distribution centers is down because fewer workers are being deployed for social-distancing purposes during the coronavirus disease 2019 (COVID-19).

Truck turn times at the Port of Oakland have increased in the past two months, fueled by growing import volumes. The laden import volume in July was 96,420 TEU, up from 82,464 TEU in June and 73,423 TEU in May, according to the port’s website.

The average truck visit time at Oakland’s four container terminals in July was 97 minutes. That’s up from 86 minutes in June and 89 minutes in May, according to the Harbor Trucking Association.

A frustrating aspect of the cargo surge is that chassis shortages and gate times vary from day to day and terminal to terminal based on vessel arrivals and departures. That can result in chassis being plentiful one day at a terminal where export containers have been unloaded for a vessel that is getting ready to depart, but scarce at another terminal where laden import containers overwhelm the chassis available at that facility.

“There’s a big ebb and flow to it,” said Brandon Taylor, director of transportation at the logistics provider GSC Logistics. “There aren’t consistent shortages.”

Unlike Los Angeles-Long Beach, which is primarily an import gateway dominated by 40-foot containers, Oakland’s imports and exports are split about 50-50, said Peter Schneider, vice president of TGS Transportation. Exports, which are predominantly agricultural commodities from California’s Central Valley, move mostly in 20-foot containers because of their heavier weight. Exports of a variety of fruits and nuts are beginning to pick up with the summer-fall harvest, and this will soon stress the availability of 20-foot containers and chassis, he said.

The cargo surge and equipment dislocations are contributing to longer lines at Oakland’s marine terminal gates, and that is reducing driver productivity and earnings, Taylor said. Drivers are paid by the load. “Some customers will pay wait time. Some don’t,” he said.

Cargo volumes at the Northern California port are also increasing because some containers carrying e-commerce shipments for Amazon and other online retailers are being diverted from Southern California because of congestion at warehouses there, Taylor said. “It’s just starting to raise its head in Oakland,” he said.

Truckers in Oakland do not expect the equipment shortages to rival those in Los Angeles-Long Beach, which has 12 container terminals spread out over two ports, because the terminal situation in Northern California is easier to manage.

However, Schneider said the strong import volumes, which are expected to continue at least through August, when compounded by growing export volumes, could exacerbate equipment imbalances and cause wait times at the terminals to get worse.

“The lines at the terminals last week were awful,” he said.

Global Shipping Outlook: A Sneak Peek at 2021
Port Performance North America: Managing Cargo Flow During a Pandemic — and Beyond
END_OF_DOCUMENT_TOKEN_TO_BE_REPLACED