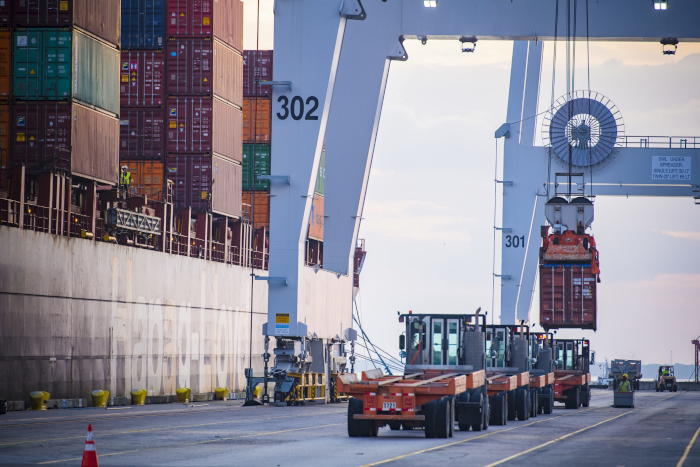 The Port of Houston will receive $79.4 million in federal money as part of an ongoing upgrade that will allow it to handle vessels up to 18,000 TEU.

The US Department of Transportation said the Port of Houston Authority will receive the grant as part of the just-announced round of awards under the Infrastructure for Rebuilding America (INFRA) program. In total, INFRA handed out $906 million in grants in the latest round.

The new award will go to improvements at the Barbours Cut Terminal, the smaller of Port Houston’s two container terminals.

The money will go to restoring 2,700 linear feet of wharf and upgrading 84 acres of yard space at Barbours Cut. The terminal currently has 6,000 feet of continuous wharf and 230 acres of paved area. Construction could begin in late 2021, but more likely in 2022, the port said.

Houston is upgrading Barbours Cut and the Bayport Container Terminal to handle larger ships. Barbours Cut is also getting ship-to-shore cranes that can handle vessels up to 10,000 TEU, replacing cranes that could handle 5,000 TEU vessels. Other upgrades include light and yard improvements and new rubber-tire gantry cranes.

The 376-acre Bayport terminal received a Department of Transportation grant for $22 million in February to build a new wharf. Bayport is also replacing its crane fleet with ones that can handle 18,000 TEU ships.

With the upgrades, Houston’s terminal capacity now sits close to 3 million TEU, up from 1.2 million TEU five years ago.

Now the next round of upgrades will happen on the waterside. Vessels that call on the port currently have an average capacity of 8,500 TEU range due to its 45-feet draft and the narrowness of the ship channel that leads from Galveston Bay.

But with Houston’s petrochemical industry looking for global outlets for resin production, the port is undertaking a major project aimed at allowing bigger ships to transit. In April, the US Army Corps of Engineers recommended that Congress authorize funds for widening the Houston Ship Channel to 700 feet from its current 455-foot width. The Port of Houston Authority also plans to begin dredging in 2021.