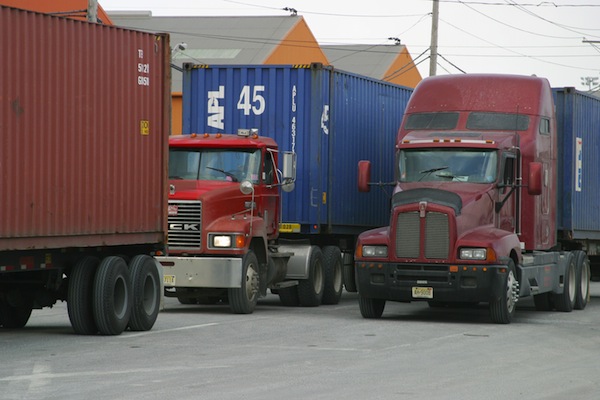 Skirmishes are popping up from coast to coast in the battle over whether port drayage owner-operators should be classified as independent contractors or company employees.

Business groups faced off against the Teamsters union and its allies this month at a New Jersey hearing on legislation placing the burden on motor carriers to prove that their drivers are independent contractors.

A New Jersey Assembly committee voted 3-2 this month to place the burden on motor carriers to prove their drivers are independent contractors who are ineligible to unionize. Business groups hope to block or amend the bill as it moves through the legislative process.

New Jersey is one of several states where Teamsters-backed legislation has been introduced to reclassify owner-operators as employees. Bills also are pending in California, Washington and New York. Rep. Jerrold Nadler, D-N.Y., has introduced federal legislation. In addition, several lawsuits allege misclassification by individual trucking companies.

These efforts come as the Supreme Court prepares to hear arguments on an appeals court’s rejection of the Port of Los Angeles’ requirement that port drayage drivers be company employees.

The requirement was part of a port program to reduce air pollution by encouraging replacement of older trucks. The American Trucking Associations said the provision violates federal law that pre-empts any state or local measure “related to the price, route or service of any motor carrier.”

The New Jersey legislation would create the presumption that owner-operators are employees unless the company can prove (a) the driver has control and discretion over his services, (b) the service is separate from the employer’s usual business or location, and (c) the operator is customarily engaged in an independent business.

In addition to this so-called ABC test, the bill would allow unions or others to file class-action lawsuits against companies for alleged misclassification. Business officials say this would provide unions with enforcement rights generally reserved for government entities, and allow them to use lawsuits as an organizing tool.

“A business environment where port drayage drivers are likely to spend more time in the courtroom than behind the wheel hauling cargo into the marketplace will not be viewed as favorable … by key logistical decision-makers,” testified James Cobb, director of governmental affairs at the New York Shipping Association.

Cobb said the proposed legislation would place the Port of New York and New Jersey “at a severe competitive disadvantage. It has already begun to create an unhealthy suspicion among ocean carriers and their customers, cargo shippers, regarding the future business climate in the state of New Jersey.”

Supporters of the legislation said it would prevent companies from shortchanging workers and gaining an unfair edge over competitors that hire employee drivers and pay workers’ compensation and unemployment compensation.

“Misclassification is rampant in the trucking industry, where there are more than a few bad actors,” said Fred Potter, Teamsters international vice president. “This bill will help these workers seek justice, and put the burden on the employers, where it should be. They should be able to justify their business model.”

Representatives of the New Jersey Motor Truck Association and other business groups said most owner-operators want the freedom to operate independently and work when they want to work. “Maybe they have kids who are in school, and want to be home by 3 and watch them play football or kickball or go to a science fair,” said Gail Toth, the state trucking association’s executive director.

For owner-operators wishing to be classified as an employee, “there are many job openings for company drivers throughout New Jersey. Just go on Google, Craigslist or any of the local newspapers,” Toth said.

The trucking association doesn’t support companies violating the law on classification, but that unlike employees, owner-operators must pay business taxes and state and federal taxes on their vehicles, she said. “I don’t know anybody out there who is going to pay these taxes if they think they are employees,” Toth said. “This is insane. If you want to be an employee, go to work for an employer and be an employer and get all the benefits.”