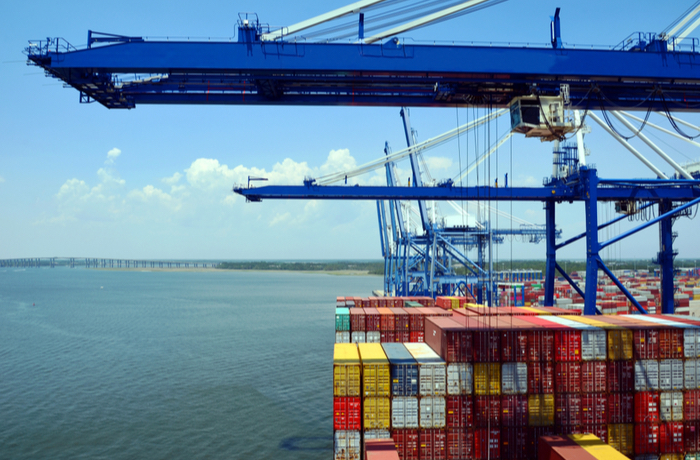 Charleston (pictured), Halifax, Philadelphia, and Boston are among some of the East Coast ports that have boosted connectivity. Photo credit: Shutterstock.com.

In a world where so-called connectivity is increasingly understood in the context of computer networks and the flow of information and data, it is easy to lose track of the fundamental physical tenets of connectivity. Yet this is exactly where part of the competition for the future supply chains are already beginning to play out — especially as the US East Coast ports have increased their connectivity by 28 percent after the widening of the Panama Canal versus an 8 percent improvement on the West Coast.

The competitiveness of a container port clearly depends on a variety of parameters such as price, access to inland transportation options, physical storage space, etc. No single parameter on its own determines the success or failure of a port, but they each play a part. One of these elements is the connectivity to regular shipping services.

Measuring such connectivity can be done in many ways and, realistically, each port will have a slightly different position in the market, so a one-size-fits-all comparison across all ports globally is not meaningful. However, the more a group of ports is competing for the same cargo and customers, the more likely it is that a common measure provides a meaningful comparison.

One such measurement, the liner shipping connectivity index, is provided by the United Nations Conference on Trade and Development (UNCTAD). It is available at port level for more than 900 ports globally in the period from 2006 to 2019. The key elements included in the index are the number of scheduled services to a port, the capacity of the vessels in question, the number of other ports directly connected with a regular service to the port in question, and the number of liner shipping companies offering services to the port.

As mentioned, it is not meaningful to compare the index across very disparate ports. Comparing, for example, Charleston, South Carolina, to Salalah, Oman, is meaningless as the service requirements to a port predominantly focused on captive import/export cargo is vastly different from a port predominantly focused on providing transshipment operations between deep-sea and regional feeder services.

However, one interesting approach is to take a closer look purely at the North American ports. Essentially, these are all predominantly ports designed to handle import/export cargo to the United States and Canadian markets, with the US market being the bulk of the volume. Due to the Jones Act, transshipment patterns do not come into play in the same way as key ports in Europe and Asia.

The UNCTAD database includes 89 ports in the US and Canada, although many of the smaller ports clearly have not had regular services throughout the entire period. Reducing the dataset to the 30 most important ports that had the highest degree of connectivity in the full period since 2006, several interesting patterns emerge.

The first and most obvious question is whether we have seen any ports “lose” the competitive battle in terms of providing connectivity across the ocean. In this case, Portland, Oregon, emerges as the only top-30 port which has, in essence, been removed from the competitive landscape. This culminated in 2016 where Hanjin initially pulled out, followed shortly thereafter by Hapag-Lloyd. Some degree of connectivity was left due to service from Westwood, but this was also subsequently pulled. A few services have since been off and on in Portland.

While a range of reasons lie underneath this development, it serves as an example of the self-reinforcing mechanism at play in relation to connectivity in ports. If connectivity to a port is reduced, cargo owners see their supply-chain options being reduced, as well. All else equal, this is likely to shift part of the volume elsewhere. Reduction in volume will prompt the shipping lines to reduce their service, further reducing connectivity. A negative feedback mechanism is in place. In the case of Portland, the connectivity index had been slowly but inexorably declining through the period from 2006 to 2014, only to drop sharply in 2015 and then collapse in 2016.

However, we see most ports continuously increase connectivity — which, from a competitive perspective, means that the few ports that are not increasing connectivity are getting behind in terms of relative competitiveness. Among the top-30 ports, this applies to Dutch Harbor, Alaska; Camden, New Jersey; Portsmouth, New Hampshire; Port Everglades, Florida; and Wilmington, Delaware. Hence, purely from a connectivity perspective, these are the ports where long-term concern can be raised — however, Dutch Harbor is located in such a unique location that a straight comparison to the other ports is not necessarily meaningful.

This leaves us with the main ports on the West, East, and Gulf coasts. These have all seen connectivity increase over the past decade, but way this has happened is quite different — especially when we consider the impact of the opening of the new set of locks in the Panama Canal in 2016.

To compare the situation before and after the wider Panama Canal, it is instructive to compare the average connectivity in the three years prior to 2016 with the three years after. When we make this “before-and-after” comparison, it is found that the West Coast ports have, on average, increased their connectivity by 8 percent. During the same period, the East Coast ports have increased their connectivity by as much as 28 percent on average. This is especially driven by substantial connectivity improvements in Charleston, Halifax, Philadelphia and Boston. Connectivity to the Gulf Coast has, on average, improved 10 percent with Mobile, Alabama, and New Orleans, Louisiana, being the key drivers.

Clearly, cargo destined to California, for example, would rarely be discharged in Charleston and vice versa. However, the interesting part is the supply chain solutions for inland cargo. The strong increases in connectivity in the East Coast ports means that they — relatively speaking — are improving their competitive positioning versus both the Gulf and West Coast ports. This means the emergence of more choice for the cargo owners, which could prompt more East Coast routing — and more volume would bring in more services and/or larger vessels in turn improving connectivity. And, as opposed to Portland, create a positive feedback loop generating additional East Coast volume growth at the expense of the West and Gulf Coast ports.

This also heats up the competition between the East Coast ports themselves, where not everyone is seeing strong connectivity increases. Falling behind on connectivity for the import/export cargo can easily trigger the negative feedback loop, eventually leading to elimination of the regular liner services. Based on the pre- and post-Panama expansion data, the East Coast ports most at risk in this scenario are Port Everglades, Baltimore, and Montreal.

As mentioned initially, connectivity is a complex concept and there is not a true one-size-fits-all measure. Ideally, each port should look closely at how both cargo owners and carriers use their ports, as well as nearby competing ports, to understand the full dynamics. However, the UNCTAD measure provides a 50,000-foot overview clearly identifying the East Coast ports as boosting their competitiveness versus the West Coast and some ports do face a genuine risk of losing all liner coverage.

A complex set of issues, but

Permalink Submitted by ferrullig@minds... on Sep 30, 2019 11:46AM EDT
A complex set of issues, but as global trade grows, big gets bigger, population centers get bigger, and Portland, OR has no service due to the ILWU.

Thank you for the insightful