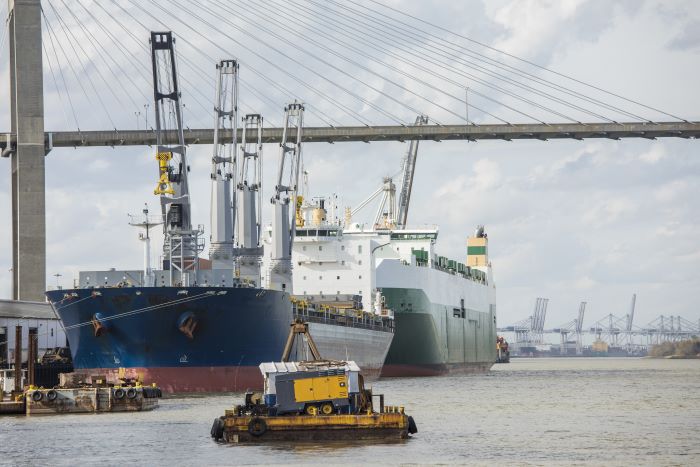 Ports like Savannah, Georgia, (above) have benefited from the cargo bleed from ports on the US West Coast amid the US-China trade war. Photo credit: Shutterstock.com.

US East and Gulf coast ports grabbed an increasing share of rapidly slowing imports from Asia in the first 10 months of 2019, reflecting their geographic advantage in serving the Southeast Asian markets as production shifts from China during the United States-China trade war.

West Coast ports, which are highly dependent upon China for their Asian imports, experienced a 9.2 percent decline in imports from China, and a 3.2 percent decline in imports from all of Asia in January-October, according to PIERS, a JOC.com sister company within IHS Markit. East Coast volumes increased 5 percent in January-October year over year, and volumes at Gulf Coast ports increased 17.4 percent, while West Coast imports declined 3.2 percent.

“We started to see this shift taking place earlier in the year,” said Steve Rothberg, partner at Mercator International. He added, though, that the shift in production in Asia that is driving some of the growth at East Coast ports will vary by product. Some manufacturing can be moved relatively quickly to developing economies in Southeast Asia, but it will take time to move production of more sophisticated manufacturing processes from China, he said.

Los Angeles-Long Beach, which accounts for 46.5 percent of total US imports from Asia, experienced a 4.6 percent decline in imports in January-October. The Southern California port complex handles 47.4 percent of US imports from China, and its volume from China declined 10.3 percent during that period.

Several factors have contributed to the growing Asia import volumes to the East and Gulf coasts. The West Coast’s dominant market share in the largest and most competitive US trade lane began to erode after the contentious 2002 West Coast contract negotiations between the International Longshore and Warehouse Union (ILWU) and the Pacific Maritime Association (PMA), which represents employers. Following the ILWU work slowdowns and employers’ lockout of longshore workers, national retailers rapidly expanded their logistics supply chains and located import distribution centers on the East and Gulf coasts in a “four-corners” supply chain strategy.

As the West Coast market share steadily declined, East and Gulf coast ports benefited from the widening of the Panama Canal in 2016 and the raising of the height of the Bayonne Bridge in New Jersey in 2017. That allowed vessels up to 14,000 TEU capacity, almost three times the former capacity limitation of 5,000-TEU ships, to transit the Panama Canal. More recently, the shift of production to Southeast Asia has increased the competitiveness of all-water services from that region to the East Coast via the Suez Canal. Shipments originating west of Singapore can compete with both the all-water Panama Canal services and the trans-Pacific route to the West Coast on both transit times and cost.

Industry analysts say that although US imports from Asia will continue to show year-over-year declines in the coming months, West Coast ports will take a bigger hit than East and Gulf coast ports. “North American East coast ports continued to be largely unaffected by the ongoing US-China trade war,” Alan Murphy, CEO of Sea-Intelligence Maritime Consulting, said in this week’s Sunday Spotlight. He added, though, “We are starting to see a trend of decreasing year-over-year growth rates in the 2017-19 period.”

If the US-China trade war continues into 2020, the entire Pacific Rim will experience declining growth in trade, said Paul Bingham, director of transportation consulting at IHS Markit. “There is a general slowdown in the Asian economies because those other countries depend upon the US-China trade, which has weakened,” he said.

The steady growth of production in Southeast Asia will foster increased cargo volumes in all-water services to the East Coast through both the Panama and Suez routes, Bingham said. Carriers tend to promote their all-water services to the East and Gulf coasts because they capture most of the revenue, whereas West Coast services include a large intermodal rail component. “Intermodal doesn’t work as well for the carriers,” he said.

Additionally, as carriers continue to order larger vessels and increase the size of their fleets, the longer all-water routing via the Suez Canal provides a profitable outlet for that capacity. “When a carrier is trying to absorb capacity, they take it through the Suez,” said Lawrence Burns, senior vice president of trade and sales at HMM.

The long-term impact of the US-China trade war is still unfolding as negotiations between the two countries continue. Bingham noted that it will take years for other Asian countries to increase their capacity, whereas China right now has over-capacity that can quickly be called back into production if the trade war is ended.

“The workers and buildings didn’t move out of China, so there’s a lot of unused capacity in China,” he said.