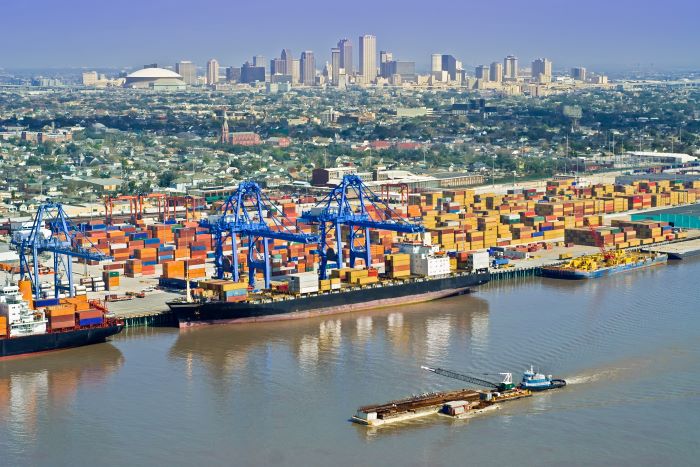 The US Army Corps of Engineers (USACE) has taken the first steps to deepen a 256-mile stretch of the Mississippi River from 45 feet to 50 feet, a move that will allow the Port of New Orleans to receive ships larger than the 10,000 TEU limit in place now.

The project parallels other navigational projects at the ports of Mobile and Houston, setting the stage for container lines to deploy larger vessels calling Gulf ports as resin exports build and more imports are routed through the region rather than through the US West Coast.

The Corps and the state of Louisiana signed an agreement for the $250 million project on Friday. Louisiana’s Department of Transportation and the Corps plan to issue contracts for the dredging work in the fall.

The Port of New Orleans hopes to see the first phase of the project completed by early 2022, with a second phase by 2024.

The federal government will provide 75 percent of the funding, with the state picking up the remainder.

The deepening will allow vessels that can use the Panama Canal’s wider locks, which can accommodate ships of 14,000 TEU capacity, to navigate the Mississippi up to Baton Rouge.

Currently, the Port of New Orleans can handle ships up to 10,000 TEU, the largest size that can call on any port along the Gulf of Mexico.

The deepening project adds New Orleans to the list of Gulf Coast ports looking to service larger ships that can transit the Canal’s wider locks.

In April, USACE signed off on a report that would authorize funding for widening and deepening the Houston ship channel to accommodate 14,000 TEU vessels. The Port of Mobile is also expected to begin a dredging project later this year that will bring its ship channel depth from 45 feet to 50 feet so it can handle similar-size ships.

USACE estimates the New Orleans project will provide $124 million per year in net economic benefits as shippers will load more cargo on vessels. The Port of New Orleans said that the extra five feet of depth will translate to approximately $5 million worth of additional cargo per vessel.

The first phase of the project will cover a portion of the Mississippi, known as the Southwest Pass, between the Gulf of Mexico and New Orleans. Concurrent with the Southwest Pass deepening, several utility pipelines that cross the river above New Orleans will have to be relocated. Once that’s done, the second phase of dredging from New Orleans to Baton Rouge can begin.

Global Shipping Outlook: A Sneak Peek at 2021
Port Performance North America: Managing Cargo Flow During a Pandemic — and Beyond
END_OF_DOCUMENT_TOKEN_TO_BE_REPLACED