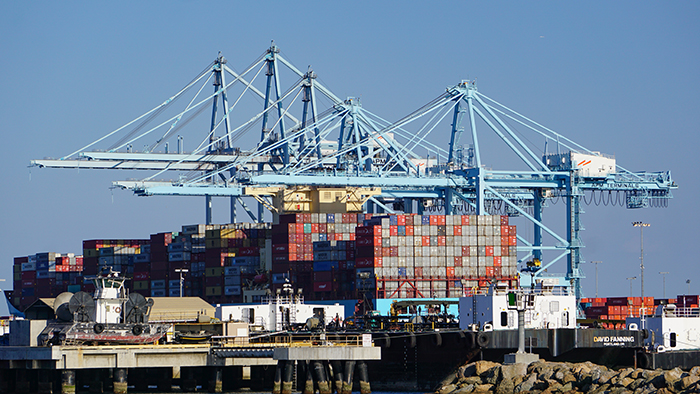 Shippers' frustration with their inability to pick up containers and return empties at the Los Angeles-Long Beach port complex is rising, as thousands of dollars worth of detention and demurrage charges are accumulating owing to an unusual period of congestion.

The front-loading of US imports from China to beat higher tariffs on $200 billion of goods ahead of a now-delayed Jan. 1 deadline and longshore labor not working the Christmas holidays Dec. 24-25 has put atypical pressure on the largest US import gateway. The head of each port on Dec. 18 pledged relief within six months, as container dwell times hit the highest level in two years and truck turn times are rising.

While importers have already rushed much of their cargo to beat the Jan. 1 deadline, which has now been delayed until March 1, and there are limits to how much Chinese factory production can be scaled up in short notice, it’s been unclear just how much cargo can still be front-loaded. Despite falling eastbound spot rates, three container lines' executives warned JOC.com of January tightness on ships and terminals due to a surge of cargo ahead of Asia factories closing for Lunar New Year celebrations, which begin Feb. 5.

“Congestion in LA and Long Beach is now at peak, which normally occurs in November,” an apparel shipper told JOC.com. “Appointments are full and nearly all containers are at LFD [last day free]. Another trend is that more draymen are automatically placing in their tariff a minimum five days' chassis rental to cover congestion upon empty returns.”

Shippers are having trouble evacuating their import cargo, largely due to a lack of available appointments, placing them at risk of paying demurrage fees. Shippers and carriers generally contract with one another for a specific amount of so-called free time. Demurrage penalties are assessed when import boxes are held at container terminals beyond the agreed-upon number of free days, while detention is assessed when the number of agreed-upon days before an empty container is returned to a terminal has expired.

Eric Klein, CEO of the container terminal visibility software provider Crux Systems, tweeted Wednesday that he sees a “disaster” looming in the ports. “There are significant backlogs of cargo not getting out of terminals. Will the free time be extended? The signs of this coming were certainly there. What I see now is the disaster in progress. The average demurrage bill I'm seeing is over $3,000 per container. This was all avoidable.”

In situations where congestion builds, the temptation is to find a party to blame. The question is whether individual shippers should have foreseen the collective volume surge, induced in large part by the Trump administration’s threat to increase tariffs on a wide range of Chinese-made goods from 10 percent to 25 percent in Jan. That threat has been pushed to early March after trade talks between the administration and its counterparts in Beijing, which potentially heralds another surge of volume around the Chinese New Year.

A footwear importer told JOC.com that his goods were not part of the pre-tariff surge, but he has been impacted by the Southern California congestion nonetheless.

“We were doing our normal shipping,” he said. “It seems the steamship lines/ports were not prepared for the surge. The problems started with voided [sailings], weather conditions in China, sweepers to fill the void, and freight not arriving on time. The bottom line is there are x number of steamship lines carrying a defined number of containers into x number of terminals. I’m not sure where the blame should be. But as I've asked many times without a response, ‘what did the BCO [beneficial cargo owner] do wrong that we should be penalized with fees for demurrage and/or detention? And every detention charge comes with additional chassis charges.”

Jon Gold, vice president of supply chain and customs policy at the National Retail Federation, told JOC.com that he has not heard reports from members about undue levels of congestion, nor detention and demurrage accruing.

“So many people pushed volumes up to beat the deadline of Dec. 31,” a freight forwarder told JOC.com. “Some warehouses can’t take it all at this point. Many truckers can’t get the volume off the pier fast enough. I got a call while on vacation from a customer asking for help finding capacity for 100 containers this week alone coming off the pier above what their normal weekly volume is. I think it’s really [because of] the change in shipping plan to beat the Jan 1 implementation date.”

The apparel importer, meanwhile, said the unusual December congestion has even spread to the Port of New York/New Jersey, affecting the company’s inland point intermodal containers. “Some containers are sitting for two weeks before going on rail out of PNCT [Port Newark Container Terminal].”

Executives at the Southern California ports, which are on track this year to handle a combined total of more than 16 million TEU, conceded that terminal congestion and equipment shortages are plaguing the harbor, and proposed about a dozen action items to alleviate the congestion. But many are long-term projects.

Chassis shortages due to the hoarding of equipment by some terminal operators, and BCOs’ increasing use of import containers and the chassis they are resting on as an extension of their warehouses, is one of the biggest contributors to port congestion.

The chassis shortage has

Permalink Submitted by rogerpassie@gma... on Dec 29, 2018 1:36AM EST
The chassis shortage has truly impacted the flow of goods (import/export), increased congestion, catalyzed container yard stock-piling, and put importers and exporters in a bind (financially). This problem (chassis shortage) can be fixed by making intermodal transportation the key actor for reducing container congestion. Solution: all major ports need to have a rail system as an umbilical network for kinetically moving containers almost directly from the ships to its destination in the hinterland! Naturally... it is going to take investors and an overhead cost to plan, approve, build, and maintain the ports' umbilical rail systems. What are your thoughts? By Roger Passie

The chassis shortage has

Permalink Submitted by rogerpassie@gma... on Dec 29, 2018 1:36AM EST
The chassis shortage has truly impacted the flow of goods (import/export), increased congestion, catalyzed container yard stock-piling, and put importers and exporters in a bind (financially). This problem (chassis shortage) can be fixed by making intermodal transportation the key actor for reducing container congestion. Solution: all major ports need to have a rail system as an umbilical network for kinetically moving containers almost directly from the ships to its destination in the hinterland! Naturally... it is going to take investors and an overhead cost to plan, approve, build, and maintain the ports' umbilical rail systems. What are your thoughts? By Roger Passie

First on the demurrage and

Permalink Submitted by ferrullig@minds... on Dec 31, 2018 11:37AM EST
First on the demurrage and detention, the large volumes of pre-tariff increase was a huge factor and caused by shippers who wanted to beat the Jan. 1st increases. Why give additional free time to those who caused a great deal of the problems. Shortages of chassis, congested terminals are factors of the volumes. Not than many days ago there were articles of warehouses being full and containers having to wait to get unloaded, those are just facts and shippers simply don't want to pay for extended times needed to handle the volumes and extended times in getting containers unloaded. On Rogers below, no doubt that on-dock will significantly improve the gate congestion, truck shortages, drays to distant rail terminals. But about 40% of the freight coming into LA/LGB is local and can't move by rail. The on-dock rail will alleviate the competition for trucks, chassis, gate times etc The Middle Harbor project at Long Beach will handle significant rail movements, and some on-dock facilities are already in play. So that is going to help, but until crane productivity is at 40 moves per hour per crane, great improvement at access to cargo won't happen, you can't put it on the rail while it sits on the ship and at 28 mover per hour (sometimes less) the terminals can't be truly efficient.

Quick fixes not the answer for US supply chain woes

Solving for Uncertainty: A Guide to Variable Transportation Budgets
END_OF_DOCUMENT_TOKEN_TO_BE_REPLACED