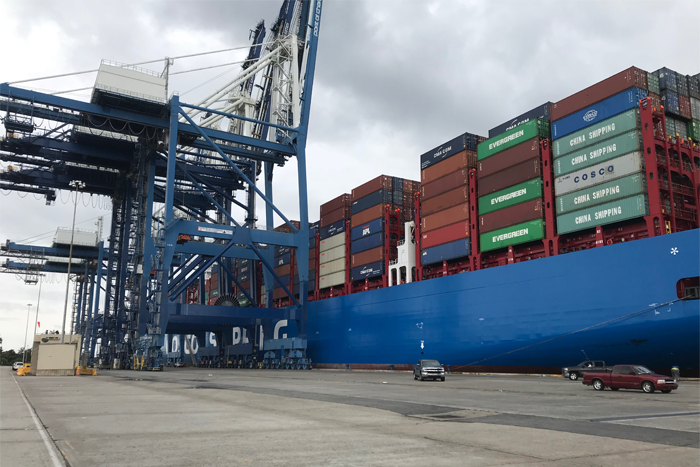 The Wando Welch Terminal. The Army Corps of Engineers awarded a contract for the final phase to deepen the inner harbor to the Wando terminal to 52 feet. Photo credit: Ari Ashe/JOC.com.

Projects to deepen the inner harbors of the ports of Charleston and Savannah are moving forward after the US Army Corps of Engineers awarded two contracts this week for dredging work meant to ease vessel berthing delays due to tidal restrictions.

Both contracts — $133.2 million for Savannah and $124.5 million for Charleston — were awarded to Norfolk Dredging Co. The total price tag in Savannah will be about $973 million, while Charleston’s work will cost $558 million.

The port of Savannah’s inner harbor will be dredged to 47 feet. Work on the outer harbor was completed last year, with the inner harbor work beginning shortly thereafter. The shallow harbor is one reason vessels tend to bunch outside the Garden City Terminal, slowing the time it takes to enter and discharge containers. The estimated completion date on the contract is Sept. 6, 2021.

Work will deepen the inner harbor into Charleston’s Wando Welch Terminal to 52 feet. Awarding of the contract was delayed after initial bids were higher than anticipated. Norfolk Dredging came in with the lowest bid. Estimated completion date on the contract is July 5, 2022 and requires the removal of 11 million cubic yards of material. Dredging to deepen the channel entrance to 54 feet began in February 2018 and is scheduled to be complete in late 2021 or 2022.

Savannah and Charleston are not the only dredging projects taking place along the US East Coast. Jacksonville is deepening its harbor to 47 feet to the Blount Island Terminal, which is due to be completed in 2023. The port of Philadelphia recently completed its deepening project to 45 feet. The port of Boston has proposed projects to dredge to 47 feet, Everglades to 48 feet, New Orleans to 50 feet, and Virginia to 55 feet.

Baltimore and New York and New Jersey already have 50-foot inner harbors during mean low tide with no plans to dig deeper.

Growing volumes through Savannah and Charleston demonstrate the need for the deeper ports.

Laden volume in Savannah has increased 4.6 percent year over year through July, while Charleston’s laden volume rose 2.6 percent during the same period. Intermodal volumes have grown double digits year over year in both ports, which officials believe will continue as larger vessels regularly call their terminals.

Each hope to capitalize on volume growth, with Savannah expanding its intermodal rail yard and Charleston building out connections to Greer and Dillon, South Carolina.

“We are thrilled to see this contract awarded as this is a crucial component of the Charleston Harbor Deepening Project,” Jim Newsome, South Carolina Ports Authority (SCPA) CEO, said in a statement. “We will have the deepest harbor on the East Coast at 52 feet, enabling SC Ports to handle increasing cargo volumes and growing ship sizes without tidal restrictions. This project is vitally important to ensure long-term growth in South Carolina and throughout the Southeast.”

The contract also calls for Norfolk Dredging to widen the turning basin by about 200 feet to 1,650 feet, which makes it easier for a 14,000-TEU vessel to navigate the inner harbor.

“The resulting 52-foot depth and widened channels will allow two 14,000-TEU-and-above ships to effortlessly pass one another and access the container terminal without tidal restrictions,” Barbara Melvin, SCPA chief operating officer, said in the statement. “Combined with the ongoing dredging work to deepen the entrance channel to 54 feet, large vessels will be able to easily navigate the deepened segment from the ocean to Wando Welch Terminal.”

A future project phase will deepen to 52 feet the Cooper River, which feeds into the Leatherman Terminal in North Charleston. The new container terminal is due to open in 2021.