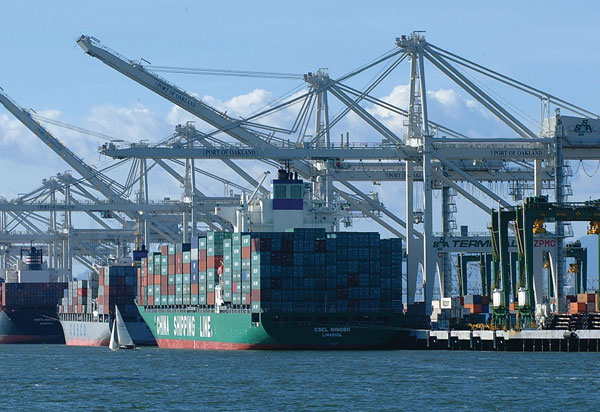 A significant change in the relationship between shipping lines and marine terminal operators is under way, with carriers placing less emphasis on owning and operating their own facilities and more emphasis on reducing costs and preserving capital.

“The days of ocean carriers having their own marine terminals are waning,” said Tay Yoshitani, executive director of the Port of Seattle.

Seattle isn’t alone in exploring options that some believe could lead to terminal consolidation. In Oakland last summer, three small facilities operated by SSA Marine, APL and Total Terminals International were combined into one terminal of more than 300 acres that is now operated by SSA.

Seattle has joined those three terminal operators in seeking permission from the Federal Maritime Commission to discuss with antitrust immunity operations, facilities, services, efficiency enhancements and other measures that will lead to a reduction in operational costs at the port.

Yoshitani said the direction the discussion group would take if it’s approved is uncertain, but all options will be on the table. “The terminal operators feel there is a need to do something,” he said. “We just don’t know what it will be.”

In the case of Seattle and Oakland, the driving force behind possible consolidation is clear. The ports had been balkanized into small terminals, each tied to the fate of one anchor tenant. The container volume that each line generates doesn’t produce enough revenue for the terminal to operate profitably.

Simultaneously with this development is a move among carriers to consolidate their operations through vessel-sharing alliances. Many of the carriers in the major east-west trades operate in VSAs. By sharing vessel space, the lines can increase their coverage in a given trade lane while reducing the number of costly ships each partner must contribute.

At the same time, carriers are investing hundreds of millions of dollars in large vessels capable of carrying 8,000 to 18,000 20-foot-equivalent container units. The mega-ships create huge operational demands on port facilities, and the 100-acre terminals of yesterday are simply too small to accommodate the big ships.

The proposed P3 Network among Maersk Line, Mediterranean Shipping Co. and CMA CGM, the world’s three largest container carriers, indicates that even the biggest carriers feel a need to reduce operational costs while maintaining their broad-based service to customers.

A residual of the carrier alliances is that it gives shipping lines tremendous power in choosing the ports and terminals their vessels will call, and how much they are willing to pay for terminal operating services. “Carriers are in the driver’s seat,” said Paul Bingham, economics practice leader at Wilbur Smith Associates. “That is not the primary reason why they are forming alliances, but it is an outcome of the alliances.”

Carriers are feeling the same price pressures in their relations with customers. Retailers and other cargo owners are taking advantage of severe overcapacity in the liner industry to drive freight rates down to low levels. For example, the Shanghai Containerized Freight Index covering major trade lanes was 24.9 percent lower at the end of September than it was at the same time last year.

“These lines have been hammered,” said Chris Lytle, executive director at the Port of Oakland. Declining freight rates, high fuel costs and large expenditures for modern, fuel-efficient vessels have taken a toll on their bottom lines, and the carriers are turning around and pressuring ports and terminal operators to lower their costs, he added.

The drive to cut costs is accompanied by an interest among carriers to return to the business they know best, which is to operate vessels in port-to-port services and leave it to third-party logistics companies, public terminals and equipment providers to book cargo, operate terminals, arrange for intermodal transportation and provide equipment.

This return to basics is a 180-degree change from the past decade when many shipping lines wanted to control as much of the supply chain as they could. That control included owning and operating marine terminals. Carriers and their marine terminal affiliates could guarantee to customers that the vessels carrying their cargo would be given priority at whichever gateway they chose to enter the country.

In today’s brutal rate environment, carriers can’t afford to guarantee this premier, exclusive service to their customers. Most beneficial cargo owners are unwilling to pay higher rates to carriers that operate their own terminals.

“There are not enough operational differences to warrant that the lines have their own terminals,” Bingham said. The picture is further muddled by the alliances. It’s now common for a BCO to book cargo with one line, see the containers carried on a vessel operated by another line in the alliance, and to retrieve the containers at a public terminal unaffiliated with any of the alliance partners.

In the northern West Coast ports, industry analysts say it’s not far-fetched to think terminal consolidation will continue until each port is dominated by one or two public terminal operators.

In a time where shipping