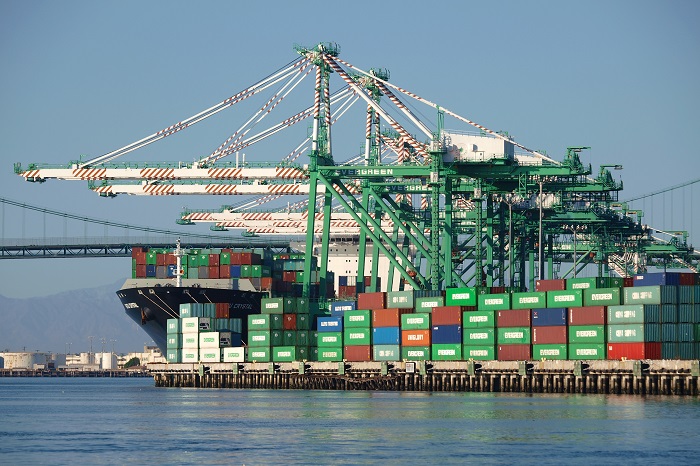 It is early in the container shipping tech era, but the prospective changes appear to be promising, for companies and longshoremen alike. Photo credit: Shutterstock.

NEWARK — Expectations of improved cargo flow for shippers, reduced labor costs, and clean energy are motivating terminal operators to invest in at least some degree of automation and electrification of cargo-handling equipment, according to a marine engineer and port planner.

Further, although it is early in the container shipping automation/electrification era, the prospective changes appear to be "win/win" — lower costs for operators and increased man-hours for longshoremen, as a result of increased container volumes.

Automation is not a new concept. Some terminals in the Netherlands and Germany have been automated for 20 years. In the United States, the only fully automated terminals are the TraPac facility in Los Angeles and Middle Harbor in Los Angeles. Automated yard equipment and horizontal transport are “most appealing in high-labor cost environments,” he said.

The software needed to fully automate terminals is quite complex because the terminal operating system must coordinate and communicate with the actions of individual systems throughout the facility.”Software is harder to perfect than hardware,” Sisson said.  “Several systems may have to talk to each other to execute each move,” he said. Even after a fully automated terminal opens, it can take a year or longer to work out the software glitches.

However, the labor savings inherent in high-volume automated terminals are compelling. Some 40 percent or more of manual jobs are eliminated. When considering just the yard tractors, or UTRs, that shuttle containers from the vessel to the container stacks are considered, operators can save millions of dollars per year because each terminal has dozens of manually operated UTRs that handle thousands of containers each day.

Longshore unions keenly dislike full automation. This is especially true on the East Coast, where the Global Container Terminal in New Jersey and two ports in Virginia have turned to semi-automation. The main yard functions are automated with automated stacking cranes replacing rubber-tired gantries. However, UTRs are driven by longshoremen. The International Longshoremen’s Association (ILA) earlier this month cited automation as a reason why talks broke off on a contract extension.

Electrification on its own does not eliminate jobs. Ship-to-shore cranes at most ports are electrified. Rubber-tired gantry cranes, top picks, strad/shuttles, terminal tractors, and street trucks that call at marine terminals are either in use at some terminals or are in an advanced development stage where they should be made commercially available in the next decade, Sisson said.

Electrification has cost and environmental advantages. Although the initial cost today is somewhat higher, although not substantially more than conventional diesel units, the cost of batteries continues to come down. Sisson said the cost of a lithium-ion battery has dropped from $1,000 in 2010 to $273 today. Electrification, be it plug-in or battery powered, produces cost savings over the life of the vehicle. Also, since electric vehicles have fewer moving parts, maintenance and repair costs over the life of the units is lower than for diesel-powered units.

The pollution-reduction benefits of electrification are huge because these are near-zero or zero-emission vehicles. Some operators, such as APM Terminals and the Georgia Ports Authority, are moving rapidly and steadily toward electrifying some types of cargo-handling equipment. The mayors of Los Angeles and Long Beach recently announced their intention of having near-zero emission ports in the coming two decades. The ports have set guidelines for zero-emission cargo handling equipment by 2030 and street trucks by 2035.

Although some terminal operators are still skeptical about the affordability of electric units, Sisson said technology is advancing rapidly, and when commercial production is reached, total costs of electrified equipment will be close to, if not lower than, diesel-powered units. Citing yard tractors, in a pessimistic scenario, he said the cost per container move for an electric unit is slightly more than $9, compared with slightly less than $9 for a diesel-powered unit. However, in an optimistic scenario, the cost per container move drops to almost $5 a move.

Fully automated terminals also shine during labor disruptions such as the International Longshore and Warehouse Union (ILWU) work slowdowns during the 2014 to 2015 coastwide contract negotiations. For two months, the ILWU starved yard crane operations in Los Angeles-Long Beach by each day dispatching three or four operators, down from more than 120 per day in normal times. The ports went into gridlock and did not fully recover until about six months later. That tactic did not work at the automated terminals, which have driverless cranes.

The hard-timing of most of the terminals in 2014 to 2015, in the long run, could work to the disadvantage of the ILWU. The two automated terminals got through the job actions relatively well, but the 10 manual facilities accrued millions of dollars in added labor costs. Although guarding against risk during labor disruptions will not, on its own, cause a terminal operator to automate, it will enter into the decision-making process.

One final and compelling argument for automation is that many US ports have no more land available for developing marine terminals, so they will have to densify their operations and push more volume per acre through their existing facilities. Automation enables terminals to stack containers higher and wider without harming productivity and operating costs. For example, the Middle Harbor terminal in Long Beach at full build out will have an annual capacity of more than 3 million TEU, or about twice its former capacity. The ports of Los Angeles and Long Beach project that by 2040 the port complex will handle 40 million TEU. Using current manual processes at most of the terminals will result in the ports using up all of their capacity by about 2030.

And then there is this counter-intuitive fact: by enabling the ports to accommodate greater volumes in the years ahead, automation will actually result in job creation for longshoremen. Jim McKenna, president and CEO of the Pacific Maritime Association, told the Port Performance conference that even with the use of computer technology, which was negotiated into the 2002 contract and was feared would eliminate ILWU marine clerk jobs, and automation, which was part of the 2008 contract, man-hours did not decline. Rather, West Coast ports today are moving more cargo with the same amount of labor, and if container volumes double by 2040 as projected, man-hours will increase.

Permalink Submitted by ferrullig@minds... on Dec 19, 2017 7:16AM EST
Very contradictory assumptions in the analysis: a 40% reduction in labor force due to automation but a gain in headcount due to volumes?? What volume gain would you have to have to offset a 40% reduction in labor requirements to get a new gain in headcount? At minimum 40% and at a growth rate of 5% a year, it will take a while and will the unions accept the wait? The first issue of course is getting the ILA an ILWU to consider and accept automation in some form. There are precedents as stated in the article, there are also very loud proclamations from both unions that they won't accept automation. Contradictions in this industry is not new,so it is a wait and see situation.