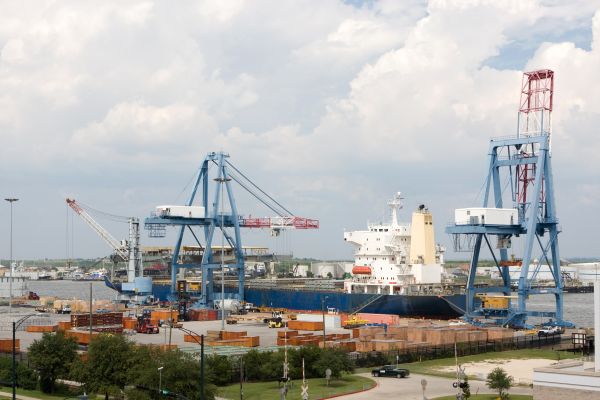 Containerized cargo at Gulf ports is benefiting from a north-to-south shift in U.S. population growth, growth in the region’s automotive and chemical industries and investment in container-handling facilities.

A higher-capacity Panama Canal could add to that equation. Port officials wax optimistic about prospects for increased volume from the new canal locks, which have been the center of a high-stakes contract dispute, but they concede that no one knows exactly how much or little of a bonanza the Panama project will bring.

Bulk carriers and tankers may be the first to benefit from a higher-capacity canal. The Big River coalition, a collection of ports, carriers and cargo interests, has been lobbying for funds to deepen the lower Mississippi’s channel, currently 45 feet, to the 55 feet authorized in 1986 at the height of a coal export boom.

Container ships with capacities as large as 9,200 20-foot-equivalent units have called at Gulf ports, but the workhorse vessels at Houston, New Orleans and Mobile remain ships in the 3,500- to 6,500-TEU range.

Houston hopes to win permits this year to begin enlarging its 40-foot-deep channels to its Bayport and Barbours Cut terminals. The port authority plans to pay the cost of widening the channels and deepening them to 45 feet to match the dimensions of the port’s main channels. Houston also continues to add capacity to Bayport and Barbours Cut to prepare for expected growth in cargo and ship sizes.

Port officials at Houston hope the larger canal locks will encourage other carriers to add services to feed retail import distribution centers that have sprung up in and around Houston during the last several years. The Texas port already has two weekly all-water Asia services — CMA CGM and a vessel-sharing agreement between Cosco and Hanjin.

Houston handles two-thirds of all containers moving through Gulf ports, and is the only port in the region among the top 10 in containerized imports and exports tracked by PIERS, the data division of JOC Group Inc.

Annual loaded imports and exports for the entire region are about 2.4 million TEUs, less than one-fourth the combined annual volume at Los Angeles-Long Beach, the busiest U.S. container port complex.

Increases in trade with China, Brazil, India and Turkey led growth in containerized imports and exports through Gulf of Mexico ports.

Brazil is the top destination for containerized exports from Houston and from Gulf ports overall. In the first 11 months of 2013, carriers moved 103,203 TEUs to Brazil through Gulf ports, compared with 81,779 TEUs in the comparable period of 2012.

China also is the top origin country for Gulf containerized imports, with 180,756 TEUs in 2013.

Guatemala is the No. 2 source of containerized imports through U.S. Gulf ports, with 73,353 TEUs during 2013. Most of these shipments, which vary little from year to year, are bananas and other fruit moving through Gulfport, Miss., and Freeport, Texas.

Houston and New Orleans are benefiting from a resurgence in investment in U.S. chemical manufacturing. Companies have announced some $35 billion in capital investment in petrochemical plants along the Houston Ship Channel. New Orleans officials say the port’s chemical exports have tripled in the last five years and totaled some 2 million tons last year.

Much of Mobile’s import growth has come in the form of components for automobile assembly plants that have sprung up in Alabama and adjacent states. South Korea is Mobile’s top source of imports, with 28,880 TEUs last year, followed by China with 14,266 TEUs and Germany with 6,119 TEUs.

Gulfport has been trying to diversify beyond its core business of fruit imports and backhaul exports to Central America. After Hurricane Katrina leveled its facilities in 2005, the Mississippi port announced plans for a major expansion that included trucking in dirt to raise the port’s elevation to 25 feet. Mississippi officials have scaled back those plans and now are concentrating on using available funds to restore the port’s shipping channel to its authorized 36-foot depth.