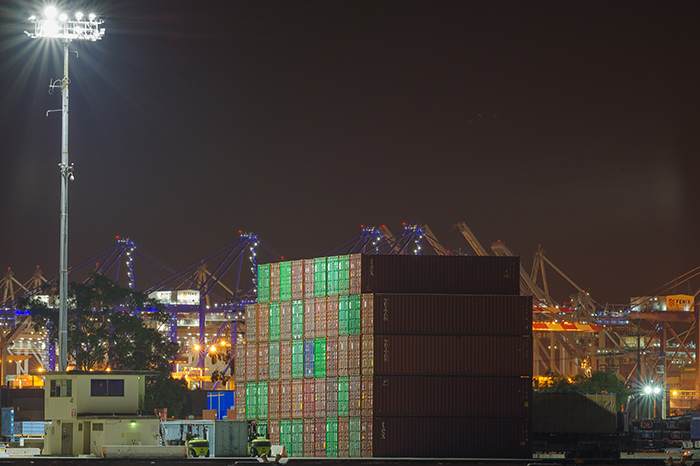 While macroeconomic data is pointing to a slowdown in US consumer spending, which in theory should relieve pressure on badly congested ports, a host of thorny issues within and beyond freight transport are stubbornly obstructing restoration of normal containerized cargo flow. That is why a once-in-a-­generation intervention by the White House on Oct. 13 to resolve port bottlenecks in Southern California faces steep challenges, especially if the goal is to “save Christmas.”

Case in point: the deceptively simple idea of expanding terminal hours at the ports of Los Angeles and Long Beach. Long Beach in September moved to a 24/7 operation, and the Biden announcement said Los Angeles, which had been resisting, will also begin round-the-clock operations by adding new off-peak nighttime shifts and weekend hours, which would nearly double the hours that cargo will be able to move across the port’s docks.

But as is well known, for throughput capacity at the busiest North American gateway to be expanded into the overnight hours, coordinated action is required from terminals, truckers, and distribution centers effectively acting as an integrated system. That is the difference between export ports similar to those in China, where the port is the end of the process and cargo can show up any time from any origin point, and an import gateway, where the port is the beginning of a process and cargo has to move onward from the port via truck or rail, through distribution centers and onward to consumers.

And yet, key players in the system have never acted effectively in a coordinated fashion. Importers, for example, are generally unwilling to keep distribution center (DC) gates open 24/7 to receive containers during overnight hours. Other import gateways such as New York-New Jersey have battled this issue for years, with little to show for it.

As the Biden statement pointed out, “Unlike leading ports around the world, US ports have failed to realize the full possibility offered by operation on nights and weekends.”

It is part of a culture within transportation of limiting costs but also of prioritizing self-interest.

“A big part of the solution is us in the supply chain working better together and caring for more than our own selfish interests,” Jim Newsome, CEO of the South Carolina Ports Authority, said in his induction speech at the International Maritime Hall of Fame in New York on Oct. 5.

As Long Beach discovered in the weeks since its expanded hours went into effect, simply staying open longer accomplishes little if the truckers don’t utilize those additional gates. That, in turn, is due partly to their inability to deliver containers to distribution centers because they’re not open or are full.

The Biden announcement explicitly acknowledged this challenge, noting that Walmart, UPS, FedEx, Samsung, Home Depot, and Target have committed to moving a total of 3,500 containers off the docks per week during overnight hours through the end of the year. Although that only represents about 3 percent of total current weekly import volumes at Los ­Angeles-Long Beach, the administration is hoping others will follow. “These commitments provide a clear market signal to the other businesses along the transportation supply chain — rails, trucks, and warehouses — that there is demand to move additional cargo at off-peak hours,” the White House said.

But it would be a major change from past practice. “It’s happening more, but it’s a minority of BCOs [beneficial cargo owners]” that are willing to keep receiving facilities open and dispatch drayage truckers to perform night moves, JOC.com senior editor Ari Ashe wrote recently.

Even getting warehouses to receive containers during off hours is impeded by macro-trends exerting their own disruptive influence, including the fact that those DCs are largely filled up. It’s not just that consumer spending in 2020 swung to home improvement goods that move by container, but that the shift from brick-and-mortar retail shopping to e-commerce resulted in four to six years of forecast e-commerce growth taking place in a single year, volumes that required much greater DC capacity than currently exists, and new construction has yet to catch up.

If containers can’t be brought anywhere out of the port, the ports fill up. That’s why there were still 61 container ships waiting outside of the Los Angeles-Long Beach port complex as of Oct. 11.

Port congestion behind November dip in US imports from Asia

Navigating the Winding Roads This Peak Season & Beyond
END_OF_DOCUMENT_TOKEN_TO_BE_REPLACED