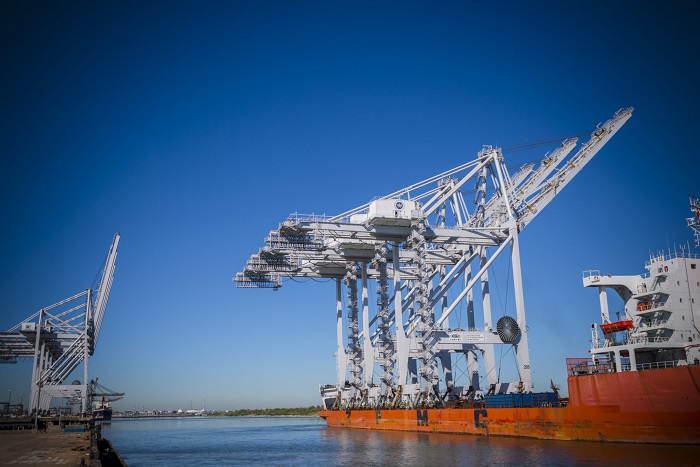 Houston and other Gulf ports expect to benefit from an increase in exports of synthetic resin pellets from plants that producers are building in Texas and Louisiana. (Above: Cranes at Port Houston.) Photo credit: Port Houston.

HOUSTON — US Gulf ports this year are forecast to post containerized volume growth of 6 percent for imports and 2 percent for exports, assuming no trade war breaks out, analyst Daniel Hackett told the JOC’s 3rd annual Gulf Shipping Conference on Tuesday.

“The trade war, if it materializes, may impact that,” said Hackett, partner in Hackett Associates, which produces the monthly Global Port Tracker for the National Retail Federation. Gulf exports could exceed forecasts if the long-delayed boom in exports of synthetic resins from the region materializes soon, Hackett said.

Houston accounts for two-thirds of Gulf ports’ container volume, which last year totaled 3 million TEU overall, a jump of 11.4 percent from 2016, according to PIERS, a sister product of JOC.com. Gulf imports rose 17.1 percent, to 1.52 million TEU — for the first time surpassing exports, which increased 6.1 percent to 1.49 million TEU.

Houston and other Gulf ports expect to benefit from an increase in exports of synthetic resin pellets from plants that producers are building in Texas and Louisiana to capitalize on low-cost feedstocks of fracked natural gas.

The start-up dates for several of those plants have been pushed back because of construction delays and disruptions from Hurricane Harvey, but the long-awaited increase in production is starting to happen, said Joel Morales, director, polyolefins, Americas, at IHS Markit, parent company of JOC.com.

Morales said several plants scheduled to open in 2017 have begun operation, and that IHS Markit reported record production and 92 percent capacity utilization in March. “We think we’re seeing the ramp up right now,” Moraels said. “All the plants have started that were expected in 2017. Now the question is how fast they get up to the 95 to 96 percent rates.”

IHS Markit has upgraded its production estimate and now expects that resin plant startups last year added about 3.2 million metric tons of capacity in 2017, equivalent to some 260,000 TEU. Plants under construction are expected to add about 260,000 TEU worth of production from 2018 through 2020. Most of this is ticketed for export, primarily to China.

Additional projects planned for construction in 2021 or later would add about 6.2 million tons of production, or nearly 500,000 TEU, but some of those projects are likely to be canceled, Morales said.

Frank Vingerhoets, Americas president at Katoen Natie, said he is anxious for resin exports that will fill unused capacity added in anticipation of increased volume. Katoen Natie has expanded its Houston facilities, has opened a packaging warehouse in Baton Rouge, Louisiana, and is developing a large bulk-to-container transloading center in Dallas.

Morales: tariffs would not significantly affect US resin exports

Like other importers and exporters, resin producers are watching the tweets and threats that resin exports could be caught up in an incipient trade war between the United States and China, where most of the new demand is expected to come.

Morales said he does not expect tariffs to significantly affect US resin export volume. He said exports affected by announced tariffs account for only a small percentage of US resin exports to China, and that resins are a fungible commodity that will move to other markets if China clamps down on imports from the United States.

John Slangerup, chairman and CEO of American Global Logistics, said the bickering complicates supply chain planning but appears unlikely to cause wholesale supply chain disruptions. “I think we’re going to see a polite tit-for-tat type of approach, and I don’t see any sign that it's going to evolve into anything worse than that,” he said.

The industry consensus seems to be that Gulf ports will be the first choice for regional resin exporters, but that additional volumes will move via other routes, led by intermodal routings via the West and East coasts. “The system will figure it out, based on optionality,” Morales said.

Christian Jensen, president of Jensen Companies, whose TCI Packaging bags Louisiana-produced resins for export from New Orleans, said Gulf ports’ proximity to production and investment in supply chain capacity should keep much of the resin cargo within the region.

“The farther you get from the source in a supply chain, the more things can go wrong and the more costly mistakes can be,” Jensen said. “ We’re clearly ready to keep it here.”